It's June 18th and time for my annual celebration of my favorite creative person, Paul McCartney! McCartney's friend and collaborator, Barry Miles, summed up their early years by saying, "I think of the 60s as a supermarket of ideas. We were looking for new ways to live." If Swinging London in the 1960s represented a hurricane of cultural revolution, McCartney was in the eye of the storm. On his 78th birthday, Spy Vibe looks back at the art of Paul McCartney. Photo below: in true space-age fashion by Richard Avedon. 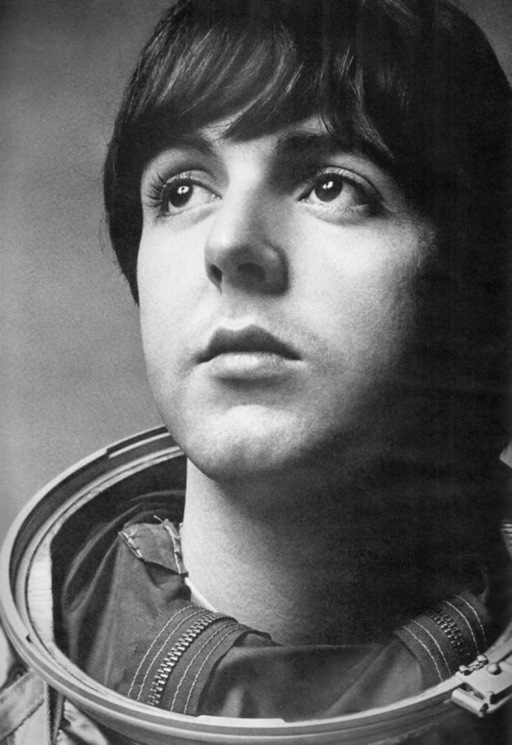 Paul McCartney was born seventy-eight years ago today. His mother Mary (as in "mother Mary comes to me, speaking words of wisdom") was a nurse. His father, James, was an amateur musician with a local jazz band, and he brought Paul and younger brother Mike up with an appreciation for all kinds of music. The family enjoyed listening to old 78 records and to the radio, and McCartney developed a keen ear for the classics and a passion to make music of his own. After a brief interlude with a trumpet, Paul went to see Lonnie Donegan perform at Liverpool's Empire Theatre on November 11, 1956 and was swept up in the new Skiffle craze. He swapped his horn for a Framus Zenith acoustic model and began strumming away. It wasn't until he saw an image of Slim Whitman that he realized he could restring the instrument backwards for easier playing as a lefty. As Lonnie Donegan belted out Rock Island Line and other Skiffle hits during the era, McCartney wrote his first tunes- including When I'm Sixty-Four! In 1956, he found his "messiah," Elvis Presley. Elvis opened the floodgates of Rock and McCartney became a devotee of Fats Domino, Little Richard, Buddy Holly, and the Everly Brothers. Photo below by brother Mike McCartney (of The Scaffold): playing guitar in his back yard at 20 Forthlin Road, Liverpool. Although Paul has said in interviews that he has sad memories of the house -because of his mother's early death- the home is quite cheerful these days. I visited inside a couple of years back and found the rooms filled with light, family photos, and a vibe that said "the more the merrier!" 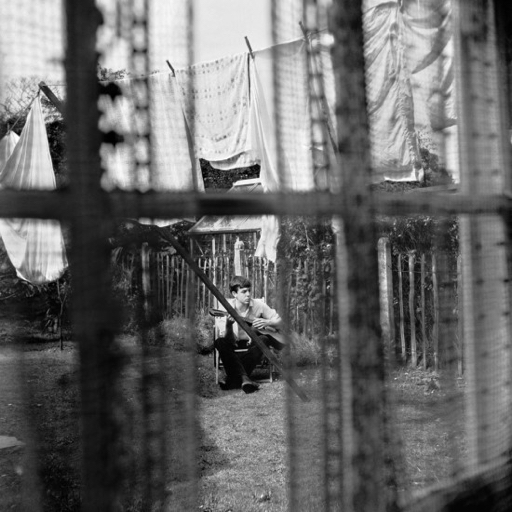 McCartney's childhood friend, Ivan Vaughan (also born on June 18th), brought him to the Woolton County Fete at St. Peter's Church on July 6, 1957, where he formally met John Lennon for the first time. The two boys shared a love for Rock n Roll, especially two rockabilly cats that would tour England quite a bit in those early years: Eddie Cochran and Gene Vincent. Vincent is seen seen in the photo below with Paul and John in matching leather gear. As the story goes of that first meeting at the Fete, McCartney impressed Lennon with Cochran's Twenty-Flight Rock and Lennon played Vincent's Be-Bop-A-Lula for the first time on stage. McCartney soon joined Lennon's band and history followed from The Quarrymen to The Beatles, Hamburg, The Cavern, Beatlemania, movies, world tours, Sgt. Pepper's, Abbey Road, and beyond. 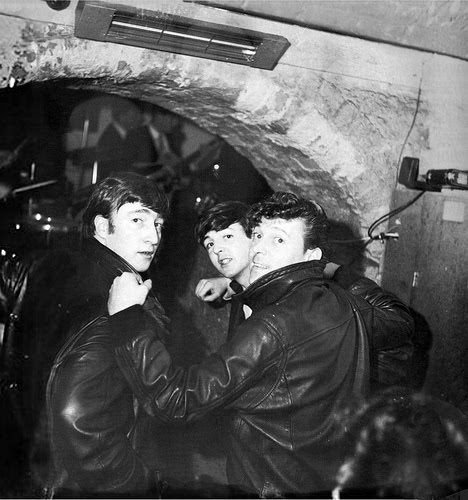 While juggling the busy Beatles schedule, McCartney was a man about town in the mid-60s, soaking up inspiration from all corners of the arts. While his bandmates moved out to the suburbs, Paul helped Barry Miles start the underground paper, International Times, and they attended happenings at the Roundhouse with performances by Beat Poets and The Pink Floyd. McCartney got interested in arty film screenings and began to make his own experimental movies (his footage was later stolen). He also became fascinated with John Cage and the creation of tape loops and sound collages, which he called "electronic symphonies." McCartney's passion for experimentation fed back into a number of Beatles projects. In 1966 he met up with Delia Derbyshire and Brian Hodgson of the Radiophonic Workshop at Peter Zinovieff's garden studio space in Putney, with the idea of having them do an electronic version of Yesterday. Spy Vibers might know Derbyshire as the innovative sound pioneer who had created the experimental Doctor Who theme based on a score by Ron Grainer. Sadly no direct collaboration with Derbyshire followed, but Paul was exploring. Most notably during that same year, Paul recorded the seagull-sounding tape loops for Tomorrow Never Knows. In 1967 he premiered a 14-minute experimental piece called Carnival of Light at the Roundhouse (the piece has never been released), with Delia Derbyshire's project Unit Delta Plus and a soundtrack to a Yoko Ono film on the same bill. Many more projects followed, including the Sgt. Pepper's concept album, the formation of Apple subsidiary Zapple Records with Barry Miles, devoted to poetry and experimental music (including work by William S. Burroughs), and the Magical Mystery Tour film. McCartney later teamed with Sgt. Pepper's cover artist Peter Blake and other artists on an interesting album called Liverpool Sound Collage (2000).

When John Cage was creating Notations, a book of graphic scores with help from Yoko Ono, McCartney facilitated the inclusion of Lennon's hand-written lyrics to The Word (Rubber Soul). And McCartney helped to renovate and set up the Indica Gallery with Barry Miles, Peter Asher and John Dunbar in Mason's Yard, where Lennon would later meet Ono in person. Moving with the London in-crowd, it would prove to be one of the most creatively fertile periods for both McCartney and The Beatles. Photo below: Barry Miles and McCartney at Indica. 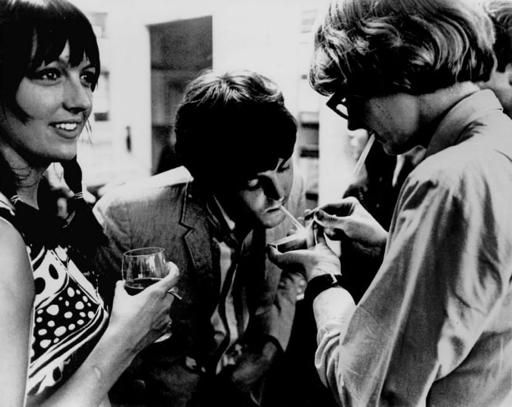 In addition to his playful (and prolific) approach to recording and touring, McCartney has also been involved as an activist for a number of important issues. He has spoken out for animal rights for decades and has been a spokesman for PETA. He organized the Concert for New York after the attacks in 2001. And recently in March 2018, he participated in the March For Our Lives against gun violence. Photos below: PETA campaign poster and talking to the press in NYC about how one of his best friends (John Lennon) was killed by gun violence. 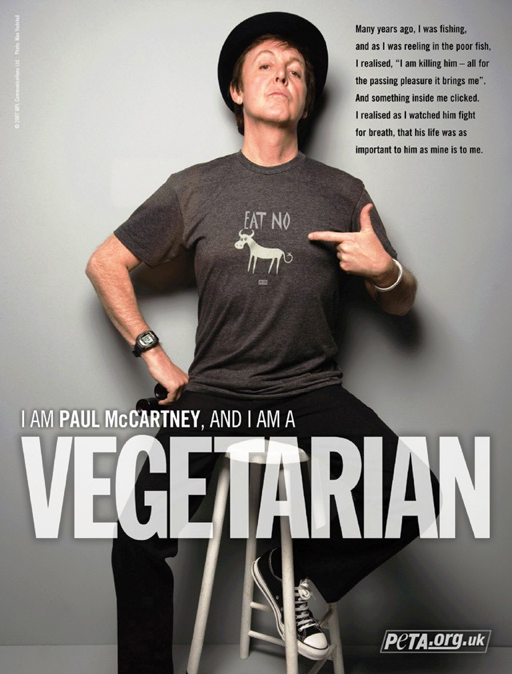 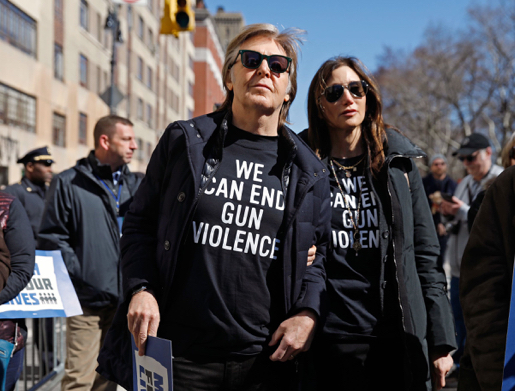 Paul McCartney has continued to explore mainstream and experimental projects each year since The Beatles disbanded in 1970. In the last twenty-five years, he has composed many classical music pieces, new electronic experiments, an anthology of poetry (including a memorial to childhood pal, Ivan), and he exhibited a large body of work as a painter. How does he manage it? If lifestyle is any clue to his creative output: jogging, family, laughter, music, and being meat-free seem to be the top of the list. Spy Vibers will, of course, celebrate McCartney's addition to the world of James Bond with his theme to Live and Let Die. Others may also applaud him for his Swinging-London style. It all comes back, however, to his deepest roots- music. That kid playing guitar in the backyard (photo above) is still driven by a love of performing. Spy Vibers can see for themselves during his on-going tours (currently postponed due to the pandemic). Check out the new archive editions of his 1997 album, Flaming Pie! Happy Birthday, Paul! Many Happy Returns from Jason at Spy Vibe.

Tour
Once we can all travel again, book a private tour in Liverpool with Jackie Spencer (and make sure to visit the Casbah Coffee Club and the Liverpool Beatles Museum). 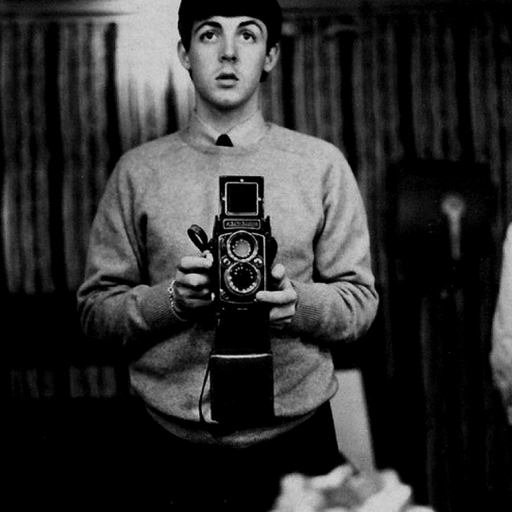