Screen Archives Entertainment is now taking pre-orders for their 2 CD set of soundtrack music from The Avengers! From SAE: "The double album includes an attractive 16 page booklet with full colour stills and extensive notes on music and episodes from the TV programme.

Alongside Johnny Dankworth and Laurie Johnson, Howard Blake is the third, none-the-less important, but often forgotten, contributor to The Avengers TV series music. Dankworth’s laid-back jazzy theme was the signature tune of the first three series, while Johnson penned the flamboyant rousing up-tempo theme to the three series shot on 35mm film. 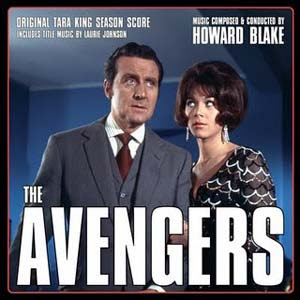 Brought into the job late in the series in 1967 by Laurie Johnson, and on the recommendation of Bernard Herrmann, Howard Blake scored ten episodes in the sixth and final series starring Linda Thorson as Tara King alongside the stalwart Macnee. From big-band sound with modern jazz inflections and spooky trombone choir, flutes and vibraphones, to bass clarinets, solo piano, timpanis, amplified harpsichord, 'wah-wah' guitar and Fender-Rhodes electric piano, Blake created a rich and relevant score that remains a classic to this day"

While you are on their website, be sure to check out other CD collections of spy soundtracks from I Spy, The New Avengers, The Girl From U.N.C.L.E., and The Man From U.N.C.L.E. They also carry the fabulous Network CD collection of The Prisoner.
Posted by Jason Whiton at 12:00 PM