Great news crossed my radar yesterday from The Unmutual. UK distributor Network is preparing to release Blu-ray editions of two Patrick McGoohan classics: Hell Drivers and All Night Long! Descriptions from Network: "When ex-con Tom (Stanley Baker - Zulu, The Guns of Navarone) signs up as a driver for a dodgy road-haulage company, he uncovers shady dealings going on between Red, the viciously ambitious foreman (Patrick McGoohan - The Prisoner, Danger Man) and Cartley, the sly, devious manager (William Hartnell - Doctor Who, The Army Game). The drivers are paid per job, a situation which encourages reckless and dangerous driving, and the stakes are raised when a fatal accident has Tom vowing revenge. A gritty classic, HELL DRIVERS was directed with verve by Cy Endfield (Zulu) who also co-wrote the BAFTA-nominated screenplay with John Kruse (The Saint). As well as top-flight performances from both Baker and McGoohan, the leads are ably supported by Herbert Lom (The Pink Panther), Peggy Cummins (Night of the Demon), Sid James (Carry On), Gordon Jackson (The Professionals), David McCallum (Sapphire and Steel) and Sean Connery (James Bond). All Night Long: Set amongst London’s Easy End Jazz clubs of the sixties, ALL NIGHT LONG tells the story of Johnny Cousin (Patrick McGoohan - The Prisoner), a manipulative and treacherous drummer with his eye on drawing a Jazz diva out of retirement for his own ends. Jealousy, passion and brooding menace all feature heavily in this moody classic which co-stars an impressive ensemble cast including Keith Michell (The Six Wives of Henry VIII), Betsy Blair (Marty) and Richard Attenborough (The League of Gentlemen), as well as showcasing premiere Jazz musicians of the fifties and sixties, including Johnny Scott, John Dankworth, Tubby Hayes and the legendary Charles Mingus." This Jazz adaptation of Othello also features a performance by Dave Brubeck, folks! Below: Hell Drivers poster and some images from All Night Long. Related posts: my photography series from Portmeirion, Rare Danger Man Comics, Pirate Radio, Agente Secreto Comics, John Drake Comics, Prisoner and Captain Scarlet, Brubeck Thorne Modern, Danger Man Comics 2. 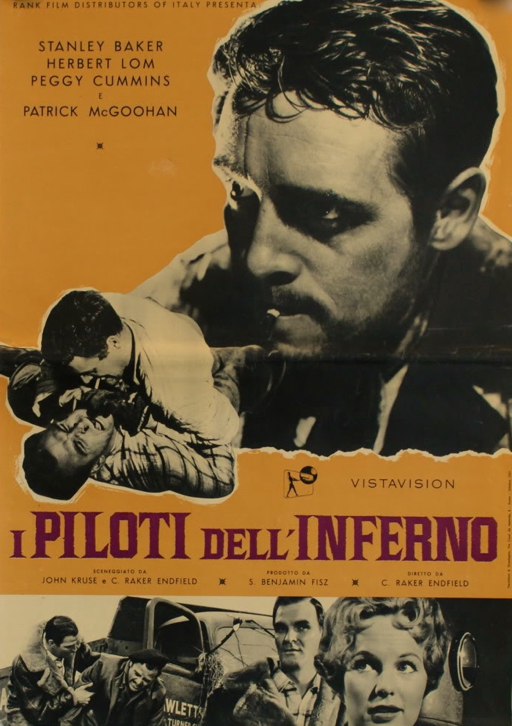 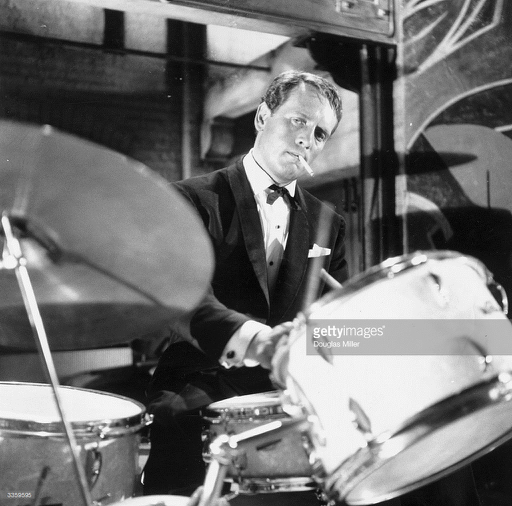 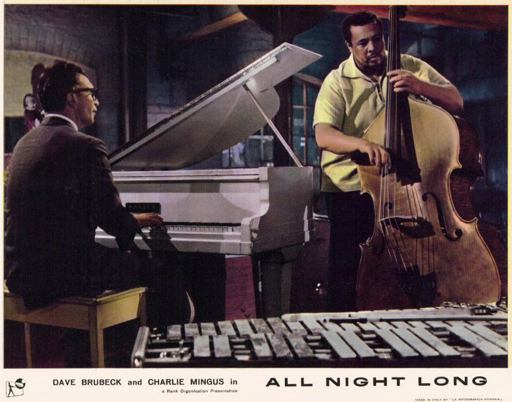 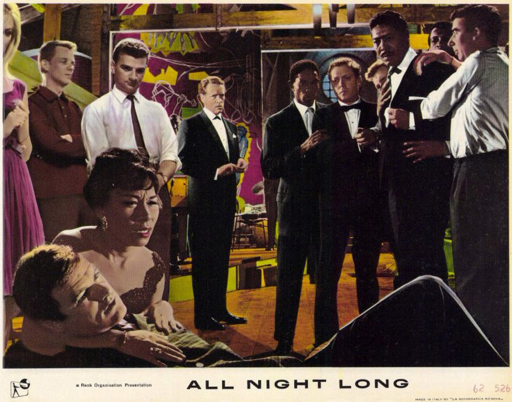 Spy Vibers with deep pockets may be interested in this super rare photograph that has come up for sale on eBay France. Taken by photographer Tazio Secchiaroli on the set of Elio Petri's The 10th Victim in 1965, this original print depicts Elsa Martinelli and the film's overall Mod and Op-Art design style. The back includes an agency stamp and inscription. 18x24cm. Viewers of Fellini's films will be familiar with Secchiroli's work- he even inspired the Paparazzo character portrayed by Marcello Mastroianni in La Dolce Vita (also inspiring the term 'paparazzi'). And now one of his photographs of The 10th Victim is available! Readers know this film looms large in my Spy Vibe universe. In fact, the Blu-ray edition features my collection as the image gallery. Thankfully I've been able to find pieces that fit my art teacher budget- until now. I hope this photograph finds a great home with a fellow fan. Enjoy! Need more Elsa and 1960s fashion and photography? See my last post, Elsa Martinelli Autodromo Roma. 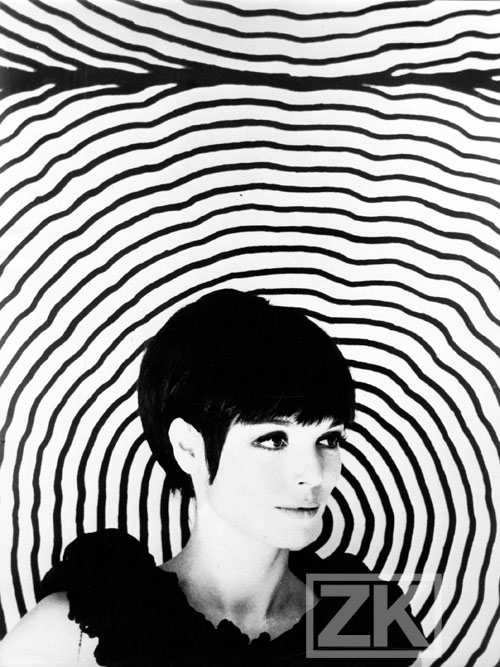 A few wonderful photographs of Elsa Martinelli crossed my radar while researching materials for an upcoming book project. As many Spy Vibers will know, Martinelli (b. Jan 30, 1935) starred in one of my favorite films, The 10th Victim (Elio Petri/1965), along with Ursula Andress (Dr. No, Casino Royale) and Marcello Mastroianni (La Dolce Vita, 8 1/2). She began her career as a model and actress in the early 1950s and saw great success by mid-decade with roles opposite Kirk Douglas (The Indian Fighter) and a Best Actress award at the Berlin Film Festival in 1956 for Donatella. She worked steadily between Europe and the US in the 1960s, playing roles in high-profile productions such as The Trial by Orson Welles, The V.I.P.s, Hatari!, and Candy. Spy Vibers may know her best from the films The 10th Victim and Maroc 7 (1967). Martinelli then stayed closer to home, appearing in European movies up through the 1990s. Here she is as a rally driver in 1966 on the set of How I Learned to Love Women by Luciano Salce (Yesterday, Today, Tomorrow, Anyone Can Play, City Under Siege) at the Autodromo Roma photographed by star shutterbug Angelo Frantoni. Start your engines with Elsa and make it a great week. Enjoy! 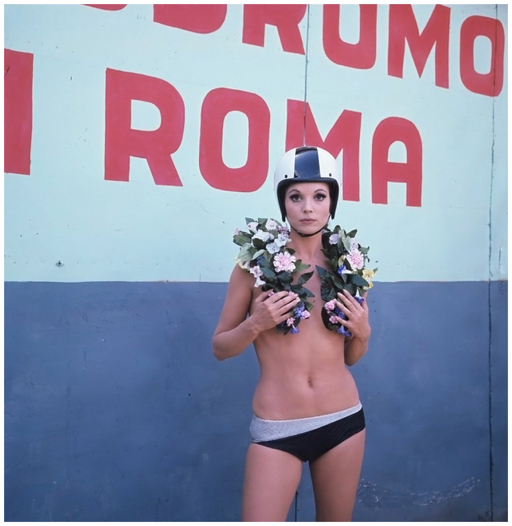 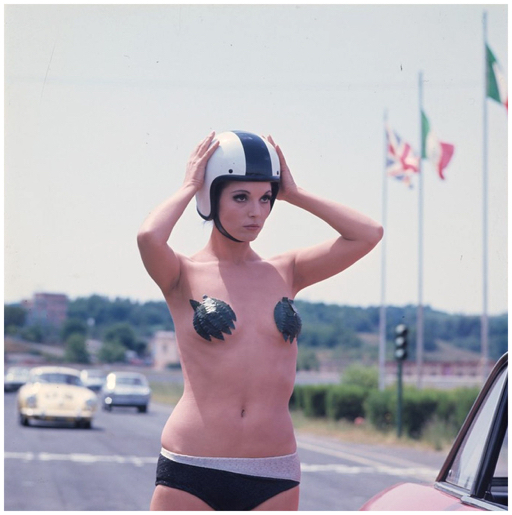 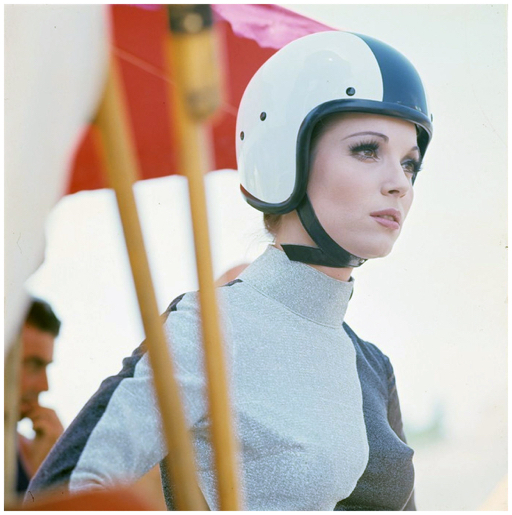 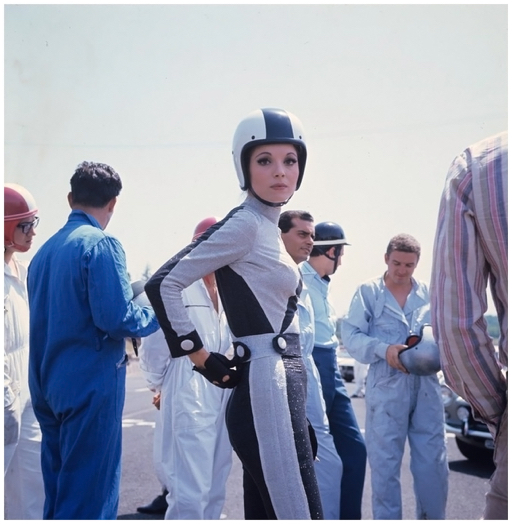 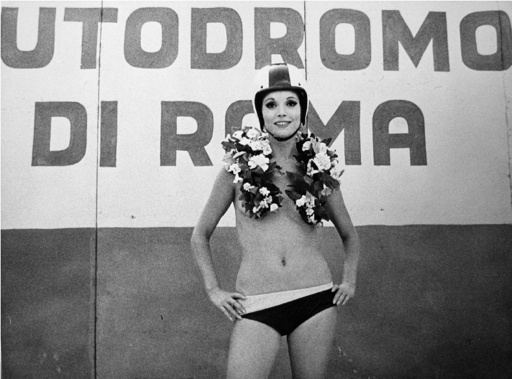 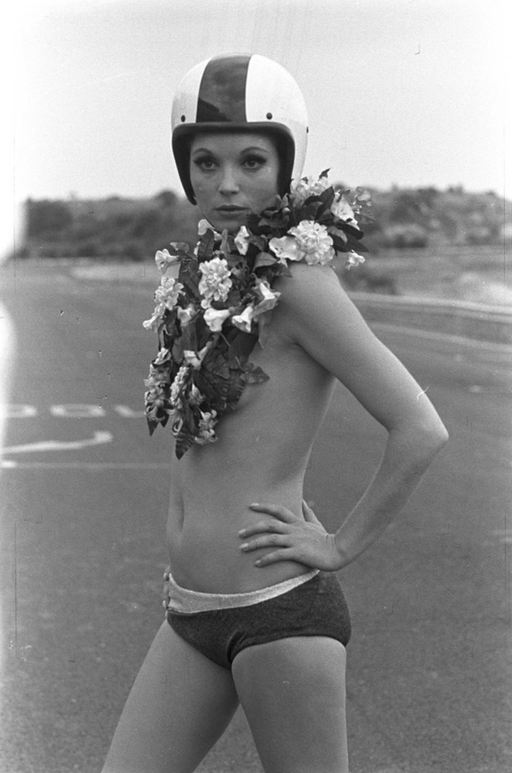 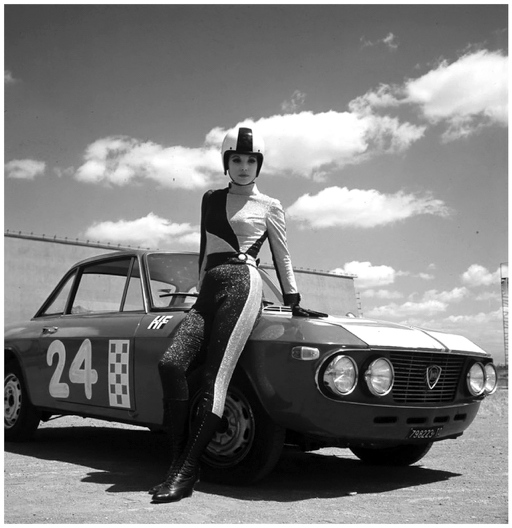 Another busy week here at the Spy Vibe lair. It was a mad dash to get all of my art students ready for their annual exhibit before everyone left for a week-long experiential learning course and spring break. I spent weeks planning a trip with students to visit major literary sites in the UK. We were going to sty with host families in Stratford Upon Avon and soak in some Shakespeare, followed by London exhibits to study old faves such as Sherlock Holmes, Alice, and Dickens. Amazingly I got sick the day before our departure and another teacher went in my place. So sad to miss the adventure and getting through a virus is no fun, but I've been passing the last few days with Poirot mysteries and getting reacquainted with some of the 1960s classics that really walk the line between spy/espionage, crime, and science fiction. One film that brought a smile to my face once again was Fantastic Argoman. This Italian production was released in 1967 and drew heavily from the costumed hero/anti-hero traditions in Europe, which included Superargo, The Three Fantastic Supermen, and Diabolik. Argoman is one of those rich playboy types with a butler and modernist lair, who has the reputation of the rogue/thief, but works (sort of) on the side of the law to thwart other criminals. It seems Argoman always demands payment for his services, so he comes across as quite the mercenary, enjoying his own private collection of rare art and antiquities (like the Mono Lisa!). Argoman also uses his superpowers of suggestion and telekinesis to get women (yikes!), though he loses his powers for six hours after "being" with them. Despite this kind of cringeworthy attitude from the period, the old thriller conventions in the film are playful and fun and, as you can see from these graphics, the sets and costumes were steeped in the visual language of science fiction and cliffhanger serials. The set designers literally elevated the notion that the character is above- above the law, above normal men, a fantasy, a carefree bachelor- by suspending all of his furniture on ropes (the results are pretty silly). You can also see psychedelic elements creeping in with organic patterns replacing the Op-influence so prevalent between 1965-1967. Argoman's costume is nothing to write home about, but the femme fatale does get to don a green hat that resembles Cardin's 1966 Space helmet design. Music by movie maestro Piero Umiliani and costumes by Gaia Romanini (Operation Kid Brother, Special Mission Lady Chaplin). Below: German Lobby cards and French poster. Spy Vibers can read a great review of the movie at our sister site, Double O Section. If you enjoy costumed crime/sci-fi characters from the 1960s, check out They Call Me Superseven, a fun homage to the period by stuntman/writer/director Robert Griffith (also on DVD). Enjoy! 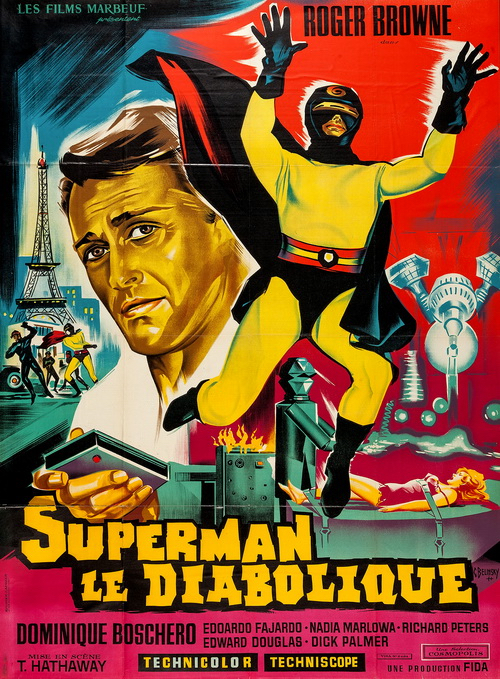 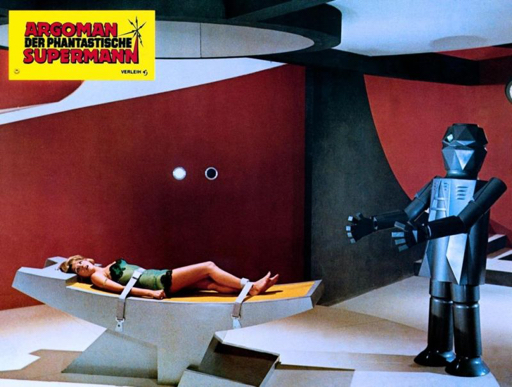 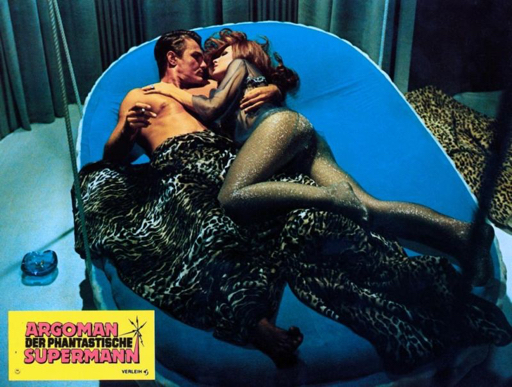 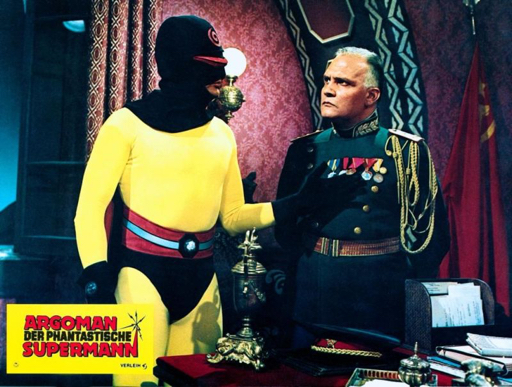 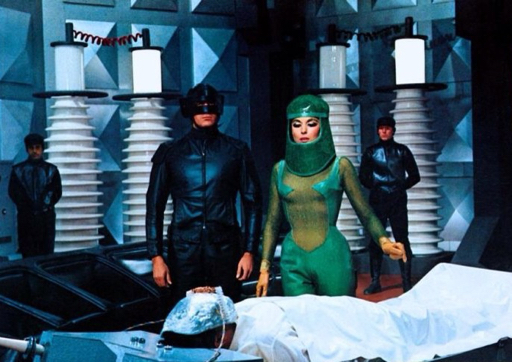 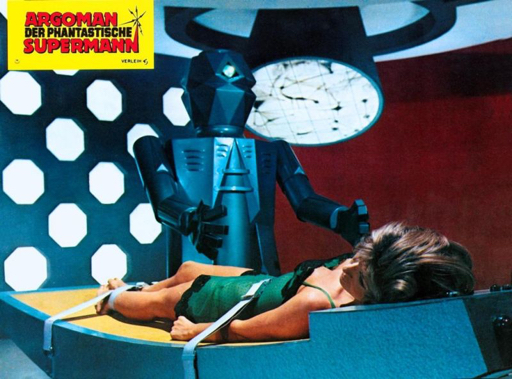 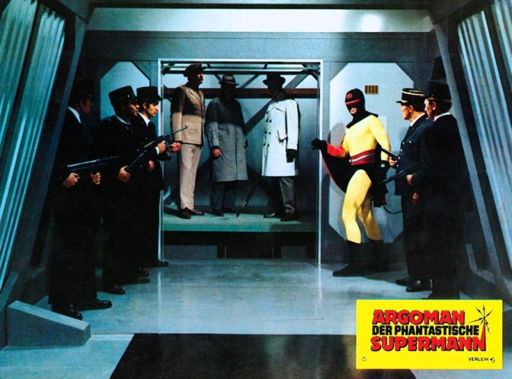 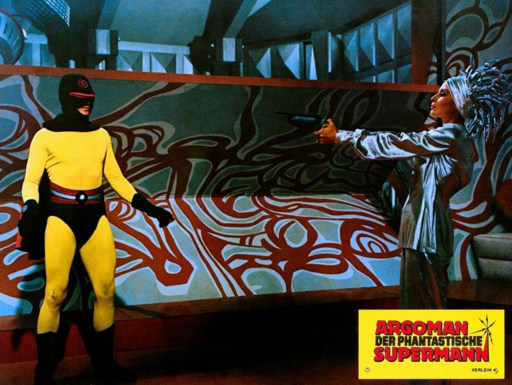 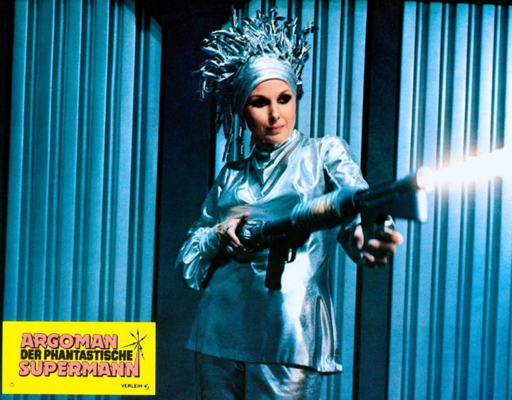 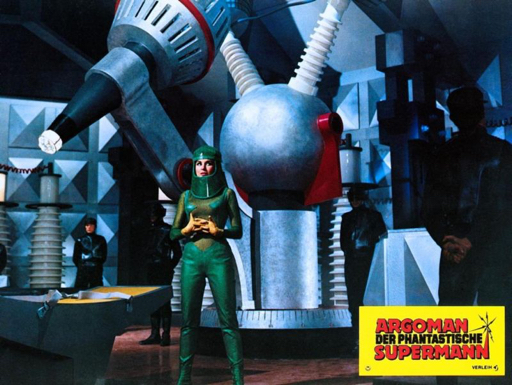