Greetings, Spy Vibers! I've been following a thread on a music forum for a while that focuses on Bondian music, and the thread-starter found something really interesting this week! In 1959, Mel Torme released an album called ¡Olé Tormé!: Mel Tormé Goes South of the Border with Billy May, which included a track called "Frenesi." The song had been a standard for quite a while by then, with recordings by popular entertainers such as Frank Sinatra (Tommy Dorsey years), Eydie Gorme, Glenn Miller, and Artie Shaw. But what made the Mel Torme version special? Well, in the last 20 seconds or so, the tune veered into unmistakable territory and seemed to predict the Bond theme! And only the Mel Torme arrangement had this musical phrasing. The album arrangement, as the title suggests, was by Billy May, whose credits also included Man With the Golden Arm, The Green Hornet, Naked City, Batman, and even A Fine Madness (with Sean Connery). I think it's very likely just a cool coincidence and certainly an added footnote in the already dense fabric of the 007 theme's origin. Monty Norman used phrases of notes in his 1961 musical, A House for Mr. Biswas, and John Barry contributed his own impeccable, driving arrangement and ideas, all of which culminated in the now-classic Bond theme. But what of ¡Olé Tormé! in 1959? Again, I have to think it was down to luck and coincidence. Although, it is fun to note that a number of the musicians who played on the album sessions for Billy May were also steeped in the Crime Jazz movement happening at the turn of the 1960s. Among the jazzmen credited were the likes of Pete Candoli (Peter Gunn, Johnny Staccato, Touch of Evil),  Conrad Gozzo (Peter Gunn, Touch of Evil), Larry Bunker (Peter Gunn, Ice Station Zebra, Bullitt, Charade), and many others. Check out the end in this video and see what you think. Photos below: Great cover of Billy May's 1960 album POW! (using comic graphics in a way that predicted Pop Art and Batman), Sinatra and Billy May take five during one of their projects together. Enjoy! 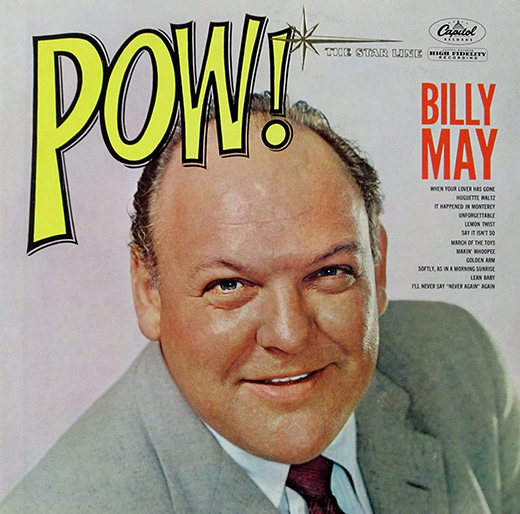 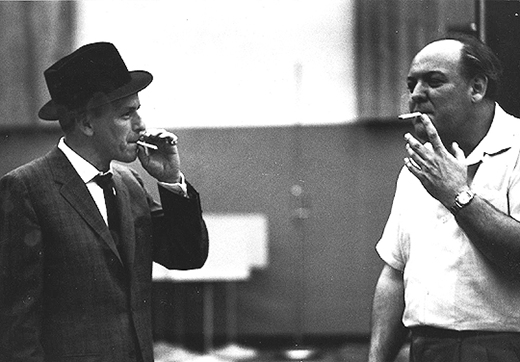 Gary Numan fans have been celebrating this week with the arrival of his new album, Intruder. Check out the title track on YouTube (and look for it at your favorite record shop). Gary's been making great stuff lately. Similar to his last album, Savage: Songs From a Broken World (2017), the new tracks channel his sci-fi narrative about the future planet itself, pushed well beyond its limits. Numan was a huge fan of some great classic TV shows and films growing up as a kid. When he was eight or nine, he and some friends on the street called themselves The Monkee Juniors and would mime to Monkees records at people's homes in order to raise pocket money for sweets. His mom even made him a "Mike" hat. So cute! And Monty Python and the Holy Grail was his nightly comfort viewing for a long time. Numan has also gone on record as a big fan of the classic TV shows by Gerry and Sylvia Anderson. Gary sat down for a great 40min chat in 2018 with Jamie Anderson to talk all about programs, gadgets, aesthetics, art, and much more! From the episode description: "Music legend, and the man behind hits like 'Cars' and 'Are Friends Electric?', Gary Numan joins us today. Gary's a huge fan of Gerry Anderson shows and credits them for some of his iconic looks and musical inspiration." It was so fun to hear Gary talk about his early recollections of Fireball XL5, TV21 comics, Stingray, Thunderbirds, Captain Scarlet, UFO, Space 1999, his fascination with all the cool vehicles (Thunderbird 2 got a shout-out!), collecting the Corgi toys, and dreaming as a little boy of becoming one of those pilot characters. Gary mentioned that, as a boy with Aspergers, he often felt more comfortable with machinery than he'd ever been with people, which fed his enthusiasm for all the mechanical designs in the shows. It's wonderful that his passion for machines would also blossom into many adventures as an actual pilot, flying stunts and even completing a flight around the world! Numan also talked about how endlessly fun it was to see sequences, like the Thunderbirds intro, over and over: "It's like listening to a band play your favorite song for the hundredth time; you still love it!" And he made a great quip about the length of some of the launch sequences: "I suppose, really, by the time it launched, the emergency was over!" Jamie Anderson said that Numan and his dad, Gerry Anderson, would have found a lot in common. As one might guess from the amount of detail in the shows, Gerry Anderson was quite fascinated with airplanes. But I didn't know that Anderson's brother had been an RAF pilot and was shot down during WWII. And Gerry Anderson himself had RAF experiences at the end of the war. Jamie's conversation with Gary Numan was fluid, fun, and often deep. As an artist, Numan revealed that the TV shows really fed him creatively as a young guy. When asked if Barry Gray's scores were an inspiration, Gary admitted that he has rarely looked to music for ideas during his career. Rather, his inspirations have been almost entirely from aesthetics, books, films, and daily observations. He described these as the "sparks" in life that generate truly personal work vs. emulating what one likes or making a pastiche- a theme he sometimes touches upon in interviews. If Spy Vibers haven't checked in with Gary Numan since the 1980s, I really recommend seeking out albums like Pure and Splinter, as well as the recent song When the World Comes Apart (expect an industrial vibe). And take a look at the excellent documentary Reinvention. The 2016 doc Android in La La Land (on Prime) also goes very deep and honest into his emotional life- it's definitely worth watching! But if you really want to see his growth in one powerful snapshot, check out this 2018 appearance on the Old Grey Whistle Test, where he sang with his daughter, Persia. Numan has grown better and better with age. His own journey in adulthood has included becoming a dad (he has three kids) and understanding life with Aspergers, which have all grounded him in a confidence he never had as a younger guy. It's inspirational to see! Also, check out this amazing performance of Are Friends Electric?, produced as part of the AllSaints Basement Sessions filmed in an old air-raid shelter in East London (it might be my music clip of the year!). Despite his early persona in the press, Gary Numan is a down-to-earth guy and a totally unique artist. And, in part, we have Gerry and Sylvia Anderson to thank for some of that spark-magic! "Spectrum is Green," indeed! Listen to the interview on the Gerry Anderson Podcast (starts at 34:00). Oh, and speaking of cool Corgi collections, here's one for the fans: Corgi Premiums actually produced a die-cast model of Gary Numan's futuristic Telekon Chair used in stage performances of "Down in the Park.". It was only available during his last tour and there are still some left on the website! You can order one (comes with a signed card!) at the official Gary Numan shop. Stay safe out there (... "safest of all- in cars"?). Below: beautiful sleeve designs for Gary Numan's 2015 residency at the London Forum, the Telekon-Era Corgi toy (official photo by my friend, David), and a whimsical Captain Scarlet-Numan mashup image posted by Gary when he first announced the Anderson podcast. Enjoy! 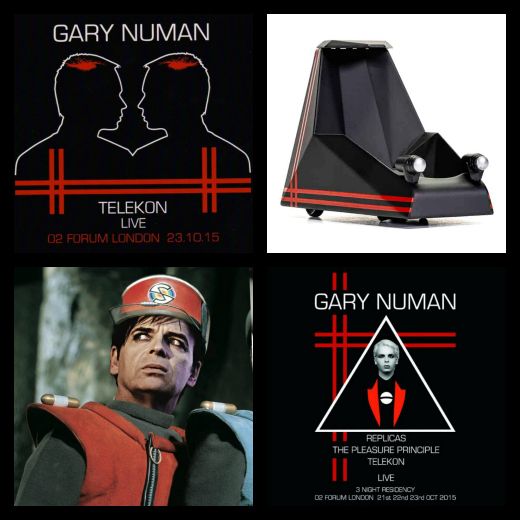