Event alert: I want to remind Spy Vibers about The Avengers 60th anniversary event happening online Friday January 29th. I'll repost the press release below. In addition, Comic cover artist extraordinaire Francesco Francavilla will be making available a cool print of Steed and Peel in a limited-edition of 250 (see image below). More info about his prints at Vice Press here. Also check out my recent post regarding the beautiful Avengers 60th art and prints by Needle Design. Lastly, James Bond fans can still order the Ian Fleming novels at .99ea on Amazon's kindle until the end of the month. Enjoy! 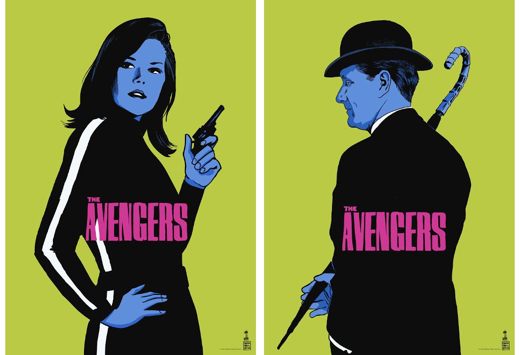 Event alert: there will be an online event celebrating the 60th anniversary of The Avengers on January 29th. Fans will be able to tune in at 8PM (UK) to see three episodes of the classic series, followed by a Q&A with special guests. From the press release: "In January 2021, STUDIOCANAL presents a very special event to celebrate the 60th Anniversary of the ground-breaking cult Sixties TV series THE AVENGERS, with an ourscreen online event, offering 5000 fans a unique chance to enjoy episodes of the show ‘together’, hosted by some very special guests, with Q&As, discussion of the series, and tributes to stars Diana Rigg and Honor Blackman. Fans will be able to interact using the ourscreen live chat bar, enjoying the social experience in real time, from the comfort of home. As John Steed might say, 'How absolutely splendid!' A cultural icon of British television history, The Avengers has remained a much-loved beacon of Britishness across the world since it first aired in 1961. Famous for its bowler hats, fanciful plotlines and the glamour and sass of Mr Steed’s companions, January the 7th 2021 marks 60 years since the first episode, Hot Snow aired across British TV screens, keeping viewers enthralled until 1969 after 161 episodes. This 60th celebratory evening is a tribute to one of the most endearing British TV creations of all time and even more pertinent following the recent losses of Diana Rigg and Honor Blackman, so let’s raise our bowler hats to the marvel (ahem) that is The Avengers! Join us for a very special event to mark the 60th anniversary of The Avengers. Enjoy watching 3 classic episodes with fans across the country and look out for some special guests in between!

We kick off with Tunnel of Fear, episode 20 from the first series, starring Ian Hendry, Patrick Macnee and Ingrid Hefner. It is one of the three known complete series 1 episodes to have survived, lost for 55 years the episode came to light in a private film collection in 2016. Harry Black, an escaped convict, bursts into Dr David Keel’s surgery wounded. He claims to have been framed for a crime that he did not commit – and begs the doctor not to hand him over to the police. Steed arrives and ascertains that Black has links to Southend-on-Sea which might well tie in with an investigation currently being undertaken by his department. They are aware that top government secrets are being leaked from a funfair in Southend, and Black’s story, if true, could possibly lead them to the source of the operation. Can Steed and Keel bring down the operation, prove Harry’s innocence and get out of Southend with their lives?

Next up is The Nutshell episode 4 from series 3 in tribute to the wonderful Honor Blackman. This episode was directed by Raymond Menmuir. Steed and Cathy investigate espionage by a pretty burglar in "The Nutshell", codename for a top-secret underground nuclear shelter. They are not telling each other everything, and somewhere a traitor lurks.

Then to finish the evening we pay tribute to the inimitable Diana Rigg with The Forget-Me-Knot, episode 1 of series 6 introducing Linda Thorson as Tara King. The episode was directed by James Hill and written by Brian Clemens. Agent Sean Mortimer arrives at Steed's flat with what appears to be a severe case of amnesia. Crucially, Mortimer does remember that there is a traitor in the organisation. Co-opting trainee agent 69, Tara King, Steed and Mrs Peel uncover a plot to infiltrate the organisation by means of a potentially devastating memory-wiping drug." 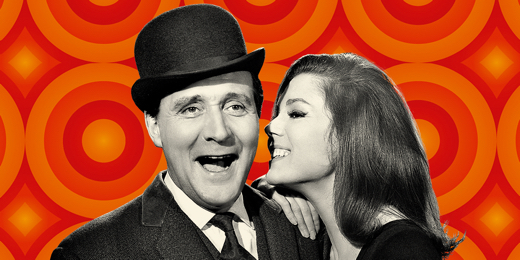