Happy 70th anniversary to comic strip, Beetle Bailey! It's actually a special week because cartoonist Mort Walker was born yesterday, in 1923! Mort is best known for comic strips Beetle Bailey and Hi & Lois, but in fact he was constantly creating new strips and projects he thought might benefit others (and maybe make a buck, too). He described himself to me as a “human inventing machine” and quipped “Seven days without laughter makes one weak.” Mort was a child prodigy who was endlessly enthusiastic about comics and jokes. He was selling work by 12, editorial designer at Hallmark by 18, humor mag editor in college, top magazine cartoonist by 27 -with Beetle syndicated that same year. 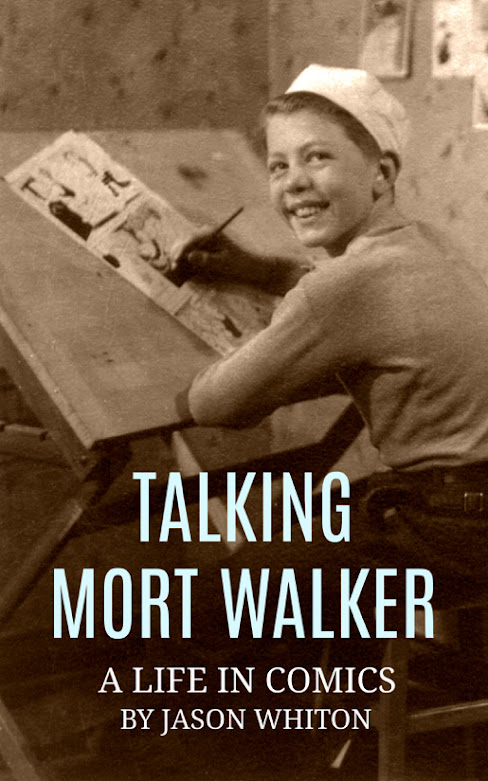 He loved the form and constantly fought to elevate comics, whether through battles over rights and contracts, leading the NCS, launching the comic US postage stamps, lending his talents to a variety of causes, or through his persistent dream to see a major comic museum thrive in the States. Mort was a great supporter of young cartoonists, sponsored new members in the NCS, and welcomed all into his life with a friendly, Huckleberry Hound voice (as Chance Browne once characterized it) and with a kind heart that seemed to say “the more the merrier.”

He sure loved the laughs, the wisecracks, but he could also listen when he needed to; his understanding and attitudes evolved. Trina Robbins told me this great story: “In about 1979 or 80, he came to the San Diego Comic Con and we women underground cartoonists all came to see his panel and challenge him. When I asked him about his in famous remark [about women not having a sense of humor], his reply showed how stereotyped his thinking was. He said (I’m paraphrasing) that he was surprised that there were so few women cartoonists because drawing comics was something you could do while the baby is sleeping or the laundry was getting done. We women walked out. But I’ll say this for him: he was good natured and open minded about it. Next time I saw him was at the SF Cartoon Art Museum, where I told him that I had considered pie-ing him, so that when he got mad I could tell him he had no sense of humor. My conversation with him opened his mind a little and he put on the first ever show of women cartoonists at his museum. And when he wrote to me announcing the show and asking my participation (remember letters?) he ended the letter by writing, ‘Next time we meet, I want the pie.’” 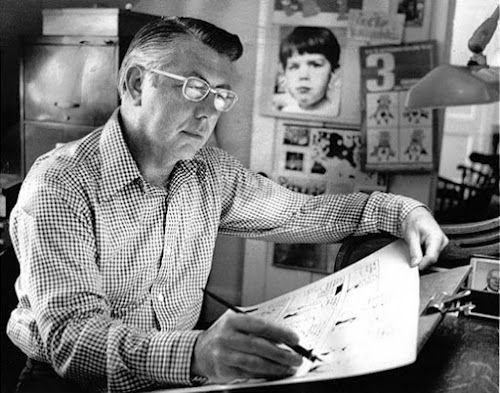 I began my book, Talking Mort Walker: A Life in Comics before he died in January 2018 and I was able to launch it in honor of his birthday that year. The book grew into a massive 700+ page anthology covering his entire career and it includes everything, from his first interviews to his memorial service, as well as articles, unpublished photos, college-era cartoons, and correspondences. After Mort’s passing, the cartoon community gathered in support and also contributed many tributes and memories, including Jim Davis, Patrick McDonnell, Jeannie Schulz, Lynn Johnston, Jenny Robb, R.C. Robert Harvey, Rick Marschall, Dave Astor, Cullen Murphy, Bill Griffith, Cathy Guisewite, Chance Browne, Guy Gilchristt, Jim Keefe, Rick Kirkman, Ray Billingsley, Mike Lynch, Jerry Scott, Mike Peters, Greg Evans, Blitz, Brian and Greg Walker, and many others.

Time marches on and I see my students discover the creative works of their own time (some of them now are even publishing in The New Yorker!). But I hope the cartooning community will always save a special place for that enthusiastic kid named Mort, who perpetually nurtured his first great love- the funnies. Happy Birthday, Mort! We miss you. Below: celebrating a couple of fun 1960s topical stories from Beetle Bailey.

Mort's character, Sarge, had an on-going series of gags that featured various fantasy and pop-culture inspired dreams caused by his culinary indulgences. One of the key moments for Spy Vibers was this fun August 1966 homage to James Bond and Thunderball. 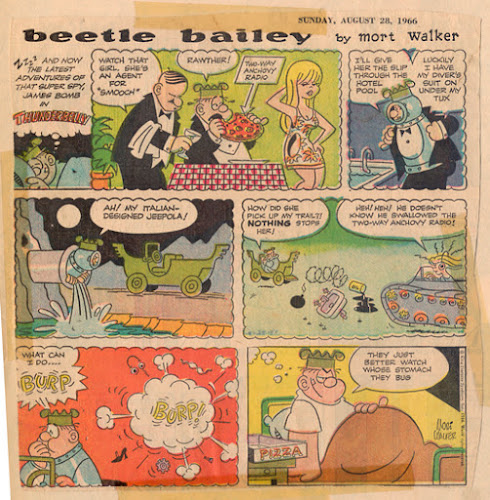 Beetle Bailey #38 appeared on the newsstands one year after the construction of the Berlin Wall. The issue featured a memorable cover design that depicted Beetle roasting marshmallows over a campfire and the bold title, Beetle Bailey in West Berlin by Mort Walker. Released in 1962, the same year as Deighton's The Ipcress File and the first 007 film, Dr No, the lead story in the comic addressed themes that would become popularized later with Le Carre's The Spy Who Came in From the Cold (1963), Deighton's Funeral in Berlin (1964), and Trevor's The Quiller Memorandum (1965). 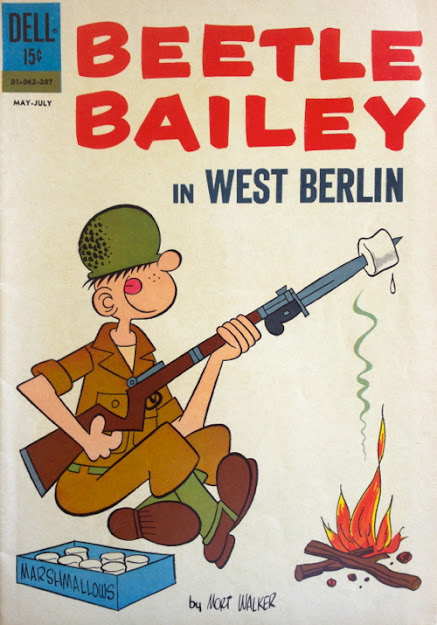 Summary: The 8-page story begins with a simple delivery to General Halftrack. As Beetle makes his way through the compound with a box of food, Colonel Grimshaw shows the General a photograph of top Russian spy, Boris Popoffsky. Of course, the enemy agent is a dead ringer for Beetle and our poor hero is quickly arrested and threatened with the firing squad! Luckily the real Russian agent is captured on a jet bound for Germany, and interrogators go to work on him off-screen to get useful information about his operation. With Beetle's identity cleared, the government boys realize they can now use him to trap Popoffsky's network. Beetle finds himself on a mission to Berlin! 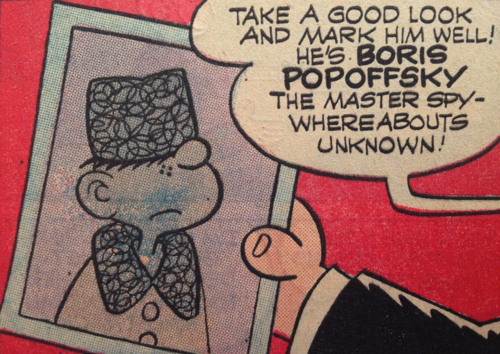 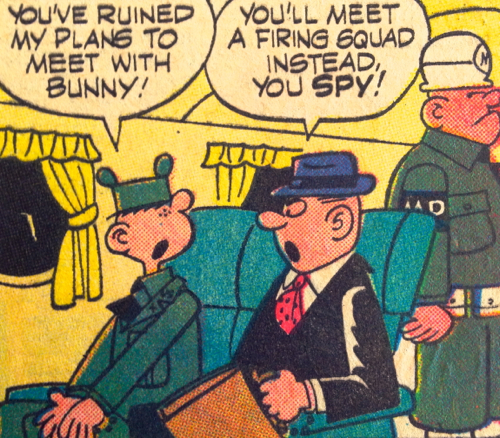 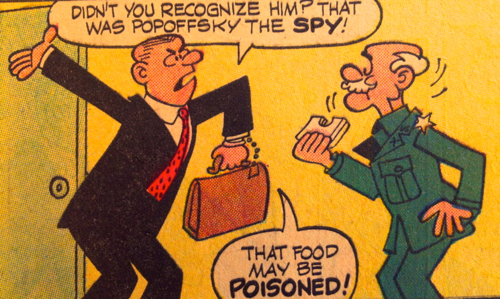 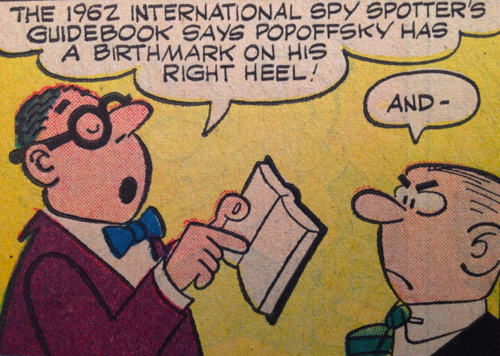 Beetle's contact man leads him to a secret rendezvous, where the enemy is hiding in a tunnel under the wall. Agent Beetle doses them with tear gas and helps the Secret Service and Military Police capture the spy ring. The story includes some elements that function well as a time capsule, like US agents in black suits and hats, spies in trench coats, Beetle's disguise as a European sailor-type, and early commentary on the quality of life at the Wall. As Beetle looks at an East Berlin checkpoint, sporting the slogan of the so-called "Workers' Paradise" and teeming with barbed wire, water hoses, and a tank, he declares, "It's a mighty grim-looking paradise!" He seems to capture the popular response that many had at the time, suggesting that East Germany couldn't have been such an ideological utopia if its citizens were desperate to escape. 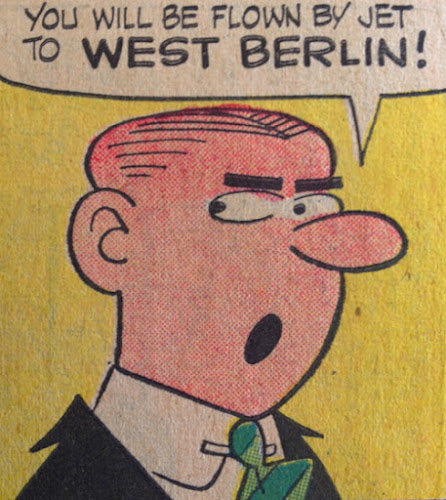 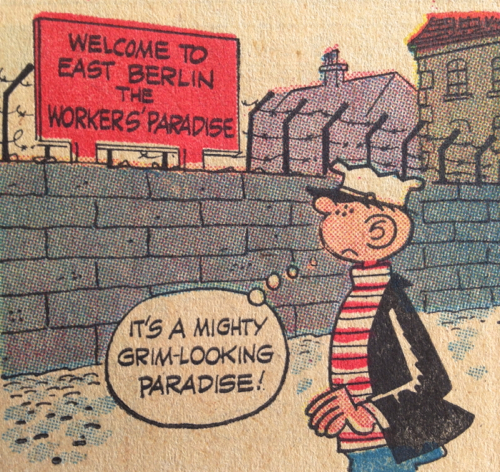 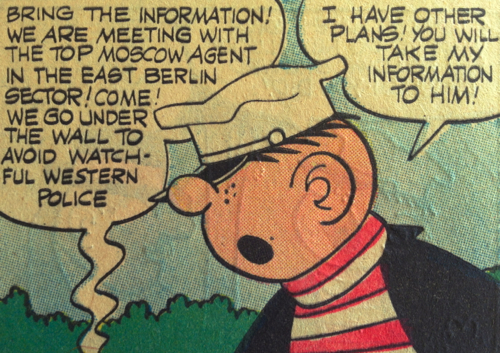 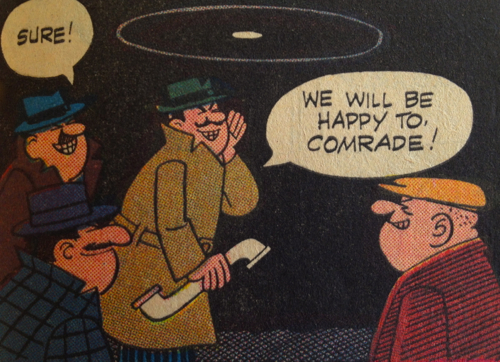 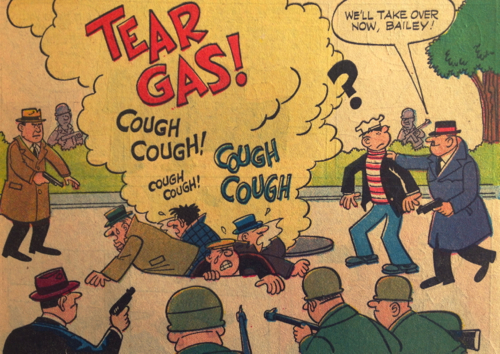 Spy Vibers can find my book, Talking Mort Walker, at all Amazon sites. Here are links to Amazon US, Amazon UK, and Amazon Australia. Enjoy! Below: Mort in his studio. No matter what age we found him, he was always that enthusiastic kid at the drawing table following his bliss. 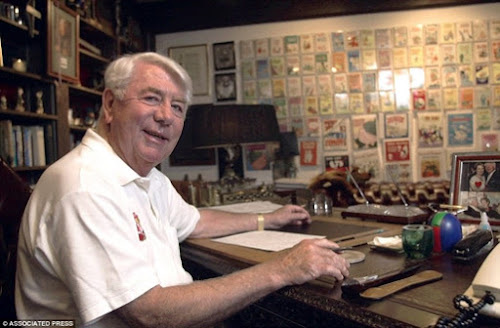