Diabolik Interview: Patrick Pezzati. With all the excitement around the upcoming Blu-ray release of Danger Diabolik in May, Spy Vibe has been celebrating the Diabolik universe with a series of posts about the music, set designs, action figures, and even the Diabolik theme park ride! My old friend, Patrick Pezzati, also joined me in the Spy Vibe lair recently for a brief chat about what it was like to grow up reading the Diabolik comics. Patrick lived in Italy between pre-school and college and spent those formative years exposed to both Italian and American culture and read counter-culture titles like Diabolik and the secret agent satire comic, Alan Ford. He founded the awesome chain of New England record shops, Turn it Up, in 1995 -my weekly haunt for fifteen years until I left for sunnier climes. Welcome, Patrick!

How did you first get introduced to Diabolik? What were your earliest impressions?
It was so early that I don’t really remember, but it was always one of the most popular comics in Italy where I grew up. The first things that were attractive were the cleverness of the disguises and tricks he and Eva used, and the cool gadgets they had. Above all, the fact that the bad guy always won was unusual and very cool to us rebellious teenagers.
You collected the comics when you were growing up?
Yes, I had hundreds of issues at one time and bought new issues as they came out. [below: Patrick's current stash]. 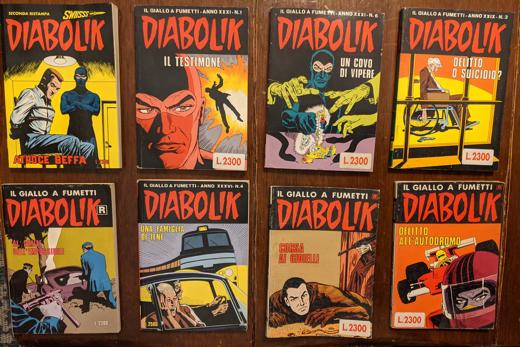 How were the comics distributed? Were they monthly? Could you subscribe, or did you have to find them locally at news agents and bookshops?
You could subscribe, but I don’t remember ever doing so because there were newsstands and “cartolerie” (paper supply shops) everywhere that sold the monthly issues (as well as the reissues that came out regularly).
So, one could look for old issues, as well?
Yes, you could send away for older issues and I did that a few times; there were shops that sold older original comics, and they often had reissue series you could buy. 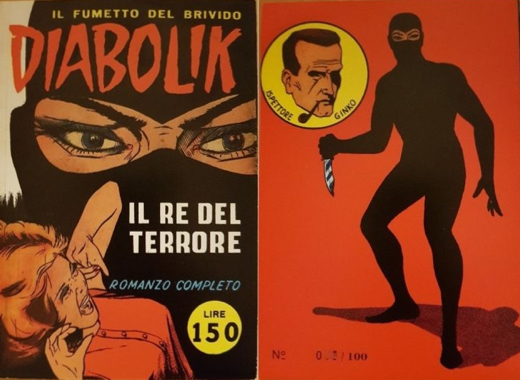 So cool! The comics have typically been difficult to find in the States, so I’m sure some readers are wishing they could go back in time and tap into that market. Did you have friends who were into Diabolik, too, or was this something you explored on your own?
Almost all my “rebel” friends loved Diabolik.
Apparently, the tone of Diabolik evolved over the length of the series, from ruthless criminal to an anti-hero with Robin Hood qualities. What did you note over the course of your reading the character?
At first it was all about the gadgets and disguises, as I mentioned above. As I got older and as the series evolved, the interaction and mutual respect between Diabolik and Ginko grew and became much more significant. Hard to say how much was the change in the characters and how much was my own increased observational abilities and interest in the characters themselves, though. 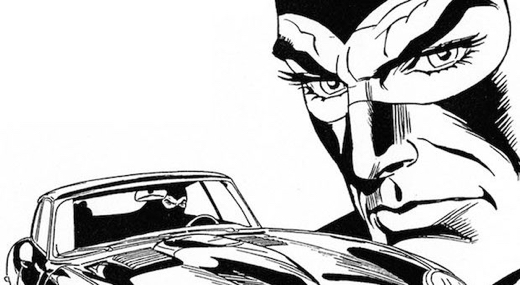 As a reader of the comic, what did you think of Mario Bava’s screen adaptation?
I have to admit that I’ve only seen snippets of it, so I can’t really say. Got to put it on the list, though!
You are in for a real treat! Did you collect other Diabolik items?
We may have picked up a few gadgets here and there but nothing we specifically collected. I had a model car once when I was about 12 that replicated some of the trickery in the comics.
Fun! That sounds like a similar thing to the Corgi car series. Back to the theme of rebellion: one theory about why anti-heroes have been more prevalent in Italy, France, and Germany especially is because those cultures dealt more with aspects of anarchy, defeat and rebuilding, and questioning of authority. Does that theory resonate at all with you?
Absolutely! Gangster movies were always popular, but even in terms of real life that was the case. In post-fascist Italy all the documentaries we watched in school focused on the “resistance”, so the anti-heroes were always celebrated in every aspect of life. We also had an influx of artists and musicians from Chile after Pinochet so we were keenly aware of “fighting the power”.
That makes a lot of sense, and it’s so interesting how heroes reflect their different cultures. Looking back, what were some of your favorite elements (or stories) you saw in the Diabolik universe?
As I mentioned above, the disguises and the gadgets were the first thing that drew me in. The exotic fictional locales added to the allure, too. Overall, the way Diabolik evaded certain defeat and/or death every time was what brought me back again and again. In a way, the fact that he was an outlaw made him the ultimate underdog.
That’s a great overview of the series and I think it will help new readers/viewers who might pick up the new Blu-ray. Thank you!
Thanks, this was fun!
Thank you for stopping by! Related Spy Vibe posts: Diabolik Figures, Diabolik Sounds, Diabolik Set Design, Diabolik Park Ride, Danger Diabolik Blu. Spy Vibers might also enjoy my Diabolikal board on Pinterest. Enjoy! 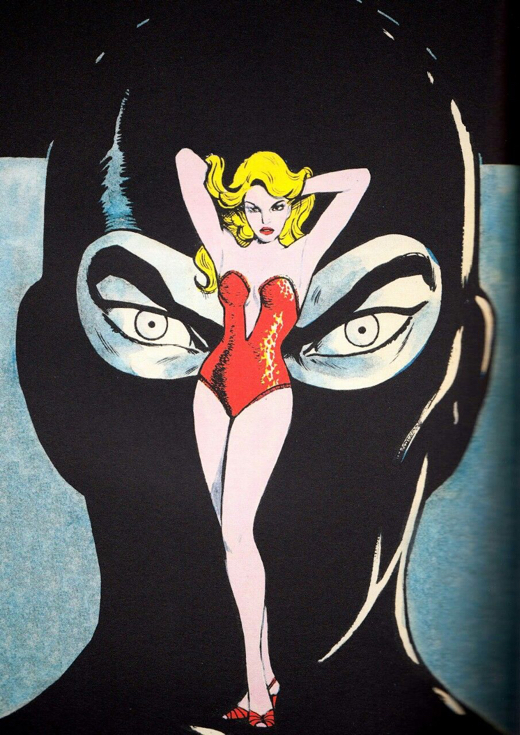