New release: Chris Barber: A Trailblazer's Legacy. A 4CD set is coming this July from UK distributer, The Last Music Co, which pays tribute Trad Jazz pioneer, Chris Barber! From the press release: "Fully authorized by Chris Barber and running at approximately five hours playing time, this set of four CDs and book set is testament to Chris’ remarkable career. It includes eighteen-thousand-words of discography and biography by Alyn Shipton and an insider’s view of Barber’s motor racing career by Dave Brodie. The music spans the seven decades from his first studio recordings in 1951 to a final session in 2018, made just four months before his 89th birthday. It includes collaborations with many other internationally renowned musicians. Leading a jazz band for over seventy years would be a remarkable achievement in itself, but also to have been at the forefront of the blues revival in Britain, and to have first brought such pioneer musicians as Sister Rosetta Tharpe, Sonny Terry and Brownie McGhee, Muddy Waters, Louis Jordan and Professor Alex Bradford and many more to the UK is equally significant. The book section is fully illustrated with one hundred and fifty photographs and images from Chris Barber’s private collection and elsewhere and is a fitting tribute to his extraordinary life." Below: my grid celebrating two of Barber's passions: music and racing; cover for the upcoming set, A Trailblazer's Legacy. 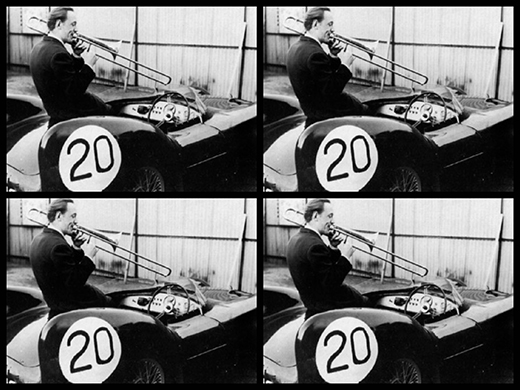 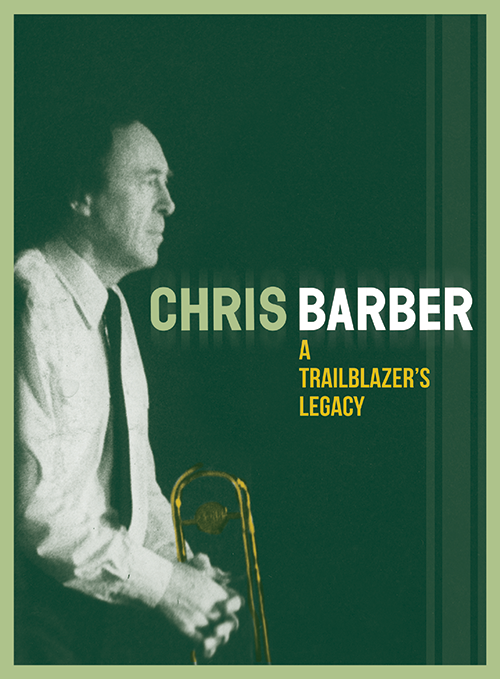 Just imagine a time between the early 1950s and the beat boom, when Trad Jazz was the ruckus, rowdy, and irresistible sound that drew kids to the clubs and dance halls of Britain. In films from that era, such as The Hypnotist (Scotland Yard Dragnet, 1957) and Mama Don't Allow (1956), and in Soho-based crime stories like Fleetway's John Steel detective comics, the jazz scene was not only exciting, it was subversive! And even for a period into the early 1960s, Trad competed alongside early Rock 'n roll for that ultimate vote of youthful devotion: parental disapproval! Behind the scenes, this was a really community of dedicated musicians who were major fans of the original New Orleans jazz and blues artists; so much so that they dedicated their lives to preserving and spreading the form. One of the main band leaders was Chris Barber. Barber also enjoyed the longest career, touring right up until his recent decline with dementia and passing on March 2, 2021 at the age of 90. He was also one of my great heroes. As part of his life's mission, Barber also brought American artists like Muddy Waters, Sonny and Brownie, and Rosetta Tharpe over to the UK to champion blues and gospel music, and in so doing, ignited the British Blues boom for kids like Eric Clapton, Alexis Korner, Tom Jones, and John Mayal. 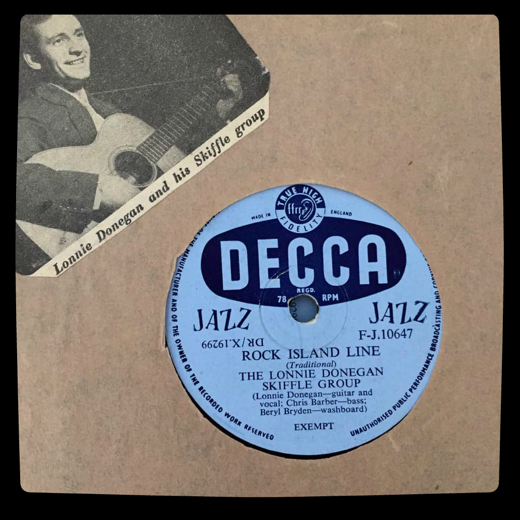 Before that, of course, he was at the center of another important music revolution. A central figure in the Barber band in the early-mid 1950s was Lonnie Donegan, a talented singer, guitarist and banjo player. In the intervals at their shows, Barber and Donegan devoted time to American roots music. Dubbed "Skiffle", Donegan's powerful voice would belt out tunes by Leadbelly and others. While recording an album at Decca in July, 1954, Lonnie recorded Rock Island Line (One of my copies of the old 78 record above, with original owner's sleeve collage). The tune was not only a hit- the first gold-certified record in the UK- it also launched a major cultural phenomenon (and many future legends)! As Billy Bragg pointed out in his recent book about the era, Skiffle empowered a new youth generation that suddenly found themselves free of rationing, earning pocket money, and ready to express their identities through a DIY sensibility. And there was a new symbol of independence- the guitar! Sales of acoustic guitars went from about 5,000 per year to 250,000 per year. Among those kids playing Skiffle were the likes of Van Morrison, Paul McCartney, John Lennon, Ringo Starr, George Harrison, Jimmy Page, and the list goes on and on. Both Paul and George would remember fondly seeing Lonnie perform in Liverpool when they were kids. I recently visited The British Music Experience in Liverpool where I got to see many artifacts from this era. The most impressive breadcrumb was John Lennon's personal copy of Donegan's Rock Island Line 78 record. Lennon had sold it to Rod Davis, one of his fellow Quarrymen skiffle group members back in the day. And there it was! The stuff of legends; the record that launched John Lennon and eventually dominoed into thousands of other bands. The evolution of 1960s pop culture would have been dramatically different without these roots in Trad Jazz and Skiffle. I wrote about the Liverpool exhibit for Chris Barber's website back in 2017. 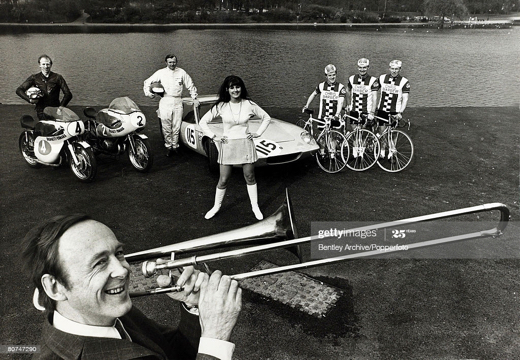 Chris Barber, whose long career bridging New Orleans-style jazz with Skiffle, blues, gospel, and early Rock, made him a kind of "George Bailey" in the culture. For those who never saw It's a Wonderful Life (it's an amazing film!), George Bailey was a character played by James Stewart, who learned that his own good efforts in the community played a crucial role in building the social fabric. Well, Barber was making a ruckus and wonderful noise ever since he and clarinetist Monty Sunshine started a band in 1953, and his projects bridged the worlds of jazz, skiffle, blues, and rock. He also helped to make a tremendous roar in the world of racing as an enthusiast and owner of the first Lotus Elite! Spy Vibers might appreciate the aesthetics. After Lotus created a number of prototypes, they launched the Elite Series I, chassis 1009 in 1958. The car was exhibited at the Earls Court Motor Show and purchased by Chris Barber. From Performance Car: "Barber raced the Elite extensively for five seasons in top level international sportscar racing, in both the UK and Europe. As well as competing in three consecutive Tourist Trophy races at Goodwood in 1961, 1962 and winning its class in 1963 with Mike Beckwith, the Elite raced at The Nürburgring and in the British Empire Trophy. During this period it was also driven regularly by Sir John Whitmore, the ‘Racing Baronet’, who famously broke the class lap record at Spa with ‘CB 23’ while on his way to class victory in the Grand Prix GT Support Race of 1962. Other notable drivers who drove the car include Bob Olthoff." Barber's Lotus was then kept off the road for about thirty years until it went through a restoration in 2016, and then sold at auction (for £121,500). It recently went under the hammer again with Silver Stone Auctions. Barber also sponsored a cycling team in the 1960s and I've seen a "Sun Chris Barber 10" model bicycle appear in cycling forums. Between the constant touring and racing, I think Barber must have loved being in motion. With that in mind, I imagine his rapid health decline and forced retirement must have been challenging for him. 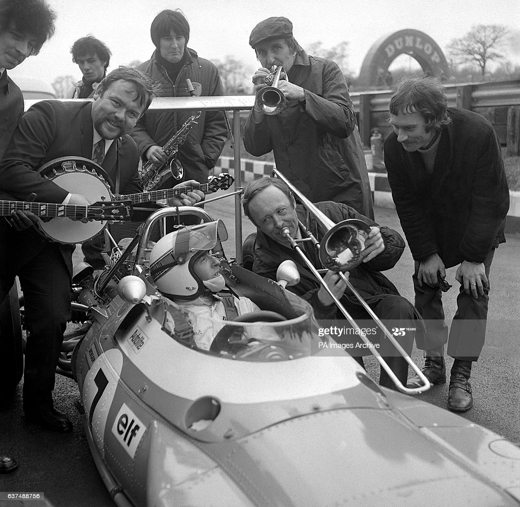 The new CD and book set promises to be a great celebration of Chris Barber's legacy and I'm happy to see it will include a discography (I only have a privately published one), as well as material covering his racing life. Pre-orders can be made through Amazon. For fans wanting to explore even further, I recommend the extensive CD catalogs at Lake Records and Upbeat Jazz (I'm especially fond of Chris Barber at the BBC: Wireless Days 1961-1962). Also check out Barber's album, Battersea Rain Dance from 1969 (included Paul McCartney), his live CDs with Rosetta Tharpe and Sonny and Brownie (my fave!), and the short film Mamma Don't Allow by Tony Richardson and Karel Reisz from 1956 (on Youtube: part 1, part 2). For a fun musical celebration of Skiffle, check out The Skiffle Sessions: Live From Belfast (2000), which saw a fantastic reunion and collaboration from 1998 between Barber, Donegan, Dr. John, and Van Morrison. Chris Barber wrote an autobiography (with Alyn Shipton) in 2014 called Jazz Me Blues. I recommended Trad fans see two fave movies of mine from 1962: It's Trad Dad (an all-star musical directed by Richard Lester!) and Band of Thieves (a Trad caper/comedy with Acker Bilk's Paramount Jazz Band). More info about Barber's career and the Big Chris Barber Band at the Chris Barber Website. Enjoy! 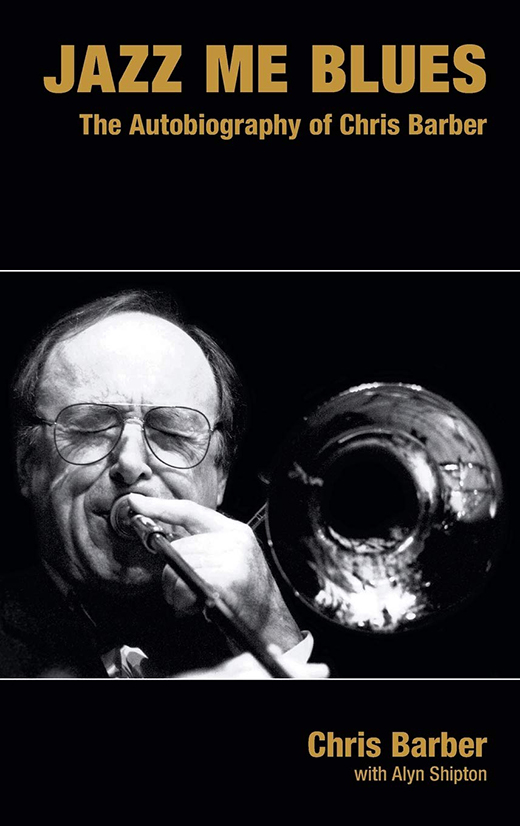