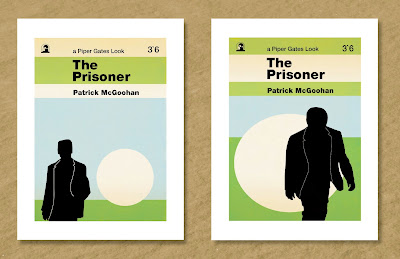 When you are interested in retro design and pop culture, as we all are here in the Spy Vibe community, you quickly discover a network of interesting websites and like-minded pilgrims devoted to well-dressed adventure. Names of the major designers soon become familiar and you trade iconic images back and forth between blogs. It is an unusual and exciting event, then, when a new gem appears on your radar. This was my experience, when I recently was searching for images of Delia Derbyshire, music pioneer from the BBC Radiophonic Workshop and composer of the electronic Doctor Who theme. She is an artistic character from the "Spy Vibe" era that is worth checking out. In fact, a documentary film was just made about her. My internet search was bringing up the same few images of Delia, until I came upon what looked like a classic paperback book cover. There she was, Delia, and more stylish and retro than anything else I had uncovered. A few clicks later and I found myself falling down the rabbit hole of an innovative designer who has mined the world of Barbarella, Gerry Anderson, ITC spy shows, vintage book designs, and hip musicians from the 1960s. Under the guise of Piper Gates Design, artist Ian Percival is a new missing link and instant hero on Spy Vibe. I sat down with him last night for a virtual chat about his work. 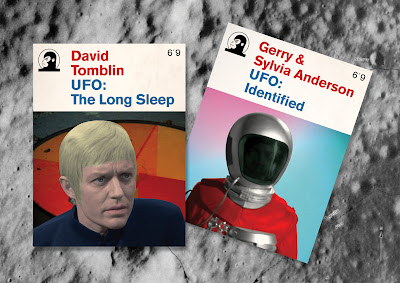 Your images seem to come together in series based on cohesive design ideas. What are some of the main inspirations you drew from to create these series? Were there designers that you looked at specifically?

Very nice of you to say that. It’s a pretty endless list but here goes: obviously the design of Penguin & Pelican Books from the 1960s and 70s are a huge influence on the work I’ve done. I also love DC and Marvel Comics from the 1970s as well. Neville Brody’s design for Up-Tight The Velvet Underground Story was a huge influence when I was younger. I use to spend hours just taking in the design of that book. Quentin Fiore’s design for The Medium is the Massage is truly inspirational as is the advertising  of Geigy. I’d also cite Peter Blake, pulp TV/ film tie in books, the back cover of Pet Sounds, the front cover of Dying For It by The Vaselines, Look-in magazine and film souvenir programmes from the 1970s particularly Jaws and Close Encounters of the Third Kind. 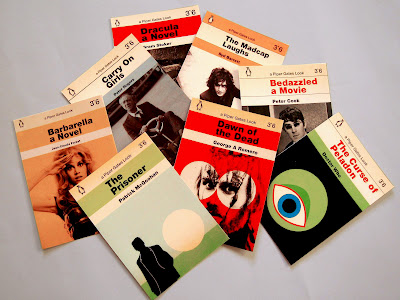 You have a wonderful collection based on some of our favorite retro icons like The Prisoner, UFO, The Persuaders, Bedazzled, Barbarella, and others. Which properties were the most successful to adapt so far? Tell us a little about the process you go through to choose imagery and design concepts?

From a commercial viewpoint it would be the Joy Division Colouring Book and the Quadrophenia poster as they sold out very quickly. From an artistic viewpoint my favourite was probably the UFO Postcard Set as UFO has always been one of my favourites since I can remember. Apart from the Dinky Toys and some sweet cigarette cards there was no merchandise; so basically I designed something that I would have liked to have bought. I thought conceiving them as lost novels combined with making them appear as if they were printed in 1969 would be an interesting concept to follow. 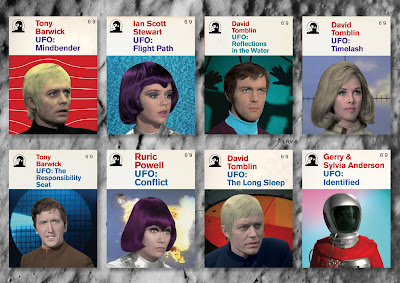 Are there retro icons you plan to work with in the future?

I’d love to do a Kraftwerk colouring book one day. It would be the era from Ralph & Florian to Computer World.

I'm with there, brother! I'd love to see a Kraftwerk book. In fact, I recently printed my own history of Kraftwerk design book on Blurb! Have you tried some 1960s characters that didn't adapt well to new designs?

No, not really. I find that if you have the right idea together with the correct illustration or image, plus some wonderful typography, you can’t go wrong. Having said that Bodie from The Professionals was a bugger to illustrate. 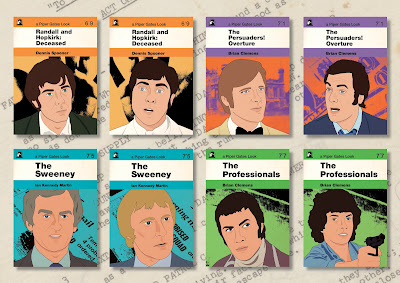 You have a really cool book design devoted to BBC Radiophonic Workshop composer Delia Derbyshire (Doctor Who theme), as well as a few Doctor Who-related images. Have you thought about a making sets of Radiophonic composers and all of the Doctors?

Delia was part of  a collection called “Geniuses in Sound” that also featured Joe Meek, Brian Wilson and Martin Hannett and was influenced by Raymond Hawkey. I’d certainly be up for doing the whole of the Radiophonic Workshop but its appeal might be somewhat limited. Doctor Who is one of my favourite programmes ever, so I wouldn’t rule that out, though the Target book covers from the 1970s are very hard to beat. I’ve also always loved the Tom Baker Doctor Who Weetabix cards from the 1970s which I use to carry round with me (for what seemed like years) when I was a kid. 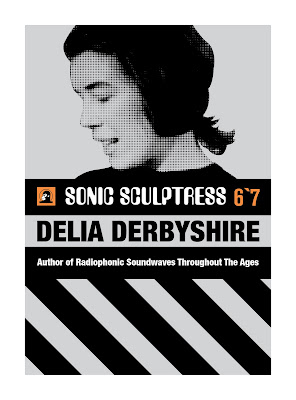 I've seen some of your posters on eBay. Are there other ways for fans to locate and order your cards and posters?

Not at the moment but hopefully there will be a Piper Gates Design website where you can buy lots of lovely items from in the none to distant future. Anyone is free to email me or contact me on twitter with any questions they might have. 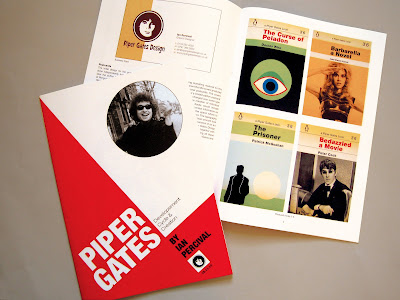 How did you get started in design? Did you study in art school?

I’ve been thinking about this a lot recently. I think it stems from making covers for bootleg tapes when I was about 14 years old, its what started my interest in the placement of imagery and typography. Looking back, I was pleased to discover that I used a lot of Helvetica Letraset on them. Then when I was in a band after that, I use to design all the posters, so I suppose my interest in design has always been there. 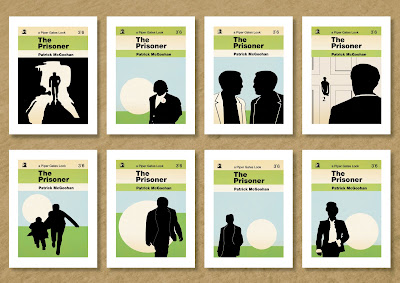 To answer the second part of your question I did a foundation degree in Graphics and eMedia which was followed by a BA in Graphic Design. I hoped going to art school would make me become the next Syd Barrett or Pete Townshend but I ended up becoming a geek with a love of fonts! 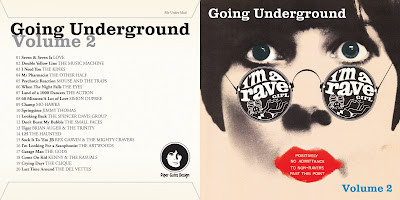 Have you been able to do commercial work for publishers or other print services? I think I saw you had something in Shindig! Are there companies that you would love to work with?

I’ll happily work for anyone just as long as it’s an interesting project and the client is aware of my style. I get a lot of emails from people asking me to design for them but they haven’t got any money to pay me. I often wonder if they try this sort of tactic out in Tesco’s when they’re doing the weekly shop and if they do whether it works. 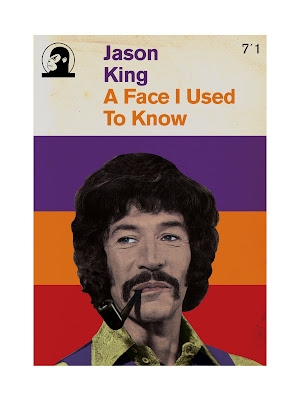 Thanks again to Ian for sharing his passion and projects with us. You can find more of Ian's Piper Gates Design images on his website. You can also find limited-edition cards and posters on eBay by searching for the seller, le_big_e.
Posted by Jason Whiton at 5:31 PM