If there is a cultural axis to the earth, then it certainly shifted 60 years ago today on October 5th, 1962. That's the day two of our major touchstones made their first mainstream releases: Bond and The Beatles! One can't overstate the impact both 007 and The Fabs had on culture around the world. And amazingly, the first big-screen 007 movie and the first Beatles single came out on the same day. What followed was the great Spy Boom, a complete re-invention of popular music, the galvanizing of youth, and a British invasion of style and design that continues to reverberate today in every Mini Cooper, well-dressed action hero, and new concept album. Bond and The Beatles spawned generations of imitators and each "brand" continues to produce new projects that expand the fan-base. Their iconography represents so many chapters in the changing climate of the 1960s, yet these monumental creations first arrived in such simple packages. 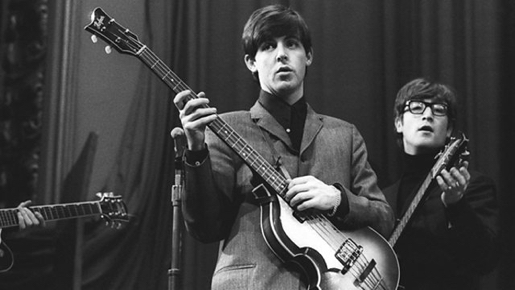 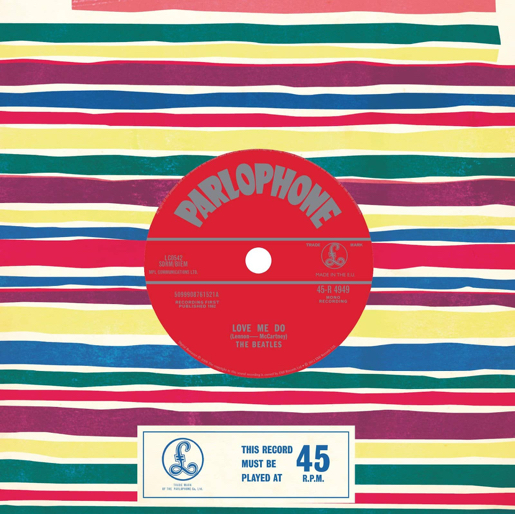 The Beatles first single, Love Me Do/P.S. I Love You, was released on October 5th, 1962. It arrived in a Parlophone striped paper sleeve and a simple silver-on-red company label. Talking about the song before he passed away, John Lennon said, "Love Me Do is Paul's song. He wrote it when he was a teenager. Let me think. I might have helped on the middle eight, but I couldn't swear to it. I do know he had the song around, in Hamburg, even, way, way before we were songwriters" (All We Are Saying/1980). Paul McCartney apparently remembers a more collaborative creation and he went on to tell Barry Miles about the overall importance of the track to the band's launch: "We loved doing it, it was a very interesting thing to try and learn to do, to become songwriters. I think why we eventually got so strong was we wrote so much through our formative period. Love Me Do was our first hit, which ironically is one of the two songs that we control, because when we first signed to EMI they had a publishing company called Ardmore and Beechwood which took the two songs, Love Me Do and PS I Love You, and in doing a deal somewhere along the way we were able to get them back" (Many Years From Now). A 50th anniversary vinyl reissue was planned in 2012, but the album version (without Ringo on drums) was accidentally used. In a flurry of news, EMI recalled all of the records with plans to scrap them. Some copies found their way to collectors before the corrected version was pressed (I had a copy, but sold it). Beatles insider, Bill Harry, wrote a book about the recording of the first record called Love Me Do. The Beatles show no signs of slowing down. Both Paul and Ringo continue to release new albums and tour the world with their positive energy and enthusiasm. George Martin's son Giles has been releasing in-depth editions of Beatles album projects over recent years, which include new mixes, demos, and outtakes. This month will see the release of a deluxe Revolver box set, chronicling the group's highly experimental output in 1966. Dr. No continues below.
Beatles related posts: Paul at 76, Beatles Pac-Man, Interview: Fab 4 Mania, The Beatles: Mission to India, Sgt. Pepper 50th, The Beatles: The Curious Camera, Revolver At 50, Ringo Rocks At 71, Pattie Boyd Exhibit, Peter Sellers to John Lennon: UK Satire, Ringo Tribute, John Lennon Remembered, Vintage Vinyl, Experimental Beatles, Ivan Vaughan, Essential Ringo, Paul at 72, Notes Behind the Curtain 1, Notes Behind the Curtain 2, Notes Behind the Curtain 3, Notes Behind the Curtain 4, 1960s Overdrive, Make Love in London, George Martin R.I.P., Tony Sheridan R.I.P., Cynthia Lennon R.I.P., Encouragement From Yoko, My Experimental Re-Mix & Film with Yoko, Lennon70 Tribute Film, Home Movies, Sean Lennon Release, Gilbert Taylor R.I.P., Atomic Art, Love Piece, Sean Lennon Scores, Sean Lennon Limited Edition, Fab Fall 2013, George Harrison, New Beatles Fashion, Yellow Submarine 50th. 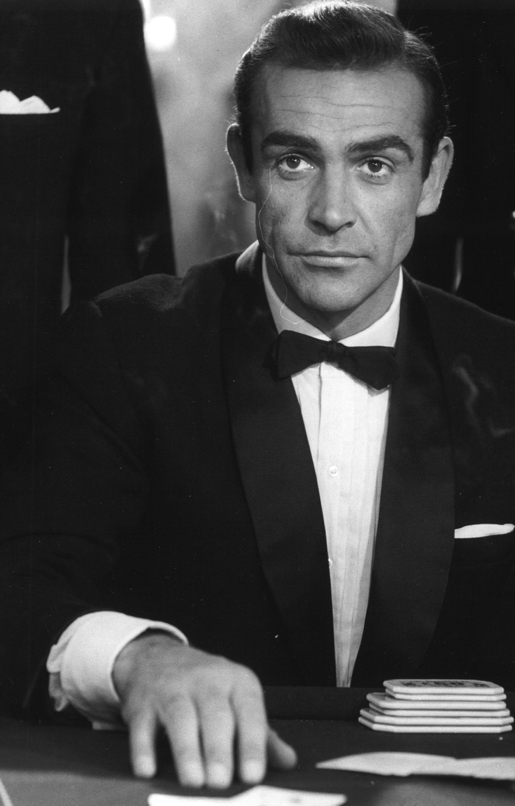 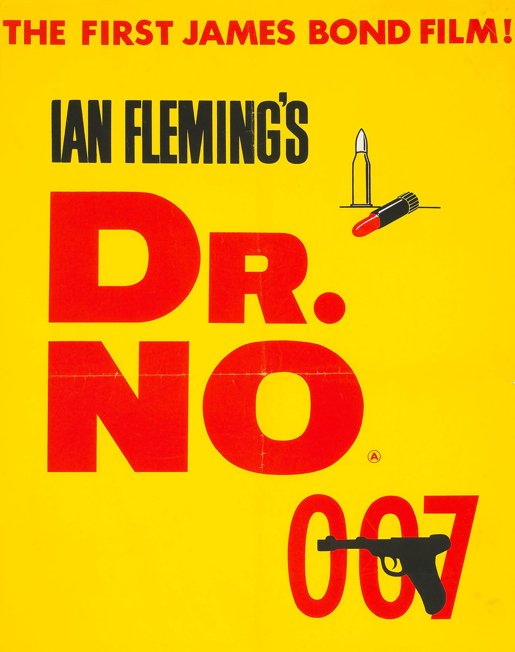 It was years before author Ian Fleming finally saw his literary creation make it to the big screen. Although "Casino Royale" had appeared on TV's Climax in 1954 (starring Barry Nelson and Peter Lorre), it took the combined efforts of producers Salzman and Broccoli, and the creative team of Terrence Young, Richard Maibaum, Peter Hunt, Ken Adam, John Barry, Monty Norman, Syd Cain, Maurice Binder, and Sean Connery to finally bring all the elements into place. Dr. No was eventually chosen as the first story to film and it was released on October 5th, 1962. The Bond franchise would be built over subsequent films, From Russia With Love and Goldfinger. The UK advance poster, like Love Me Do, arrived in simple attire: black and red titles/graphics on yellow, with a minimal aesthetic that anticipated the Raymond Hawkey designed 007 book covers for Pan in the UK. There had been spy movies going back to the beginning of cinema, but Ken Adam's stylized design approach to Dr. No helped to create an atmosphere for the Space Age. Speaking in 2002 with Todd Longwell for the Hollywood Reporter, Adam remarked that his seminal design for the "Tarantula Room" was the result of some resourcefulness late in his schedule: "I think it is one of my favorite sets, because it is so simple and theatrical or stylized. I think it somehow became the basis for some of the later Bond designs and certainly encouraged me to not only stylize Bond films but other films as well with rather simple means. Because this set was an afterthought and I had no money left. I think I had 450 pounds left. So I really had to come up with something very quickly that was very easy to construct and at the same time create a very important effect. It really worked (Longwell)." Adam probably drew from some of his experiences designing bomb shelters in the past to come up with the iconic domed room with asymmetrical ceiling- a reoccurring villain motif in the Bond series. Indeed, that modernist set coupled with pulp-style fantasy defined the cinematic Bond universe for me. Like that moment Patrick McGoohan's Number 6 enters Number 2's lair in The Prisoner, first-time Bond moviegoers surely knew they were suddenly in unknown territory, both technological and sinister. Bond recently wrapped up an era with actor Daniel Craig and fans are waiting to hear what is planned next for the franchise. Many of us hope for a reboot set in the 1950s or 1960s. And as much as I longed for realism as a teen, I'd sure welcome a return to the panache and Space-Age fantasy of the classics. In the meantime, Ian Fleming Publications have announced that distribution rights for Ian Fleming's books have reverted back to the family company and they plan to launch a new wave of Bond publishing soon. And last night, Bond fans in the UK attended a special 60th anniversary concert which has lit up the internet with excitement (I'm hoping it will be streaming on Amazon soon).
See Spy Vibe for many James Bond and Ian Fleming posts, including:  Bond at Bletchley, Spy Vibe's interview with Fergus Fleming, Ian Fleming Grave, SE Asian 007, Fleming Jamaica Book, Bond Japanese Editions, Fleming Chinese Edition, Chitty Chitty Bang Bang 50th, Ian Fleming: Mt. Demon Hell Japan, Collecting Fleming, Live and Let Die 60th, Appropriating Bond Exhibit, The Goldfinger Variations, Double 007 Book Designs, Double 007 designs II, rare Ian Fleming edition, Book Design Dopplegangers, Turkish Bond design, Ian Fleming Letters, Erno Goldfinger, Noel Coward, Whispering Jack Smith, Hawaiian Guitar, Joe Fingers Carr, new Ian Fleming Catalog, Jon Gilbert interview.
There were, of course, various connections between these two iconic camps, mostly notably: George Martin produced the Goldfinger single with Shirley Bassey and signed Matt Monroe to EMI (the singer later recorded From Russia With Love), and Martin later worked with Paul McCartney on Live and Let Die. Bond and Beatles films shared cast members -drawing from the many talented performers in the UK at the time- and shared a location in the Les Ambassadeurs club gaming room. Sean Connery quipped about The Beatles in Goldfinger, The Beatles (and composer Ken Thorne) spoofed Bond in the movie Help!, and both Paul McCartney and George Harrison picked up Aston Martin DB5s (George's sold at auction in 2011 for £350,000.00). Ringo Starr later married Spy Who Loved Me actress Barbara Bach. And Swinging London just keeps swinging! 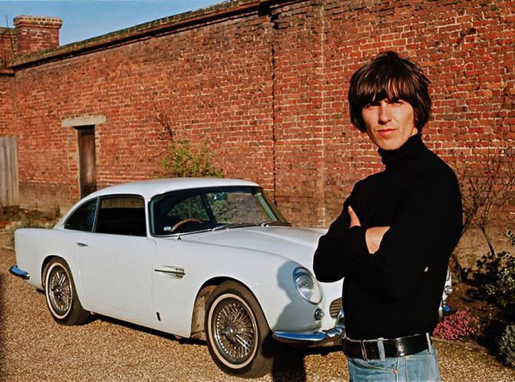 On this anniversary of Bond and The Beatles, try to imagine what it was like to be there 60 years ago in 1962, getting the first taste of new artistic visions. Love Me Do and Dr. No must have seemed fresh and exciting, but surely folks would have wondered what would follow. One-hit wonders? The Beatles were constantly asked what they would do after their popularity ran dry. So just image you are there. You put the needle down on the record... The lights go down in the theater... and the new world begins... 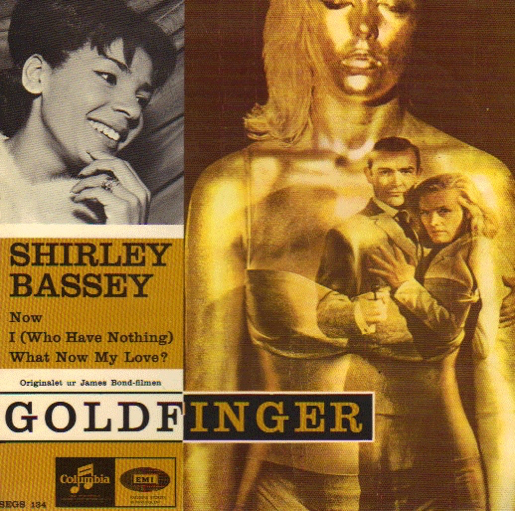