007 PROP REPLICAS
The Commander Bond Network announced something rather exciting today. For those of us who combed toy shops as kids for 007 toys, and more often, had to work like NASA engineers to create Bond-style gadgets cobbled from household items (cardboard and black paint make a great silencer), a better-late-than-never deal is in the works to produce officially licensed props from the films themselves. The most interesting prop listed so far is a replica of Scaramanga's golden gun. I wonder if it will assemble from a golden lighter, pen, etc? Click image below to enlarge. 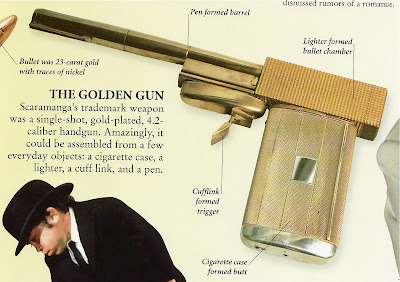 From the CBN: Big Chief Products Ltd. is proud to announce a license agreement with Eon Productions/Danjaq LLC to produce a range of movie prop replicas, based on the gadgets and related items from the James Bond film series. Working in partnership with appointed exclusive distributor Factory Entertainment Ltd. Big Chief will release a comprehensive range including entry price point replicas, through to high-end collectibles. These authentic, highly detailed replicas of iconic items featured in the James Bond films are officially licensed by EON Productions/Danjaq, LLC and are based on studies and examinations of the actual screen-used props to ensure maximum accuracy.

Items currently in development include 1:1 scale replicas of: Scaramanga’s golden gun from The Man with the Golden Gun (1974); the fearsome metal teeth worn by Jaws in films The Spy Who Loved Me (1977) and Moonraker (1979), and Solitaire’s tarot cards as featured in Live and Let Die (1973). Factory Entertainment will begin offering these exciting new James Bond collectibles both direct to consumer and at wholesale, worldwide from late 2009.

Big Chief director Mark Andrews said: “We are thrilled to be working with EON Productions. As fans ourselves we know people have been eager for James Bond prop replicas for many years. We are committed to delivering a range of products from the heritage era films right up to the current Daniel Craig films which people will be proud to own.” Big Chief and Factory Entertainment are each comprised of industry veterans, who are passionate about delivering high-quality limited edition collectibles and operate offices both in the UK and USA and have worldwide distribution channels.