Spy Vibe is excited to contribute to the upcoming Blu-ray edition of Elio Petri's cult classic, The 10th Victim (1965). The film, based on the 1953 short story Seventh Victim by sci-fi author Robert Sheckley, features Mod fashion, design, architecture, Op Art, Pop Art, cars by Jaguar and Citroen, Marcello Mastroianni, Ursula Andress, and a cool soundtrack by Piero Piccioni! Blue Underground will be sending copies of the Blu-ray in August, so keep Spy Vibe on your radar for a chance to win the movie for free! Blue Underground has finalized the disc details below. 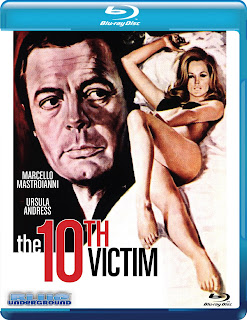 Note that some of the following ad copy is from original '60s press releases, which didn't quite get the plot facts right (In the story, Marcello is not on his 10th hunt). Culturally, both Sheckley and Petri are celebrated for their commentary on violence and entertainment in society. Although The 10th Victim offers us a stylish fantasy from 1965, the film also mines Italy's gladiatorial history and predicts the future of "reality" entertainment of the contemporary world. From Blue Underground: 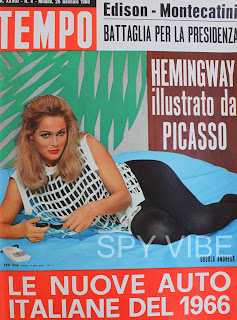 "The Original sexy '60's cult classic is back! It is the 21st Century, and society’s lust for violence is satisfied by “The Big Hunt,” an international game of legalized murder. But when the sport’s two top assassins (Marcello Mastroianni and Ursula Andress) are pitted against each other, they find that love is the most dangerous game of all. As the world watches, the hunt is on. Who will become THE 10th VICTIM?

THE 10th VICTIM is the international cult classic whose wild action and sexy style has influenced a generation of movies, from THE RUNNING MAN to the AUSTIN POWERS series. Now this outrageous satire has been newly remastered from the original negative and is presented here in groovy High Definition!"