Whether it's Dr No sabotaging early missile tests (Dr. No), Spectre holding the world ransom with atom bombs (Thunderball), Blofeld ransoming the world with germ warfare (On Her Majesty's Secret Service), diabolical scientists who want to rid the planet of mankind and rule a new eden (Spy Who Loved Me, Moonraker), or media moguls who want to hold all copyrights to world chaos (Tomorrow Never Dies), the James Bond baddies often reflect the fears of the times. Whatever their evil scheme, however, they almost always are styled in Nehru jackets (see Spy Vibe's post Nehru Jackets). The Guardian recently looked at some some famous Bond Baddie plots here. The Empire On-Line also posted a look at the Bond Baddies today. 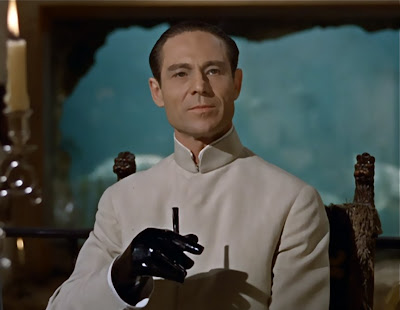