Spy Vibers should be very familiar with the name Brian Clemens. The producer and writer looms large in our hall of fame with projects like The Avengers, The New Avengers, Adam Adamant Lives!, The Persuaders, The Adventurer, The Baron, The Protectors, The Professionals, and many others. His film credits include Dr. Jekyll and Sister Hyde, Captain Kronos, and the Golden Voyage of Sinbad. It was Clemens who wrote the pilot episode of The Avengers and remained the script editor, writer, and associate producer throughout the show's long run. If that wasn't enough to earn him his OBE, we can also thank him for casting Diana Rigg as Mrs. Emma Peel! The British distributor Network has announced in their newsletter that they are releasing a Hi-Def edition of his series, The Professionals (1977-1983), and that Brian Clemens himself is now working to bring the crime-action classic to the big screen. More below.

From Network: "We're excited to hear that the show's creator Brian Clemens is talking about a big budget remake that will soon be gracing our screens. Clemens will be acting as executive producer on the new film which is due to start shooting before the end of the year, he spoke to his local paper The Croydon Advertiser, 'It's going to be a big action movie. The script is done and now we are looking at casting. There's some big names being talked about but it's all about making sure they're available at the same time. Getting the right people is very important because the show means a lot to the fans. It will be set in the modern day. It's a huge task to shoot a period film and you'll always get someone complaining there's the wrong sort of phonebox used in one scene or something. The show can easily fit into the modern day. To any Professionals fans who are worried about the remake, can I just point out I had nothing to do with the Avengers movie in the 1990s. The less said about that the better.'"

I would prefer to see a period film, but I do have faith in Clemens and his brilliant imagination. I hope the project is a great success. I'd love to see him go on to make a period thriller with his trade-mark cocktail of charm, fantasy, humor, and action. Brian Clemens below with Diana Rigg in 1966. 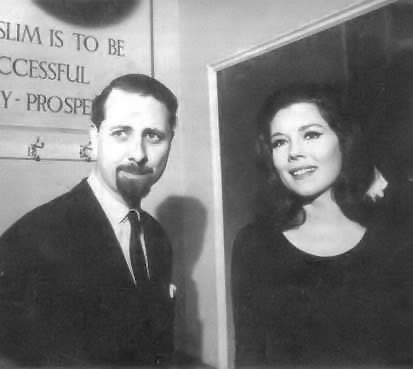 Can you help to support Spy Vibe? Please make a small donation with our secure Paypal tip-jar link at the top left of the main page. Nothing is too small to help cover the increasing bills for the domain, web-forwarding and other costs to maintain the site. Thank you!
Posted by Jason Whiton at 9:44 AM