FOR YOUR SHELF ONLY: BIG FUN COLUMBUS

One of the highlights of my mission to Pulpfest last summer was making a daily pilgrimage to Big Fun Columbus. Nestled among the restaurants and boutiques of Columbus' Short North arts district, the shop is a must-see destination for fans and collectors. I helped manage a toy store after college, so I could appreciate their effort to organize the space into a kind of Disneyland journey through major toy genres. Large cases, some floor-to-celing in height, focused on go-to items like Star Wars, GI Joe, vehicles, action figures, dolls, comic characters, etc. My Spy-Vibe eye naturally gravitated to gems like vintage Man From Uncle dolls, James Bond figures and cars, Gerry Anderson vehicles, and original Megos. On one of the first days of Pulpfest I brought Win Scott Eckert (Honey West, T.H.E. Cat, Green Hornet) and our group of pals to the store. You could see everyone immediately light up, as the little kids in us came to the surface to search the shelves for treasures. I helped Win score the Man From Uncle board game, and we all ogled over a display of Six Million Dollar Man, Wild Wild West, and Planet of the Apes dolls. Big Fun became a home away from home for me and I look forward to spending more time there in the future. The shop just celebrated its one-year anniversary this week, so I thought it would be a perfect time to introduce it to Spy Vibers and to have a brief chat with the owner (a fellow Jason) about cool toys. Images are from last summer. 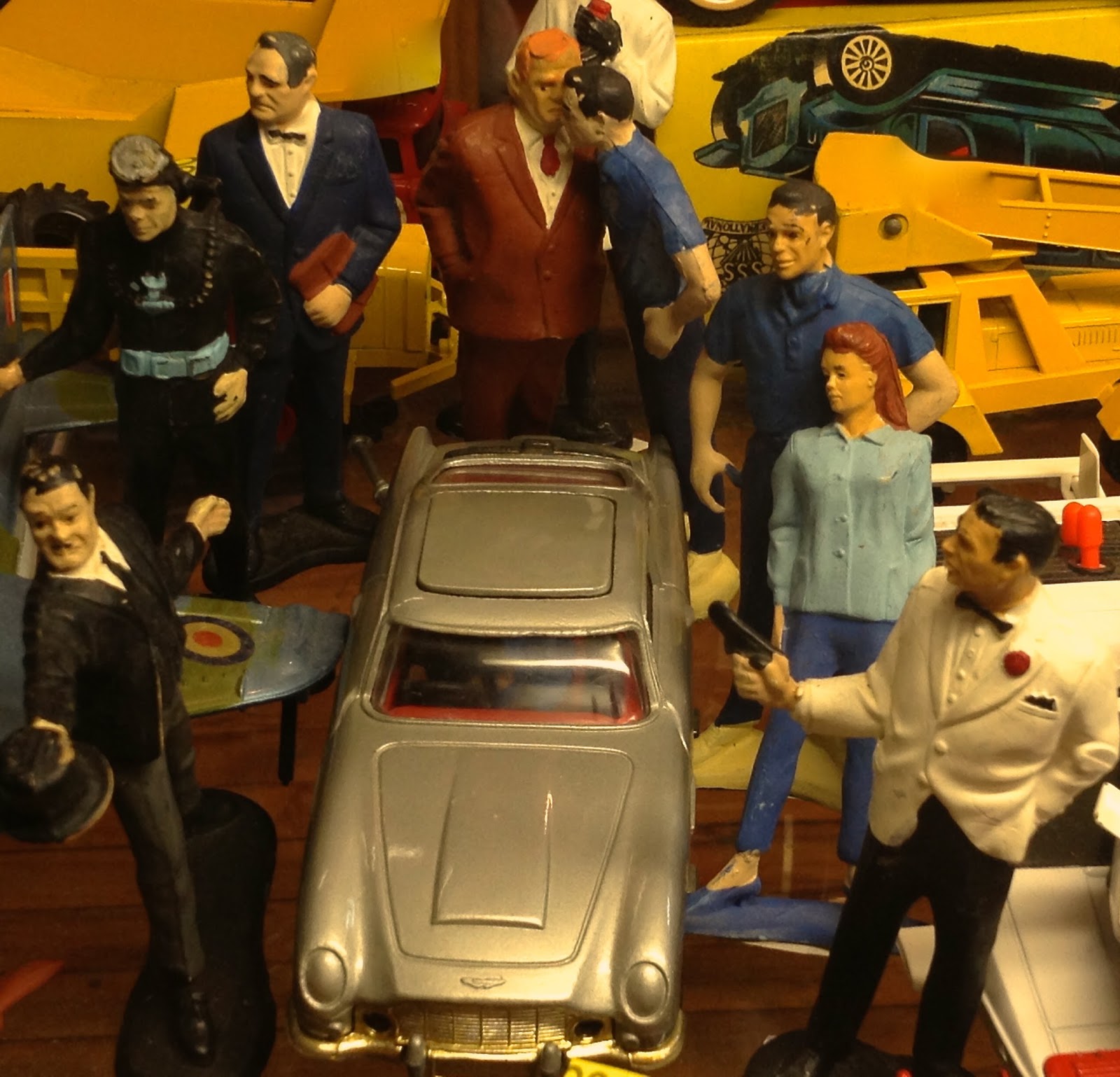 Tell us a little about the genesis of Big Fun Columbus. Did your shop evolve from the Cleveland store?

I worked at Big Fun Cleveland for 10 years and had my own place for 2.5 years called Spaceman Floyd's. After I sold my business, I searched for a new home and found the Short North. I proposed a partnership with my old boss, Steve Presser, and we've been doing this for a year now!

Were you a collector growing up? What were some of your favorites?

I was given a stack of Marvel comics when I was five years old- my uncle's old comics. It was all down hill from there! I grew up reading Marvel. I had lots of super-hero toys, GI Joe stuff, Monsters, Godzilla, Apes, and Star Trek. 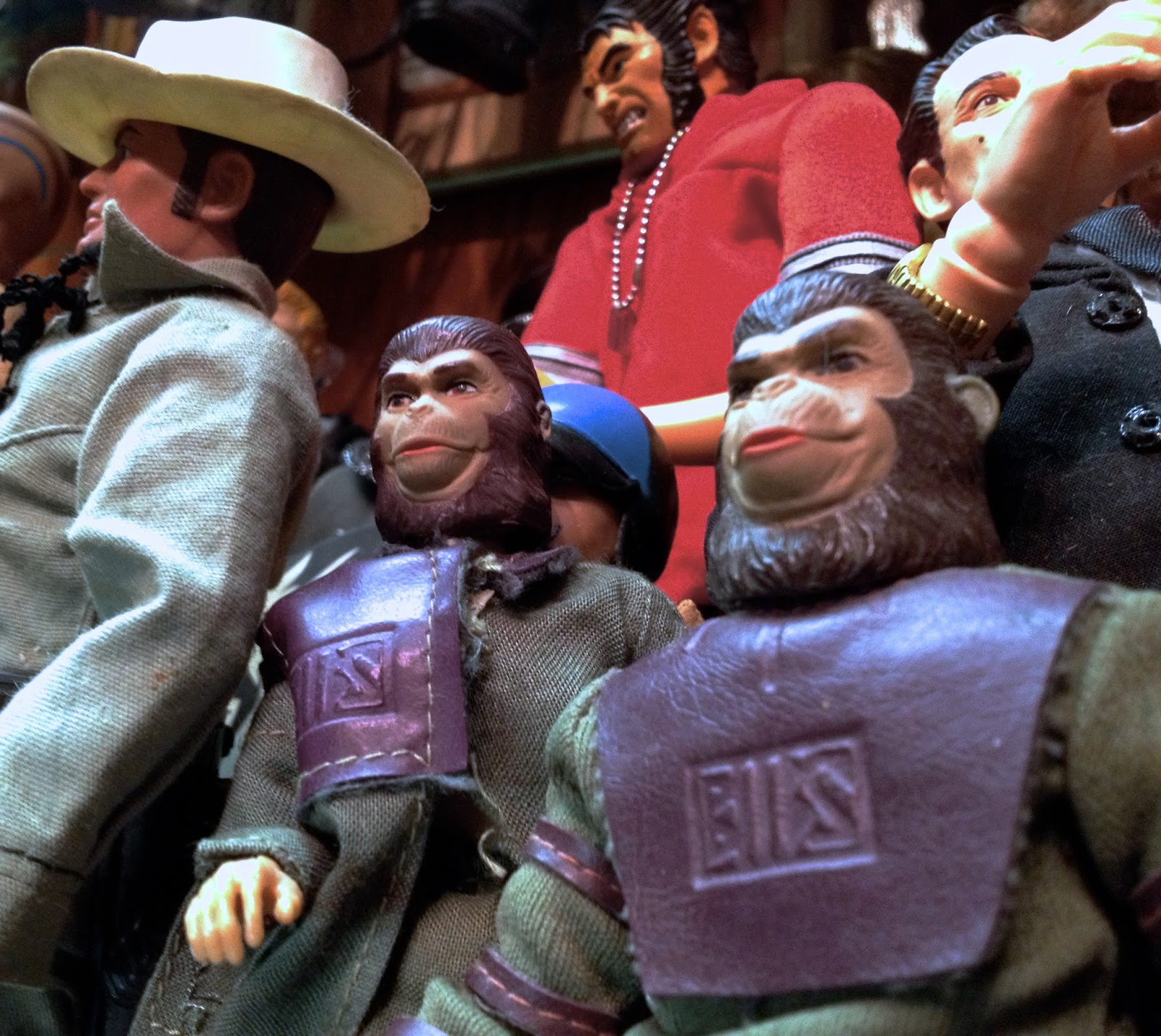 Do you still collect? Are there treasures you look for now?

I still collect, but I have to be picky. I can't take home everything that comes into the shop. I grab some Planet of the Apes toys, Marvel Legends, Walking Dead, etc. Treasures, personally? It's a zen thing. I bought a 1970s Don Post Fly mask at the last Columbus toy show and a Marx Daniel Boone figure. For the shop, it's a lottery on what comes in. You never know what will come in.

I was really struck by the presentation in your store. Tell us about how it is organized. What are the main categories you try to cover?

Thanks for mentioning organization. I try real hard to keep it orderly. We're always one car-load of toys away from chaos. Well, it's mostly sectionalized: Gags, coffee mugs, lunch-boxes, GI Joes, Star Wars, Marvel, DC, Legos, But the structure changes frequently because of toy buys. 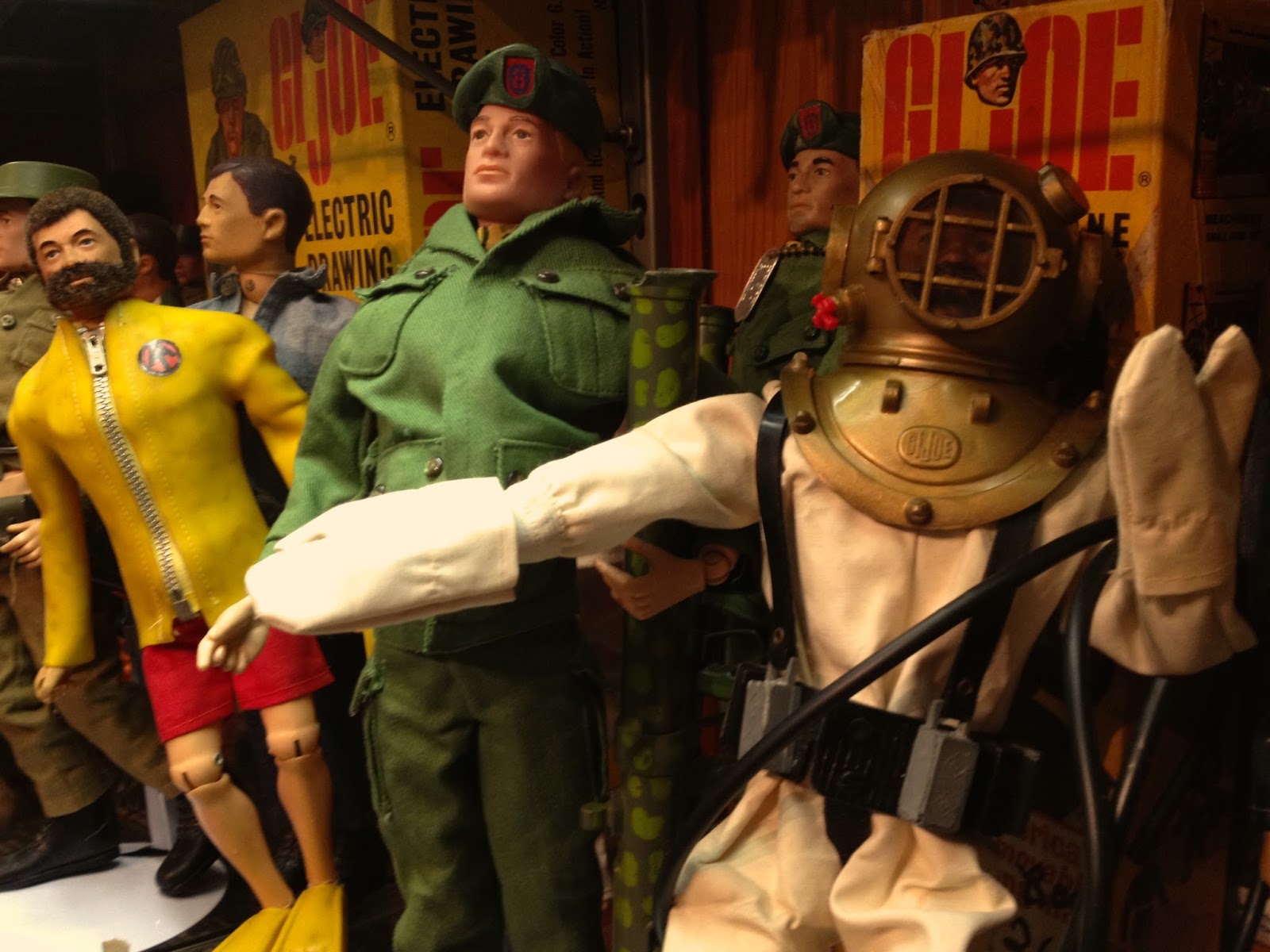 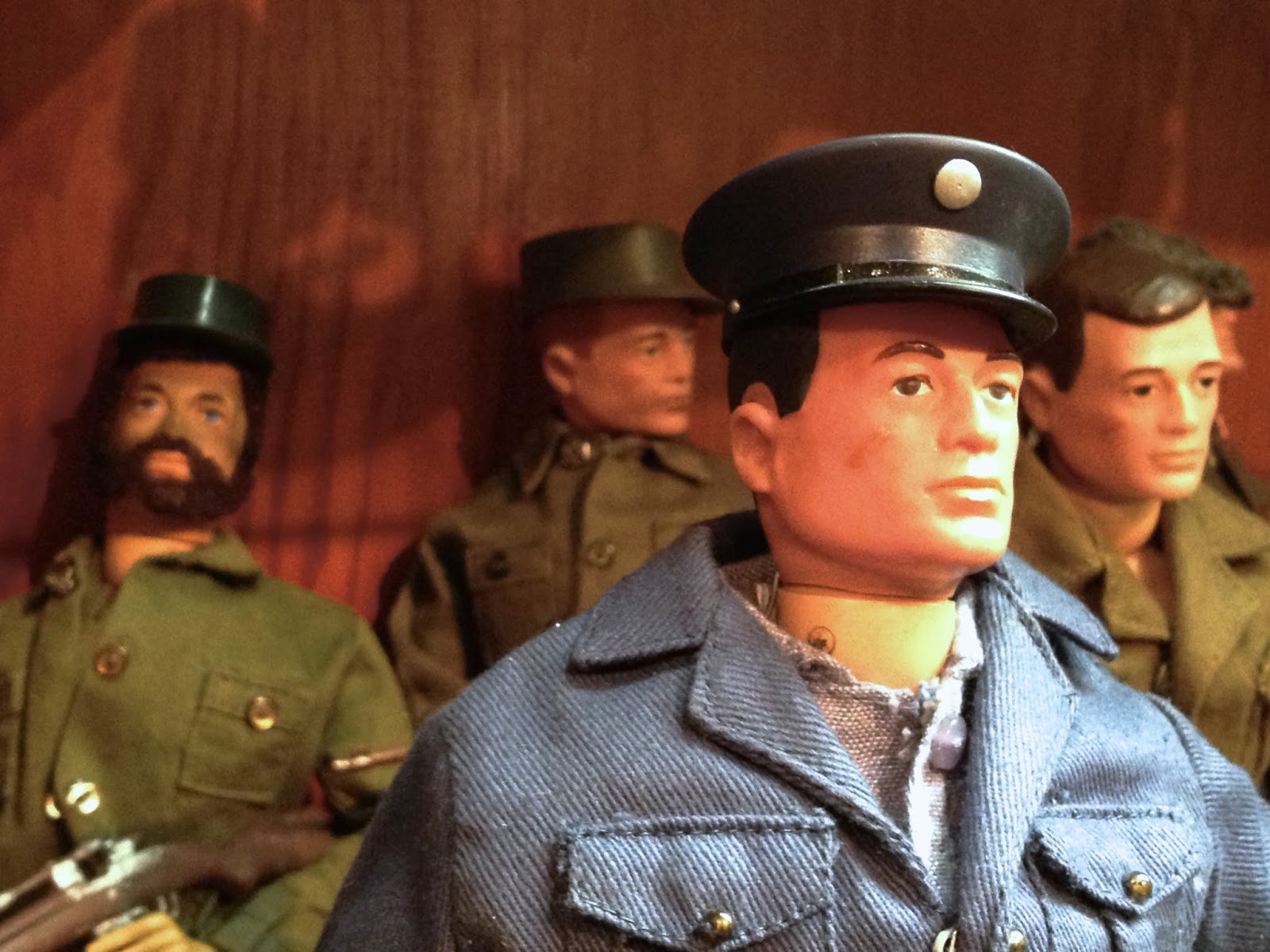 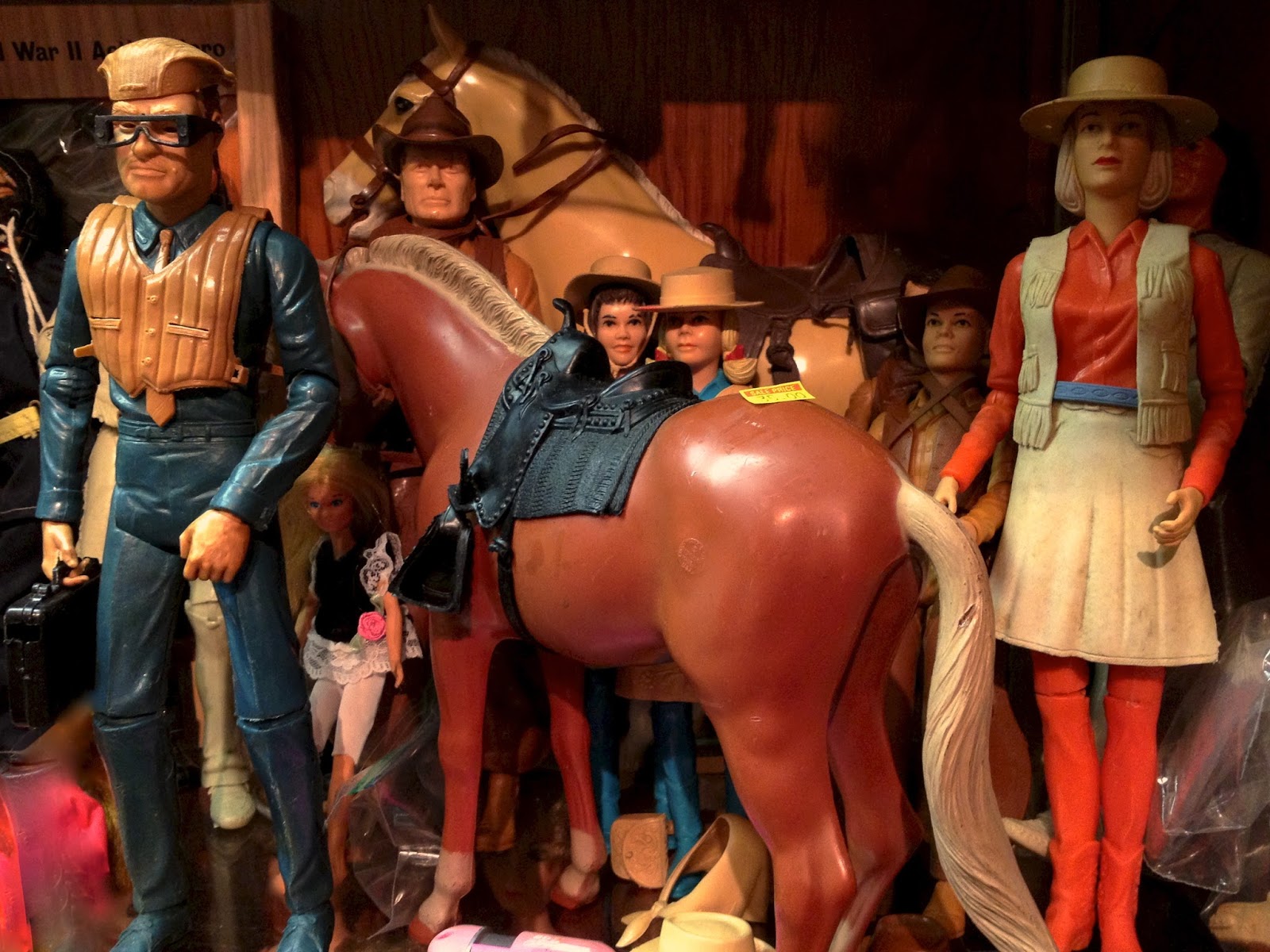 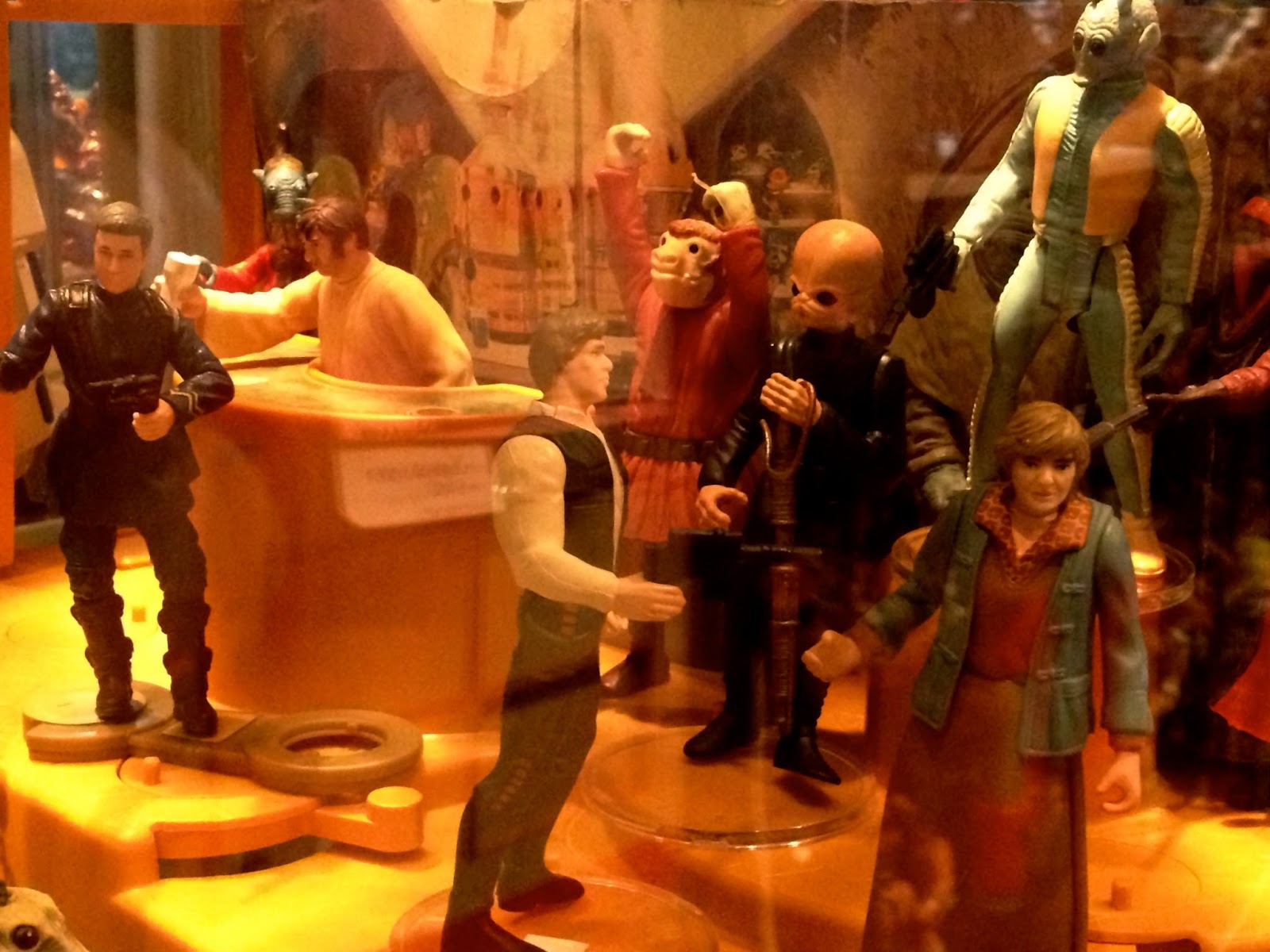 Are there certain items in most demand, like vintage Mego or Star Wars? What are the mainstays of the vintage toy business?

Star Wars will have another 10-15 years of shelf-life because of the new movies. It's a nerd renaissance right now with all the movies: Super-heroes, Godzilla, monsters, etc.

I’m sure people contact you looking for rare items. What are some of the common holy grails people ask about? 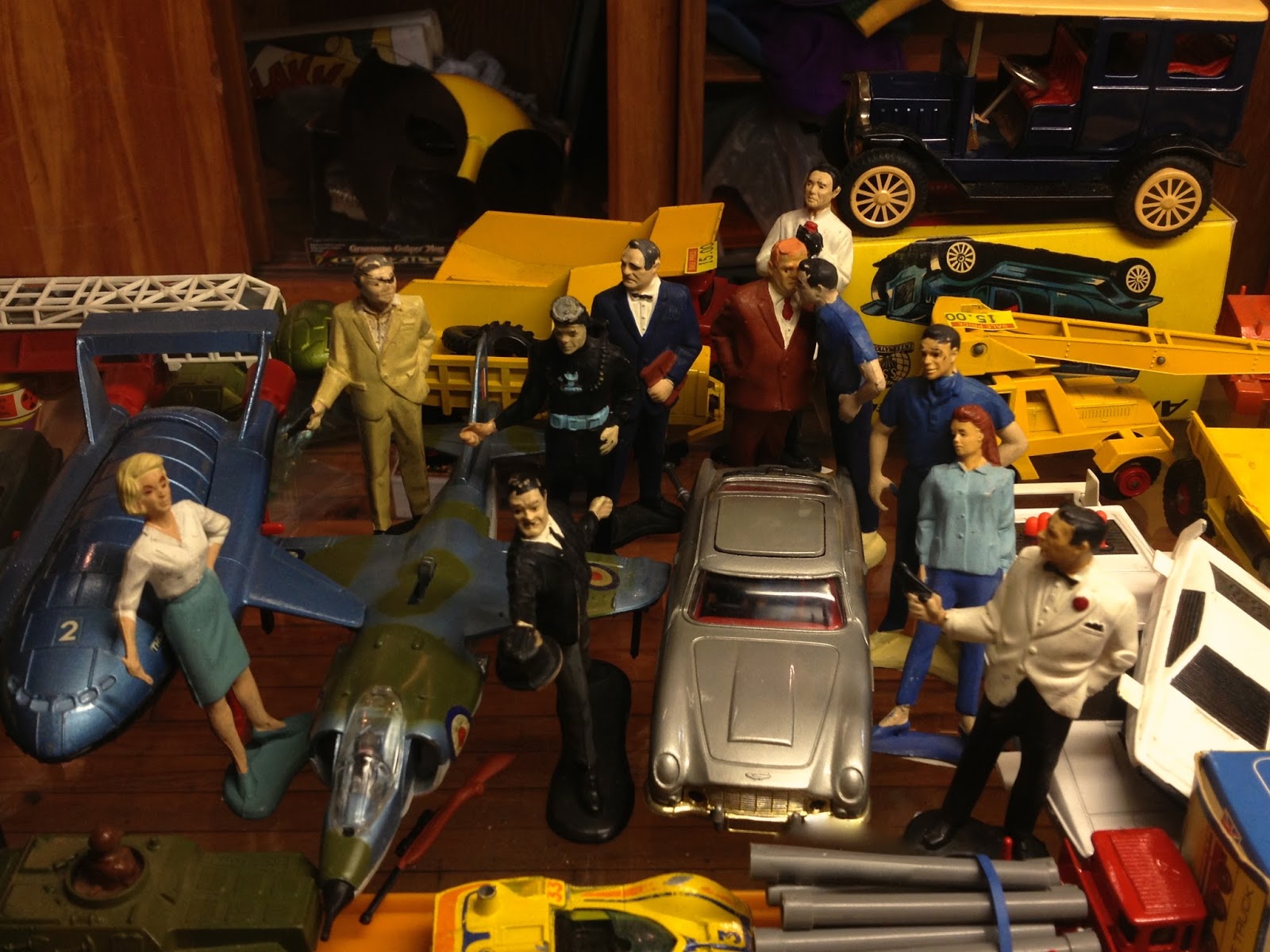 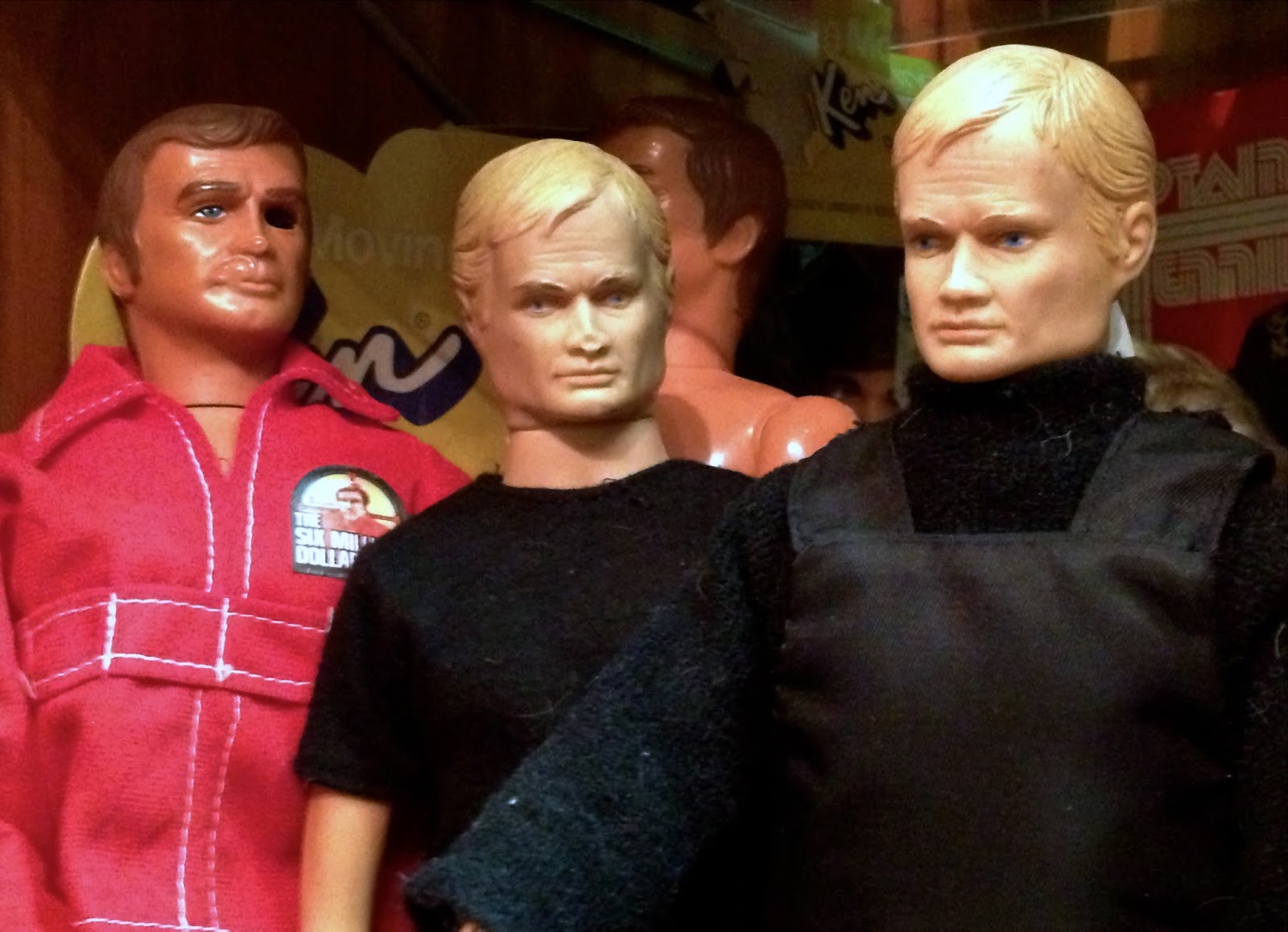 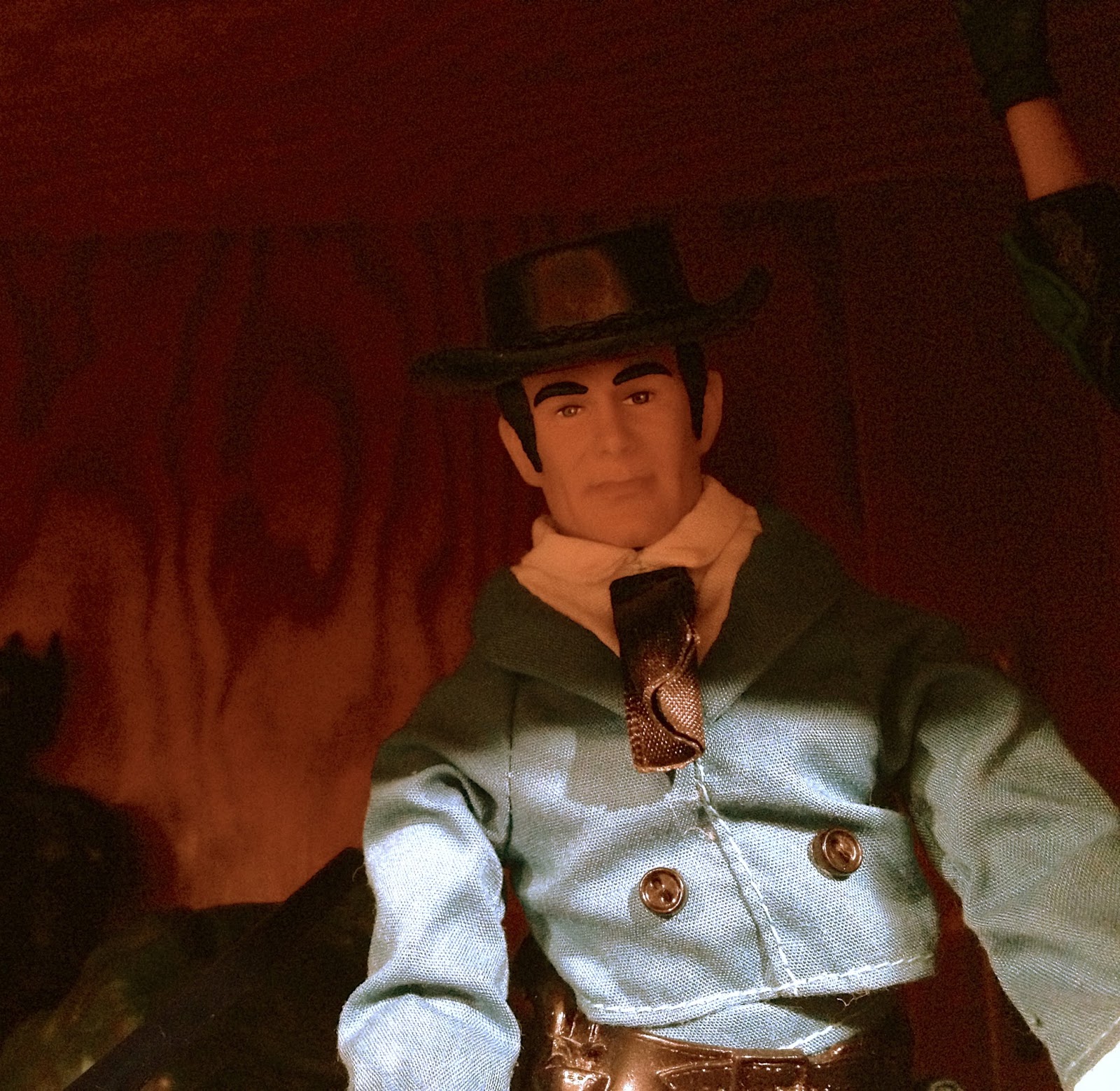 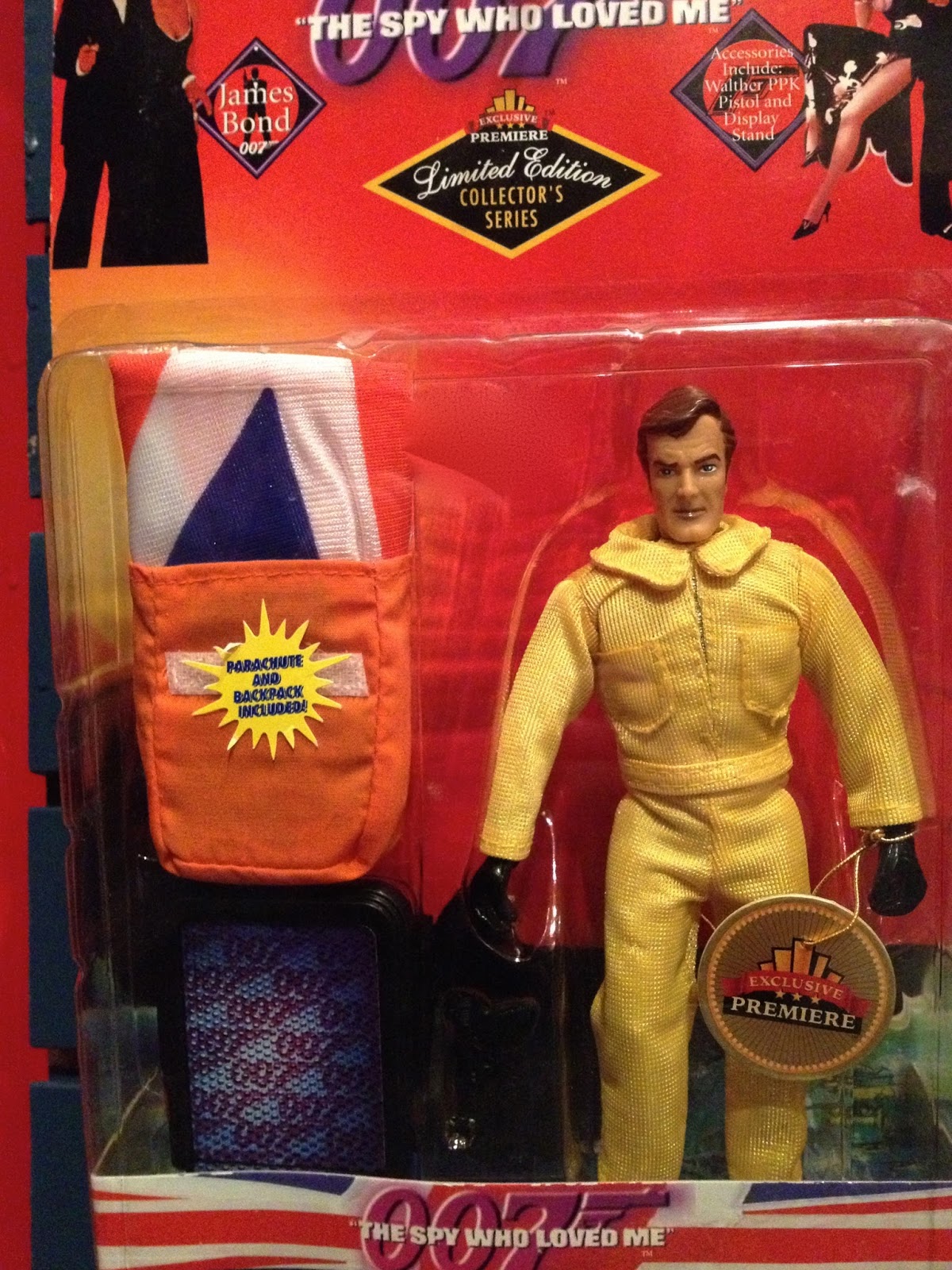 You had some great spy toys during my visit: James Bond, Man From Uncle, Wild Wild West, dolls and figures, diecast cars, games, etc (see above images). What are some of the most common and most rare items you’ve seen from 60s spy lines?

The spy toys we see frequently are the Bond Johnny Lightning vehicles and play sets (the more recent stuff). The coolest vintage piece we've seen so far is the Bond Attache Case from the 1960s. It had all sorts of great attachments.

I really want to find that! I’ve seen some new retro-style Mego dolls that looked cool. Are there re-releases that you are excited about? Any sign of retro-styled spy items?

I don't know if there are retro-styled spy things coming in. Most likely. Toy companies like covering repeated ground these days. I'm excited about Funko's Reaction line, done in the style of the old Star Wars figures. They're doing Goonies, Firefly, Universal Monsters and more. 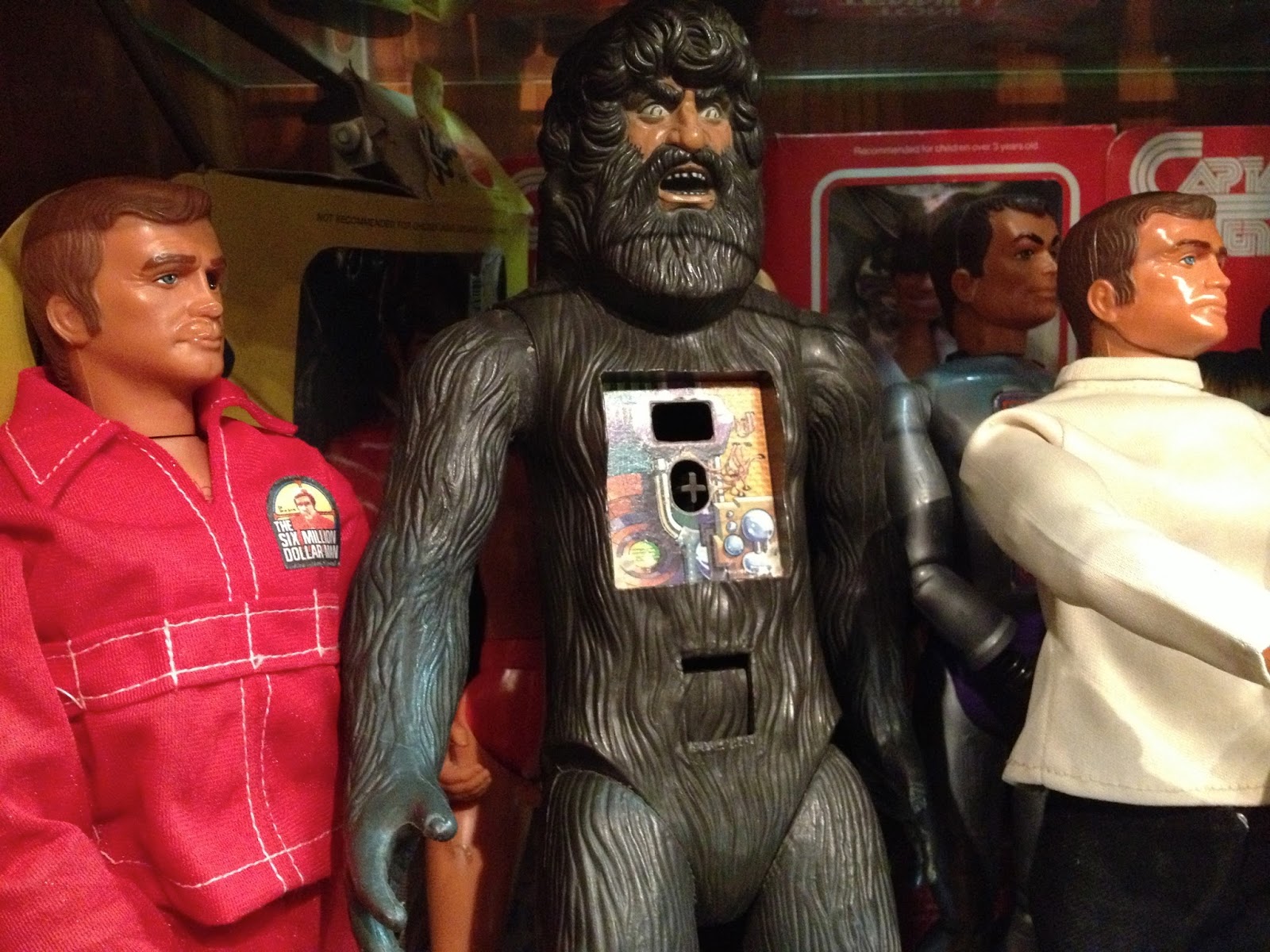 You also had some awesome Six Million Dollar Man toys, including the Bigfoot doll. What are some of your personal faves from that Era? Tell us a bit about some of the coolest design features.

We've had two Bionic Bigfoots come in. Great toy! I'm a fan of the 1970s Megos. I love the Star Trek figures (and the new versions they've reproduced), the Apes figures, and super-heroes. I also appreciate the large Shogun Warriors from the mid-70s. The Godzilla with the shooting fist, from the Shogun series, is probably one of the coolest pieces. There's a lever in the back of its head to make it's fiery tongue stick out. [original TV ad below].

During the week I was in town, you took in some fantastic collections and found cool stuff on buying trips. How do you mainly stock the store?

Well, 50% or so of our stock is vintage, so we're dependent on the items folks bring in. Today, for example, I know there are some 70s toys coming in and some Star Wars Lego sets. Sometimes folks give me a heads up, but not always. I've found myself tracking down Pokémon stuff online. We don't get many Pokémon toys from walk-in sellers and lots of kids ask.

Do you have to worry about counterfeits in the toy world? Are there common signs to watch for?

I'm not worried about counterfeits. There was a guy in Texas reproducing card-backs for vintage Star Wars, GI Joe, Indiana Jones, etc. (advertised as repros) and he had reproductions listed in the descriptions. Occasionally, some collector will try to be tricky. But those examples are in the minority. Most folks are honest.

How do you think toys reflect culture and time period?

Toys, weirdly, do reflect the culture. We may not recognize it at the present moment. Hasbro had to change the original 12'' Joe from a 1960's war toy to a bearded adventure toy in the 1970s. The population was war-weary with Vietnam. Godzilla was originally a subconscious product of the Hiroshima and Nagasaki bombings.

As a spy collector who grew up mostly on re-runs of westerns, I was always fascinated by the transition from cowboy toys in the 1950s to the secret agents of the 1960s. This may be a generalization, but I believe the westerns reinforced the post-war drive to create a suburban ideal and to enforce our ideology on other countries- much like Matt Dillon making the world a safe place for "decent folks." With the Cold War heating up and writers like Fleming, John le Carre, and Deighton bringing awareness (and movie adaptations) of spy intrigue and technology, it made sense for kids to see the secret agent as the hero of the space age. Interestingly, the spy is a solitary character and doesn't operate, like a Matt Dillon, in public with community support. Maybe this hero-type was riding the same wave as Antonioni's films, capturing the alienation of a changing society. Vintage James Bond toy ad below.

What are some of the rarest items to come through Big Fun?

The rarest item I've seen so far is the closed box, removable cowl Batman Mego. The closed boxes were only around for 6-8 months in the mid-70s. All the kids kept opening them to see the figure. Mego did the clear box  (plastic window) soon after.

There’s a new Godzilla film opening this month. Are you stocking any cool vintage or newly produced kaiju stuff?

Unfortunately, our stock of Godzilla has taken a hit. We have a few newer figures, but nothing vintage. I just bought a lot of Ultraman toys the other day.

If “Toy Story” was real and your shop came to life after the humans went home each night, which toy would you want to be?

My real Toy Story pick would be the Captain America Mego. That was always my favorite character and toy.

Thanks, Jason! I look forward to visiting you guys again sometime.

Thanks for the questions, Jason. Take care.

Spy Vibers, step into this time-machine video compilation of vintage toy ads. You'll see many of the items Jason and I talked about, including Mego, GI Joe, Star Wars, and Star Trek. Enjoy!