Fleming Week Continues: Fleming's Typewriter. My Art students and I have wrapped up another school year, and I find myself diving into an even busier schedule writing the manuscript to a new book about the spy boom (details soon!) and planning a visit to Elstree Studios, Portmeirion, and various locations used in classic 1960s TV series. But before we rush off on summer missions, I invite Spy Vibers to pause and recognize an important date on the Spy Vibe calendar. 007 creator Ian Fleming was born on May 28th, 1908. We are celebrating his birthday all week with new articles based on Spy Vibe's most popular posts about our favorite author. 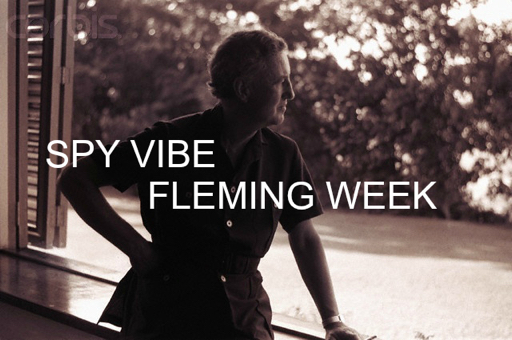 Ian Fleming fans have long wondered who the mystery buyer was who purchased the author's gold Royal typewriter from Christie's in 1995. There was much speculation this rare artifact went to Pierce Brosnan, but the former 007 actor denied the claim. Meanwhile, collectors have continued to hunt for gold editions of the Royal Quiet Deluxe. Royal began producing the gold model in limited editions starting in 1947. Fleming ordered his typewriter in 1952 to celebrate (and revise) his first 007 novel, Casino Royale. We sometimes see Gold Royals on eBay, but the models always seem to be a slightly different design. I believe someone out there is working on a database to catalog the typewriters and their design variations. It has been suggested that Royal Golds were designed by different designers over the years. But what made Ian Fleming's circa 1952 model unique? Below: Fleming's typewriter. 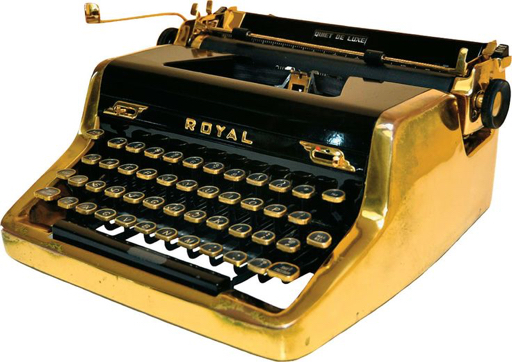 To explore this question, I asked agent Cary Mark to tell us about his father's 1953 Gold Royal, similar to the one Fleming owned. "The Fleming model is more streamlined and has rounded front corners, compared to the square model one sees on eBay. You can see that the gold case runs in front of the black space bar. The other model has squared-off front corners and the black space bar looks totally different at the very front of the typewriter. The two levers on the front panel that control ribbon color and ribbon reverse look totally different on both models, as well as the trim surrounding them. Since they are different models, I am guessing that many of the individual parts are different and not interchangeable." Below: Close-up views of Cary Mark's Royal. 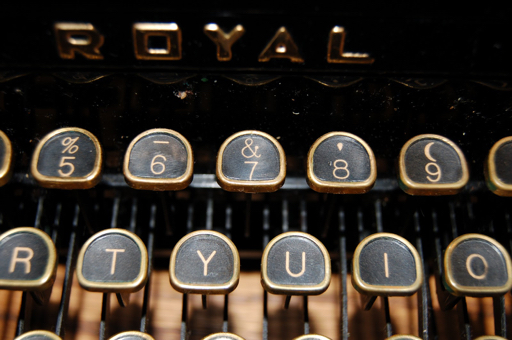 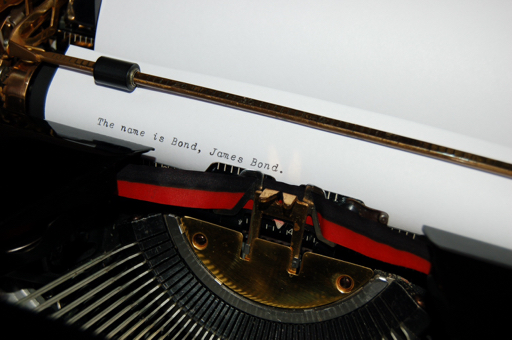 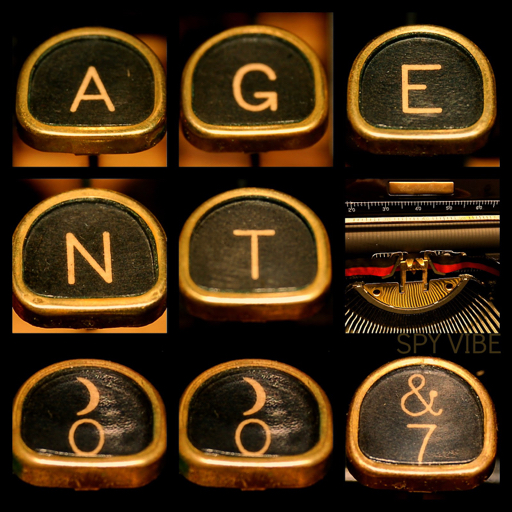 
"Lot Notes: Ian Fleming commissioned this typewriter from the Royal Typewriter Company in New York in the spring of 1952, as a replacement for his old Imperial. The first draft of the novel Casino Royale, introducing 007 agent James Bond, had been read enthusiastically by Fleming's publishers Jonathan Cape. However they commented that 'although the details were original and interesting ... the book, though publishable, needed extensive revision.' For this revision, Fleming had chosen a symbol to remind himself where, with luck, his future lay. This was a new typewriter to replace his old Imperial, a golden typewriter. He had ordered it in New York and on May 17th, some weeks before submitting the manuscript to his publisher, he wrote to a his friend Ivar Bryce in New York asking him to bring the typewriter over on his next trip to England: 'Here is one vital request. I am having constructed for me by the Royal Typewriter Company a golden typewriter which is to cost $174. I will not tell you why I am acquiring this machine.'

"The gold-plated typewriter duly arrived and Fleming completed the revised manuscript which was accepted by Jonathan Cape for publication the following April. Fleming typed all his subsequent novels on this gleaming but compact machine that seems to encapsulate the half-fantasy world of ostentatious 1950's gadgetry so familiar from the Bond novels themselves." Below: Cary Mark's Royal. 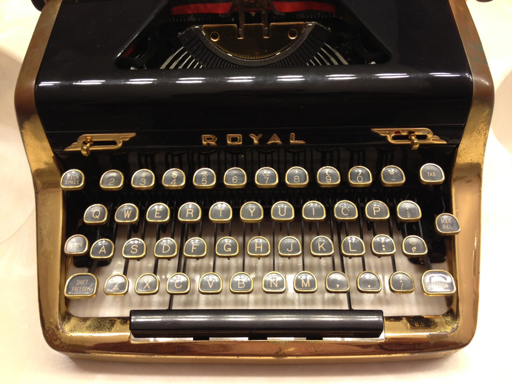 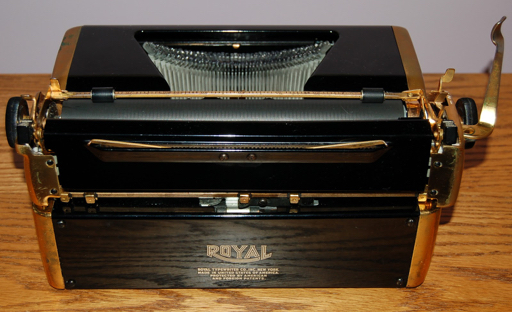 Ian Fleming's typewriter holds much fascination for me. As a vital artifact, it is the very conduit between the author's imagination and the words tapping out, one at a time like beads on a thread, to become Casino Royale, Moonraker, Dr. No, Goldfinger. The Royal transports me back in time like a Tardis and I can imagine the thoughts forming on the page: "The eyes behind the wide black rubber goggles were cold as flint. In the howling speed-turmoil of a BSA M20 doing seventy, they were the only quiet things in the hurtling flesh and metal. Protected by the glass of the goggles, they stared fixedly ahead from just above the centre of the handlebars, and their dark unwavering focus was that of gun muzzles" (From a View to a Kill). Astonishing! Like my experiences looking at original Beatles instruments, seeing the Royal brings me closer to those moments of creation. I wonder if Fleming's original Royal will be exhibited in the future? Below: My collage of images: the author and his Royal Gold with Cary Mark's X key. More about famous writers and their typewriters here. Collectors Weekly article here. Spy Vibers, I'm making my first trip to England later this month. If you can help, please consider making a small donation in our Paypal tip-jar at top-left of the page. You can also help by shopping my current listings on eBay here. Thank you! -Jason. 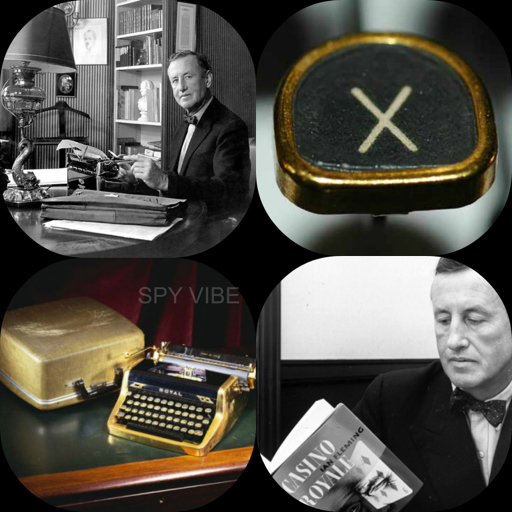