Farewell Steed: a personal reflection on Patrick Macnee. I was fortunate to spend time this summer touring many film locations from The Avengers with fellow fans and writers. I can't begin to describe how nurturing and transformative the experience was, except to say I finally felt as though I had found my tribe. Many of the attendees have written extensively about classic spy shows, Gerry Anderson, and Doctor Who, and it seemed every moment was filled with joyful discussions about our various new discoveries and projects. On the day after my extended tour ended, and a day after I shot this photograph below (curtesy of Alan and Alys Hayes), I received the sad news Patrick Macnee had passed away. I was already on to a new chapter of the trip to see friends in Cambridge. I woke early and walked along the water alone and tried to process the emotions. It had only been a week since I re-sent a long interview to Patrick Macnee and communicated with him about doing a foreword to my upcoming book about the thriller genre and 1960s Spy Boom. Now that he was gone, I was filled with a sense of loss for my earliest childhood hero. It was Macnee's John Steed who first introduced me to the world of spies and who led many of us, by his special gift of charm and sly humor, through years of well-dressed adventure. James Bond expert Ajay Chowdhury asked me recently over fish and chips (next door to Eon!) why I had such an affinity for British characters over ones from the US. I tried to describe elements that were more common in the UK, such as charm, flair and eccentric wit, but I failed to mention one of the main ingredients that Macnee and his countrymen (and women!) often brought to their work. Macnee had a special twinkle in his eye that expressed flair and humor, to be sure. But study any scene with John Steed and you will notice a look that revealed a man enjoying the moment and his fellow actors with deep affection, as well. You'll see that look of affection all through The Avengers, Adam Adamant Lives, The Persuaders, Randall and Hopkirk (Deceased), Doctor Who, etc. Watching my friends' faces light up in conversation during the trip, I found their own spirit of affection, like Macnee's, inspiring and contagious. Keeping this quality in mind, it's a nice reminder that we are here to share things that bring us joy and community. Patrick Macnee helped to set me on a course in life that eventually led me here to Spy Vibe and to meet an extended family in England and Wales, so I'm left with a feeling of gratitude for his great gift. Walking along the river, I stopped to express my grief and support to Patrick's son. I also felt regretful that I hadn't reached out sooner. His son wrote back right away to let me know that his mom and dad used to visit on Sundays while he was at Bedford in the early-mid 1960s. As a family, they would go on drives in the country and enjoy having tea together in Cambridge. It was such a generous story to share with me at that moment, about a day after his dad had passed away. It made me realize we were all processing this loss together as a community. And even though I found myself in a new city, I still hadn't strayed from Patrick's path. And by sharing Macnee's stories, we were keeping the home fires burning for a special man. Below: original Avengers Bentley and John Steed figure by Corgi (photo: Jason Whiton). 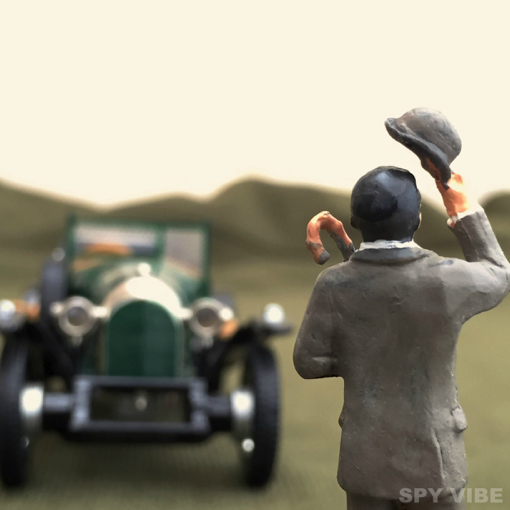