C.O.B.R.A.S DISCUSS COSTUMES ALL THIS MONTH!

The coalition of Spy Bloggers are teamed up this month to explore the fun and flair of Spy Costumes. Double O Section made the pitch in an excellent series on costumed heroes. Look below and on the Articles link above for Spy Vibe's current series of articles and video clips: MODS TO MOONGIRLS (and see writer Jason Whiton go Nehru!). We'll then toss the cap to David Foster at Permission To Kill, who will take it off from there next week! The coalition series will wrap up with Armstrong Sabian at Mister 8.

The 10th Victim (1965) director/Elio Petri, costume designer/Giulio Coltellacci. Continuing with our recent discussion of fashion trends in the early-mid 1960s, the notion of design-meets-the Space Age brings up one of my favorite films, La Decima Vitta (The 10th Victim). Within the same period as Courreges' Moon Girl collection (1964), Coltellacci made great use of fun elements like geometric cut-outs, two-tone and striped motifs, and PVC boots and plastic helmet/visors. To me, the film is a high-point of playful fashion in film, not to be challenged until Jean-Paul Gaultier's costumes for Besson's 1997 film, The Fifth Element. Visit the SpyVibe.com website for related Videos and information. 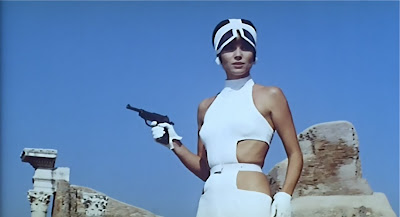 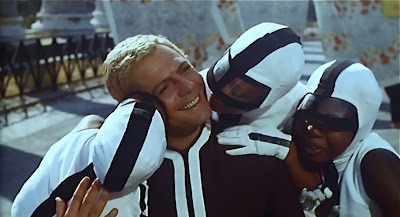 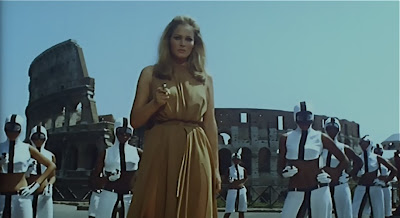 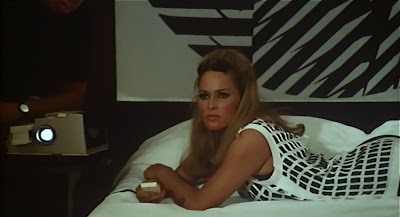