ROGER LANGLEY: OUR MAN IN ENGLAND

ROGER LANGLEY: OUR MAN IN ENGLAND
Spy Vibe continues to celebrate great spy production design with a Guest Set List from author and Six of One/Prisoner Appreciation Society's "number one," Roger Langley! Roger Langley is author of the biography “Patrick McGoohan: Danger Man or Prisoner?” which is available from Amazon, major booksellers, and direct from the publisher. Roger also has currently a book of fiction “The Prisoner Trilogy” available here. Radio interviews with Roger can be heard at www.patrickmcgoohan.org.uk and he, along with his wife Karen - who he met in Portmeirion, the Prisoner filming location - assists with the appreciation society based around the series, called Six of One, which you can join online. Six of One’s annual convention takes place in Portmeirion over the weekend of 27-29 March 2009 (next is 16-18 April, 2010). More information at Roger’s convention site. *links fixed 3/30 -Jason 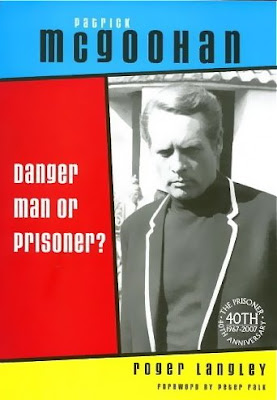 ***
1. The Quiller Memorandum (1966) - only full CinemaScope viewing properly presents this stylish film, benefiting from John Barry’s underlying score. This is especially so with the scene set inside the enormous stadium built by Hitler for the 1936 Olympics. Quiller is a sharp-looking sixties’ movie, using Berlin to good effect. The city is bustling and clean cut by day, with sinister events at night, literally revealing its dark Neo-Nazi element. George Segal is perfect in the lead. His style in the movie is mirrored on TV by Richard Bradford as McGill, in the series “Man in a Suitcase”. Add in Alec Guinness, Max von Sydow, Senta Berger and George Sanders, to make up a cast as good as the beautifully filmed surroundings and locations. 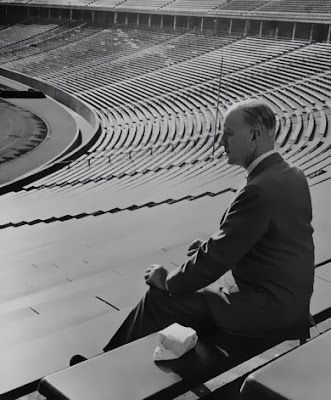 2. The Ipcress File (1965) - this groundbreaking movie has plenty of London locations: St. James's Park, Marble Arch, Whitehall, Westminster, Royal Albert Hall, Scotland Yard, Trafalgar Square, to name just some of them. A few have appearances in common with TV’s “The Prisoner”, including the underground car park (along with Guy Doleman as the spy boss in the film, who was also No. 2 ‘in the Village’). A strong cast is assembled with Michael Caine excellent in the lead, Nigel Green, Sue Lloyd and Gordon Jackson. 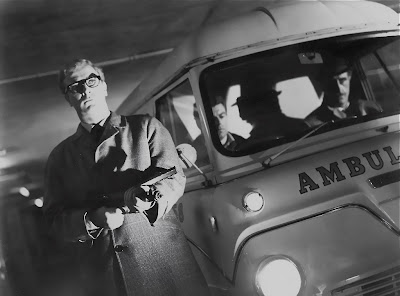 3. From Russia With Love (1963) - the train sequences on the Orient Express, take us from Istanbul to Venice. Robert Shaw is aboard as the menacing Red Grant. The moving setting provides tight and restricted surroundings, offering a backdrop - along with exterior views through carriage windows - for some excellent, action-packed scenes. As with Quiller, mentioned above, the ‘Cold War’ atmosphere is conveyed well. Shaw is perfect as the trained, icy assassin, enjoying curt exchanges with James Bond (Sean Connery). 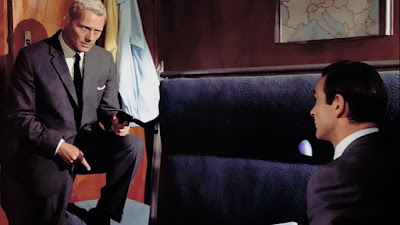 4. The Deadly Affair (1966) - the cast of James Mason, Simone Signoret, Maximillian Schell, Harry Andrews, Kenneth Haigh and others bring class to this yet one more ‘Cold War’ drama. The film received several BAFTA nominations and the cast is top notch. London places again make up the ‘set’ and there are Chelsea and Clapham locations, as well as central St. James’s Park. The spy genre seems to allow any slowness of plot to build up suspense and everyday locations provide realism, as well as allowing us to identify with the characters, as we also recognize familiar streets and buildings. 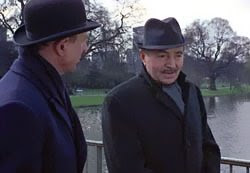 5. The Tamarind Seed (1974) - this underrated movie - again with a John Barry score - holds attention until the very end, in order to find out whether Omar Sharif is a double agent. Shooting took place in Barbados and also Paris, but the London locations provide the perfect background for anonymous characters and the promise of action in far more exotic locations. In one scene, the camera is pointed at a tiger in a cage in the park and as the animal walks round it neatly reveals Julie Andrews and Anthony Quayle. The following airport scenes are exciting and throughout the film the contrast of the big cities with the tropical island provide excellent visual contrasts. Sylvia Syms, Oskar Homolka (his last film) and Bryan Marshall make up a strong cast and Les Crawford, a KGB agent, was always Roger Moore’s double in the days of TV’s “The Saint”. 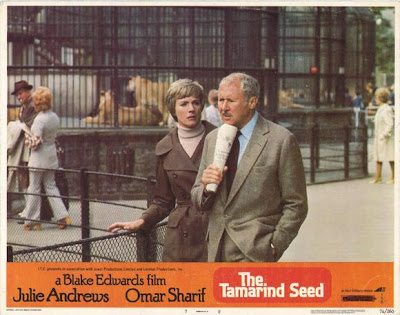 A heartfelt Thank You to Roger for sharing his list. Roger is currently in Portmeirion, where The Prisoner was filmed. Check out his websites for more information about how to join him on a tour in the future.
Spy Vibers, what are your most memorable sets from Spy Film/Tv?
Posted by Jason Whiton at 5:39 PM