Its always interesting to look at cross-pollination in pop culture, and the music scene in the early-mid 1960s was no exception. British kids inspired by African-American artists dedicated themselves to a mission: to honor their heroes by playing American roots music with reverence, and by citing their sources during concerts and television appearances. Kids like The Beatles, Clapton, and the Stones helped to spread the gospel, as it were, and they turned on a wider audience to their heroes, who had been, up to that point, limited to black labels and small venues. The Brits essentially reintroduced North America to its own largely forgotten and ignored culture and made it mainstream. And where artists like Howlin Wolf and Jimmy Reed found new success during the era, there were a few musicians who had already broken through the barriers in the States by crossing over to Rock and Roll in the early days of the form. I'd like to return today to one such hero -an old Spy Vibe favorite- Bo Diddley! Where would the 1960s have been without his trademark beat? And just to set the record straight, these are but a few of the UK acts who covered Bo: The Yardbirds, The Who, The Animals, The Shadows, The Rolling Stones, The Pretty Things, The Kinks, The Merseybeats, Manfred Mann, The Birds, and the Liverbirds. 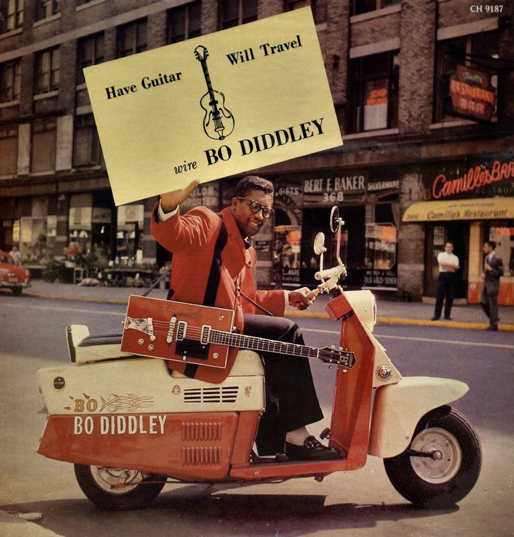 Elias McDaniel (1928-2008) moved from Mississippi up to Chicago as a young boy, where childhood pals gave him the nickname "Bo Diddley." The name stuck as a moniker through some early years as a fighter and onto the stage as a musician. Bo dreamed about pounding out traditional drum patterns and, inspired by John Lee Hooker, soon took to the guitar as a percussive instrument. This was the era in Chicago when Chess and VeeJay were pumping the airwaves with the sounds of John Lee Hooker, Muddy Waters, Howlin Wolf, Jimmy Reed, and newcomer Chuck Berry. Bo knew that he couldn't do what they did on the guitar, so he went back into his corner (as he puts it in interviews) and figured out his own trade-mark approach to playing. That drummer instinct came through strong and we have what is now commonly called "The Bo Diddley Beat" - a Rumba-style rhythm that added the Hambone playfulness of banging out beats and rhymes. Bo didn't invent it, per se, but he certainly popularized it. Spy Vibers can hear some really raw iterations of the beat in the fife and drum music of northern Mississippi, for example. 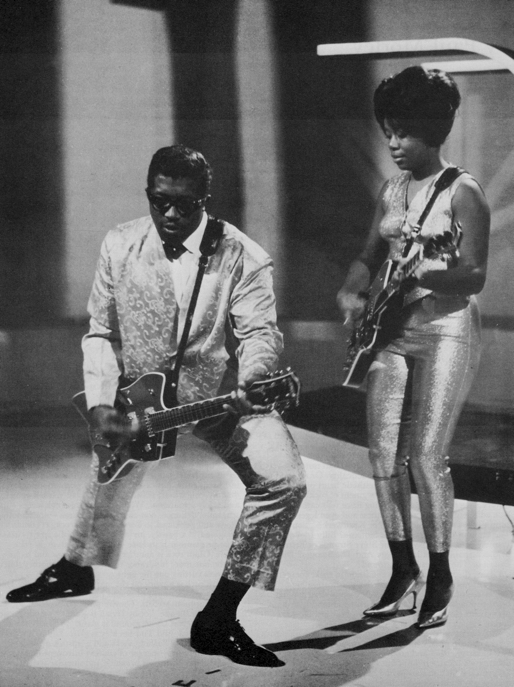 Bo's side-guitar player left for the service in 1956 and was replaced by a female musician named Peggy Jones ("Lady Bo"). She established a swinging stage vibe with Bo Diddley and is known as one of the first female lead guitarists. The uncommon site of their male/female act, accentuated by the two rectangular guitars, was quite sizzling (and even erotic). Lady Bo was replaced in 1962 by Norma-Jean Wofford ("The Duchess"/above), who continued to boogie with Diddley as a rocking lady strummer. Together they made quite a few television appearances between 1962-1966 that captured their contagious, throbbing beat and cool moves- not to mention the stage-side Go Go dancers and teen audience! Check out some throbbing Bo Diddley beat below. In other news, check out my episodes of the Cocktail Nation radio show, where I introduce classic spy films/TV series and play soundtracks and rare cuts: Episode #1 (Danger Man) and Episode #2 (The 10th Victim), Epsiode #3 (On Her Majesty's Secret Service), Episode #4 (Roger Moore/The Saint), and Episode #5 (The Avengers). Episode #6 (The Prisoner). Enjoy!