Dean Martin was born on this day in 1917. The crooner/actor is best remembered by Spy Vibers for his role as Matt Helm in the film series from the 1960s. Based on the popular novels by Donald Hamilton, Martin portrayed the character in four films: The Silencers (1966), Murderer's Row (1966), The Ambushers (1967), and The Wrecking Crew (1969). Noted by Mike Myers as an inspiration for Austin Powers, Martin's Matt Helm played up the camp and swinging 60's conventions that were being established during the spy boom. His gadgets included a revolving bed that tipped him into a giant bath and mini-bars stashed in every location he might frequent (including his car). One of my favorite elements of the films is the use of experimental and mod fashion. The audience is often treated to a fashion shoot with models dressed in imaginative (and revealing) outfits, and female spies sometimes get to wear gun bras ("booby traps," quips Martin) ala Mike Myers' fembots. Simply put, the movies are a hoot! Happy birthday Dean Martin! What a lovely voice and legacy of laughs and classic recordings. 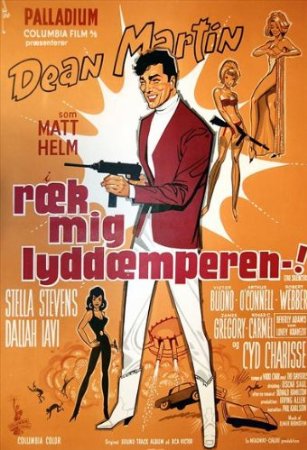 Can you help to support Spy Vibe? Please make a small donation with our secure Paypal tip-jar link at the top left of the main page. Nothing is too small to help cover the increasing bills for the domain, web-forwarding and other costs to maintain the site. Thank you!
Posted by Jason Whiton at 12:57 PM