On the heels of Dr. Strangelove (1964), Easy Rider (1968), Barbarella (1968), and Casino Royale (1967), writer Terry Southern teamed up with Ringo Starr and Peter Sellers to create The Magic Christian (1969), a satire that offered social commentary about greed and classism and a film that captured a society spinning out of control by the end of the 1960s. The movie was just released on Blu-ray. Ringo Starr, who also appeared in Southern's Candy (1968), stars as Youngman Grand, a homeless youth who is inexplicably adopted by provocateur, Sir Guy Grand, played by Peter Sellers. The two embark on a bizarre journey through Sir Guy's business and social circle, thumbing noses at convention and exposing snobbery.

The Magic Christian is also celebrated by Beatles fans for its Paul McCartney and Badfinger soundtrack, which featured the theme song, Come and Get It. Magic Christian Music was remastered in 2010. Other stars who appear in the film include Richard Attenborough (The Sand Pebbles, The Great Escape), Laurence Harvey (The Manchurian Candidate, A Dandy in Aspic), Christopher Lee (Man With the Golden Gun, Hammer Horror, Star Wars, Lord of the Rings), Spike Milligan (Sellers' partner in The Goons), Roman Polanski, Raquel Welch (Bedazzled, Fathom), John Cleese and Graham Chapman (Monty Python), Peter Graves (Mission Impossible),  and Yul Brynner (The Magnificent Seven, Westworld). Spy Vibe has often celebrated the satire and surrealism boom in England in the 1960s, which included artists like Peter Sellers and The Goons, Peter Cook and Dudley Moore (Beyond the Fringe), Richard Lester, John Lennon, and Monty Python. More here.

The Blu-ray edition of The Magic Christian was released by Olive Films with a nice AVC encoded 1080p transfer in 1.78:1 and a lossless DTS-HD Master Audio Mono track. Amazon page here. Fans of The Beatles and Peter Sellers should also check out the many Beatles tunes recorded as humorous spoken-word pieces by Sellers, the most infamous being a version of She Loves You in the voice of Dr. Strangelove! "She said she loves you. Ja? Ja, Ja, Ja." 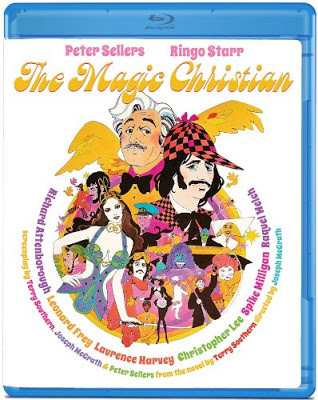 Can you help to support Spy Vibe? Please make a small donation with our secure Paypal tip-jar link at the top left of the main page. Nothing is too small to help cover the increasing bills for the domain, web-forwarding and other costs to maintain the site. Thank you!
Posted by Jason Whiton at 3:03 PM