Two Blu-ray editions of John le Carre thrillers have just been announced. If your spy vibe is Cold War/Berlin Wall/George Smiley stories, this is for you! Criterion posted their upcoming Blu-ray projects today, and among the list of films due in September is The Spy Who Came in From the Cold (1965) starring Richard Burton. The Blu-ray features a new high-definition film restoration with uncompressed mono soundtrack, a new exclusive interview with John le Carre, scene commentary by the director of photography, a BBC documentary, and much more. And the big news for fans of the BBC Smiley/Alec Guiness programs is that Acorn Media has announced that they are releasing Smiley's People as a follow up to last year's hi-def edition of Tinker, Tailor, Soldier, Spy. This classic sequel to Tinker will hit shelves on August 6th.

The other news on the Blu-ray front is a huge sale happening right now on Criterion Collection movies. Best Buy started the trend and Amazon has been price-matching titles as low as $14.99 for Blu-ray discs. Info here. If you are looking to add to your library, now is a great time to pick up these classics! Spy Vibe recommends: Ministry of Fear, Fritz Lang's M, Robinson Crusoe On Mars, Yojimbo, Sanjuro, The Seventh Seal, Night of the Hunter, The 39 Steps, The 400 Blows, 8 1/2, Amarcord, Black Orpheus, Branded to Kill, Charade, Diabolique, Godzilla, Harold and Maude, If..., Island of Lost Souls, Ivan's Childhood, The Lady Vanishes, The Man Who Knew Too Much, Merry Christmas Mr. Lawrence, Mystery Train, Orpheus, Quadrophenia, Repo Man, Rosemary's Baby, Solaris, Tokyo Drifter, Wings of Desire. Save and have a summer SPY VIBE marathon. Criterion cover art below. Fans of Batman and Andy Warhol, don't miss our last post here. 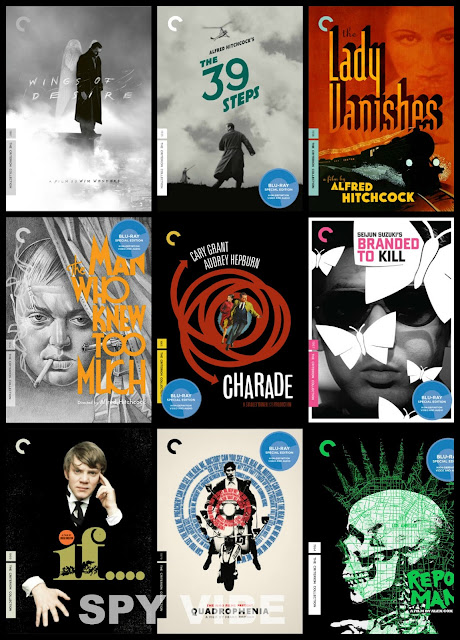 I have a spy novel coming out. Get ready to meet MIKI ZERO, a Japanese fashion model and spy from 1965! More info at Jason Whiton's website here.

Can you help to support Spy Vibe? Please make a small donation with our secure Paypal tip-jar link at the top left of the main page. Nothing is too small to help cover the increasing bills for the domain, web-forwarding and other costs to maintain the site. Thank you!
Posted by Jason Whiton at 3:15 PM