Happy 91st Birthday to Christopher Lee! Lee has played most of the greatest villains and monsters in cinema, including Fu Manchu, Dracula, Frankenstein's Monster, the Mummy, Saruman, and one of my fave 007 baddies, the assassin Francisco Scaramanga(who had great taste in secret lairs, by the way!) in The Man With the Golden Gun (1974). Celebrate his birthday with some of his cool performances on Netflix: The Wicker Man (1973), Horror of Dracula (1958), Lord of the Rings: The Two Towers (2002), Gormenghast (2000), The Blood of Fu Manchu (1968), The Castle of Fu Manchu (1969), and The Avengers TV episodes Never Say Die (season 5 disc 4) and The Interrogators (season 6 disc 5). You can also sit with Lee and hear about his career in The Many Faces of Christopher Lee (1996). Amazingly, Lee's co-star in many Hammer Horror productions Peter Cushing was born one day earlier on May 26! Check out their spooky history together at the Hammer Films. 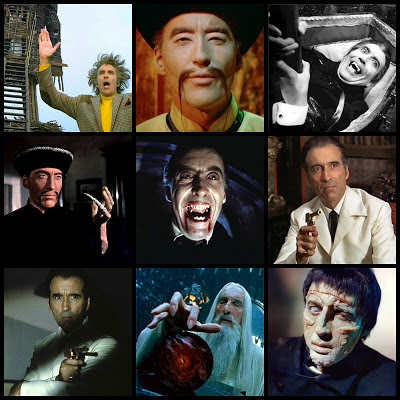 Can you help to support Spy Vibe? Please make a small donation with our secure Paypal tip-jar link at the top left of the main page. Nothing is too small to help cover the increasing bills for the domain, web-forwarding and other costs to maintain the site. Thank you!
Posted by Jason Whiton at 8:13 AM