If your vibe is master criminals in the tradition of Fantomas, Dr Mabuse, and Diabolik, then you probably are familiar with the skeleton-costumed terror, Kriminal. Kriminal appeared in Italian comics and cult films in the 1960s, and like the anti-heroes listed above, offered an exciting cocktail of intrigue, thriller suspense, pop-art violence, and spy-style action. The character was the brainchild of Max Bunker, who faced censorship for his books, Kriminal and Satanik, due to violent content. The maestro of swinging Italian soundtracks, Piero Umiliani, scored Il Marchio Di Kriminal in 1968. The recording was lost and long out of print, but Screen Archives Entertainment discovered the master tapes in March of this year! They plan to release a limited-edition CD next week. Only 500 copies will be made! Read below about SAE's previous efforts to hunt down and restore other Kriminal sound artifacts. Follow the trail of costumed baddies here. Images from Spy Vibe's DIABOLIKAL board on Pinterst. 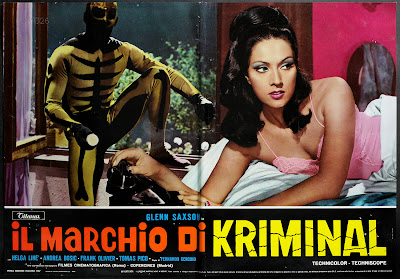 From SAE: "A very long period of research finally concluded with this release. A chapter that began nearly 50 years ago with the release of the 45 rpm of KRIMINAL (1966) by Roberto Pregadio and Romano Mussolini on the Beat label, featuring music from the score of the first of the two movies dedicated to the popular comic character created by Max Bunker in the ‘60s. The story of the original soundtracks from the movies inspired by the popular comic book author has a very long trail. The first chapter is the 45 rpm of KRIMINAL, much sought-after by both soundtrack and comics collectors (I still remember processions of fans coming to the Beat studio, some just looking for the 45rpm jacket only!!!), followed in March 2006 by the release of the complete score after the unexpected discovery of the original master tapes—for years, they had been hunted everywhere and then, all of the sudden, we found them in our own studio, right under our nose…incredible!!!! 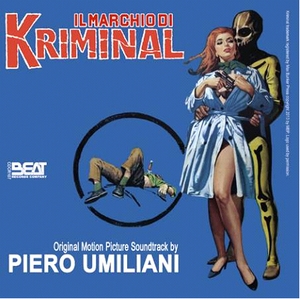 Max Bunker-mania had just exploded, so we began looking for the score for SATANIK (1967)—another film based on a Bunker comic—in which the main character (played by Magda Konopka) is Kriminal’s popular female alter-ego. The score for SATANIK was again composed by Roberto Pregadio and Romano Mussolini. An archived copy popped up in Aberbach’s dusty archives, a society whose master tapes were administered by Beat in the late ‘60s (!!!!!). 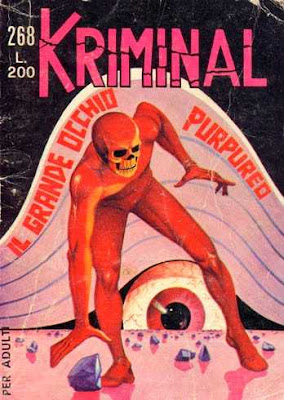 And that’s how what survived hidden for so many years finally saw the light in July 2006 after just 4 months: a real one-two punch! We were only missing the score for IL MARCHIO DI KRIMINAL (1968), directed by Fernando Cerchio and direct sequel to the first KRIMINAL which was directed by Umberto Lenzi. The master tapes? Obviously missing, until the day our eyes fell upon a list of master tapes in the Umiliani estate’s archive—in plain sight on the list was the word “Kriminal.” It was March 2013 when two very well-preserved master tapes emerged from a dusty archive, enabling us to complete the circle with the release of the 3rd and final score dedicated to Max Bunker’s characters.
What else can we say? The Maestro’s score for this spy movie with a somewhat ironic flavor is as usual of the highest quality—a real rejuvenation for the music of the popular Tuscan composer, well deserving of this release and further evidence of the milestone accomplishments of this extraordinary artist. 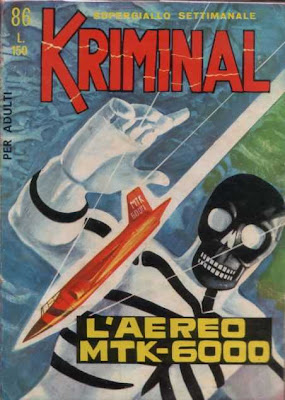 Thanks to the invaluable assistance of Stefania Baffa and Francesco Argento, it’s with great pleasure that we release the last chapter of a story begun many years ago, one that you absolutely can’t miss and about which we want tell you too much—pleasant surprises await you when you receive your copy!
The CD is released in a jewel case, with mastering by Enrico De Gemini, graphic design by Daniele De Gemini & Alessio Iannuzzi, and liner notes by Francesco Argento on the music, the movie and the Kriminal comic." Spy Vibers might recognize this skeleton/dagger motif from Richard Chopping's 1961 cover illustration for Thunderball by Ian Fleming (below). 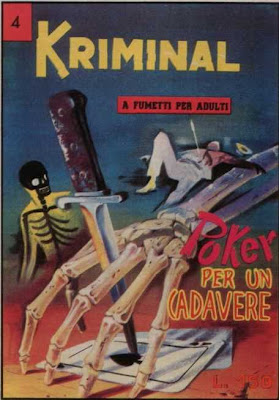 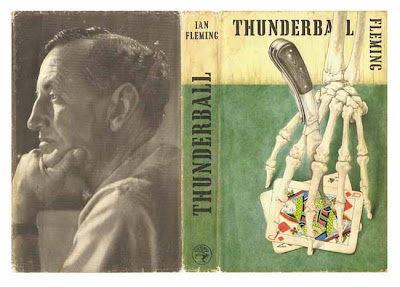 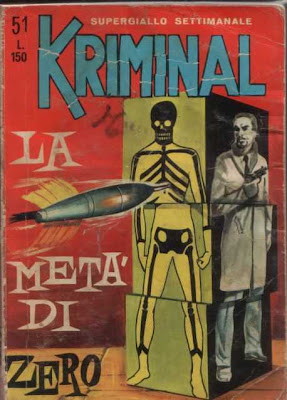 Want to support Spy Vibe? Please make a small donation with our secure Paypal tip-jar link at the top left of the main page. Nothing is too small to help cover the increasing bills for the domain, web-forwarding and other costs to maintain the site. Thank you!