Can you imagine seeing a familiar book jacket, like one of the Harry Potter designs, appearing on the cover of another novel? In the fast-paced world of freelance illustration, it was apparently not uncommon for artists to squeeze as much out of their work as possible, or for illustrators to turn in assignments based on another artist's work. Spy Vibe recently uncovered a number of James Bond doppelgängers where this kind of double-dipping occurred (see our post here). I just came across another double 007 jacket. Artist Tom Adams contributed his surreal painting to the first James Bond continuation novel, Colonel Sun by Robert Markham (Kingsley Amis), published by Jonathan Cape in 1968. Two years later, the same painting appeared on the cover of Timepivot by Brian Ball, published by Ballantine in 1970. I've sent a note out to Adams to see if anyone recalls how this image was licensed. I'll post an update if I receive more information. It's interesting how we associate stories with cover art, yet the same image must evoke different memories for different readers. This particular painting by Tom Adams is like a shifting portal that can transport readers back to alternate worlds (see book synopses below via James Bond Wiki and Fictiondb). 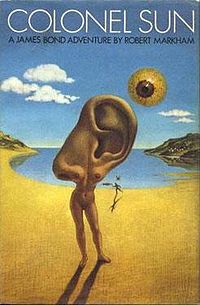 Colonel Sun: "After his superior officer in the British Secret Service, M, is violently kidnapped from his house, Quarterdeck, James Bond follows the clues to Vrakonisi, an Aegean island of Greece, where he teams with Ariadne Alexandrou, a Greek Communist agent working for the Soviet Union. Together, they plan to rescue M while thwarting the complex military-political plans of People's Liberation Army Colonel Sun, the Chinese agent sent to sabotage a Middle East détente conference, of which the Soviets are hosts, and implicate Great Britain." 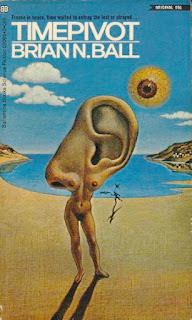 Timepivot: "Time drifted onto the ruin of the Galactic Federation. The centuries rolled over the wars of the first part of the new millennium, laying their patina of forgetfulness over the adventures of the survivors of the expedition to the Forever Planet. Only in the memory banks of lost and ruined computers was there a record of the writhing piece of time, hung in its weird universe, poised in a matrix of forever, which had waited eons to release its makers from their imprisonment on a planet which was their plaything, workshop, laboratory and engine. No one returned to the planet of the Timepivot. Not of his own volition." 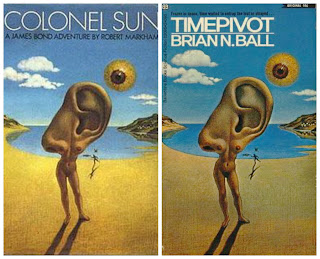 Can you help to support Spy Vibe? Please make a small donation with our secure Paypal tip-jar link at the top left of the main page. Nothing is too small to help cover the increasing bills for the domain, web-forwarding and other costs to maintain the site. Thank you!
Posted by Jason Whiton at 7:11 PM