Happy Birthday to writer Dashiell Hammet. Born on this day in 1894, Hammett is best remembered for his hard-boiled fiction and screenplays. Many enduring characters sprang from his fertile imagination, including Sam Spade (The Maltese Falcon), The Continental Op (Red Harvest), and Nick and Nora Charles (The Thin Man series). He also teamed with artist Alex Raymond (Flash Gordon) to create the comic strip Secret Agent X9 in 1934. The author's life was loosely depicted in the films Julia (1977) and Hammett (1982). 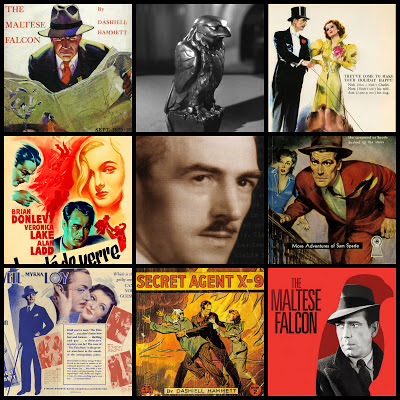 Can you help to support Spy Vibe? Please make a small donation with our secure Paypal tip-jar link at the top left of the main page. Nothing is too small to help cover the increasing bills for the domain, web-forwarding and other costs to maintain the site. Thank you!
Posted by Jason Whiton at 10:26 AM