Event alert: OMD show on June 19th! Spy Vibers might be interested in an upcoming concert by Orchestral Manoeuvres in the Dark, who are raising funds to help support their crew during these tough times for performing arts workers. Tickets to see the show on-line are available at the band's website here. Coincidentally, it was exactly one year ago today that I posted a short piece about an OMD listening party and the band's modernist aesthetic. For those who might have missed it: I really enjoyed an album event yesterday held on Twitter, as part of the listening parties hosted by Tim Burgess of the Charlatans. We had a chance to listen to Dazzle Ships (1983) by Orchestral Manoeuvres in the Dark (OMD) with co-founder and singer, Andy McCluskey. Dazzle Ships always been a favorite record of mine because it's so steeped in concepts around graphic design, history, experimental music, and cold war commentary. Andy shared background info during the event about the tracks, how various sounds were made, and he even hinted at an exhibit of some kind planned for 2022 (but no context re: the contents). Andy has often drawn themes and lyrics from his own studies into history, society, and art, and this record was like a sonar reading of technology and politics in the 20th Century. About "Radio Waves" (track 10), he said, "It contrasts the potentially positive power of communication technology with the sad reality of Cold War lies and military escalation." Interestingly, the design concepts by Peter Saville for the album were originally based on a 1919 painting by Robert Hewison of the original "dazzle ships" in WWI. The concept was to confuse the enemy's perception of a ship's course on the water by using fractured, surreal camouflage. As Smithsonian reported on the anniversary of WWI and Dazzle inventor Norman Wilkinson: "Wilkinson’s innovation, what would be called “dazzle,” was that rather than using camouflage to hide the vessel, he used it to hide the vessel’s intention. Later he’d say that he’d realized that, “Since it was impossible to paint a ship so that she could not be seen by a submarine, the extreme opposite was the answer – in other words, to paint her, not for low visibility, but in such a way as to break up her form and thus confuse a submarine officer as the course on which she was heading.” In our current time of disinformation and Orwellian doublespeak, this whole notion of manipulating perception is quite sobering, but I do find the designs beautiful and intriguing. There was an exhibit in 2019 held at the Museum of Contemporary Art Tucson called Dazzled:OMD, Memphis Design, and Beyond that featured an OMD installation based on the Savile designs, as well as art and design by Peter Shire, Carrie Schneider, Miho Shimizu, Natalie Lanese, and the Memphis design group from Milan. OMD crafted their album with early electronics, sound collage, and musique concrète (including surfing through short-wave transmissions of Radio Prague and international speaking clocks), and these aesthetic choices provided a rich and textured landscape to communicate their ideas. The record tour included set designs based on the sleeve art. Sadly, few photos seem to remain to document the shows and apparently film footage was lost. My big hope is that the band will release an anniversary book in 2023 to document all of the artwork and prototypes from the many sleeves, ads, programs, etc. OMD hailed from the Wirral, Merseyside, and were one of the bands that launched through Eric's, a club on Matthew Street across from The Cavern in Liverpool (others in the scene were Elvis Costello, Joy Division, and Echo and the Bunnymen). To make their music possible to play live, they originally performed with a TEAC 4-track tape recorder, which they dubbed "Winston." OMD's intentions were experimental, yet they soon found themselves part of a growing New Wave of musicians that would redefine the pop world though the use of new technologies. OMD has created many great albums, but Dazzle Ships was a masterpiece. At the time it was perhaps seen as too arty, and it's low commercial response prompted the band to move further toward a pop sensibility. There were some years when Andy carried on alone. Co-founder Paul Humpheys formed The Listening Pool and collaborated with then-partner Claudia Brücken (Propaganda) as Onetwo. OMD reunited again in 2006 for some live projects, which led to a new renaissance period of recording and touring with the original line-up. In 2015 they did a special performance of Dazzle Ships at the Museum of Liverpool (a fitting location to honor their artistic roots, as well as a favorite place of mine). OMD are still going strong. Recommended listening: Orchestral Manoeuvres in the Dark (1980), Organization (1980), Architecture and Morality (1981), Dazzle Ships (1983), Junk Culture (1984), Peel Sessions 1979-1983 (2000), History of Modern (2010), English Electric (2013), The Punishment of Luxury (2017). Check out the recent book, OMD: Pretending to See the Future. Below: Saville designs and my collage of some of the great modernist OMD sleeves. Enjoy! 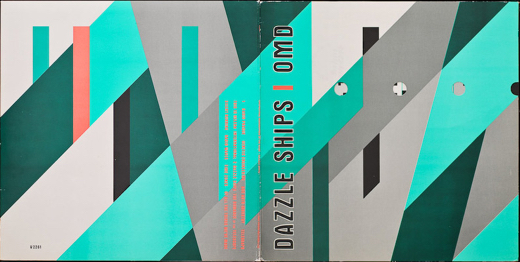 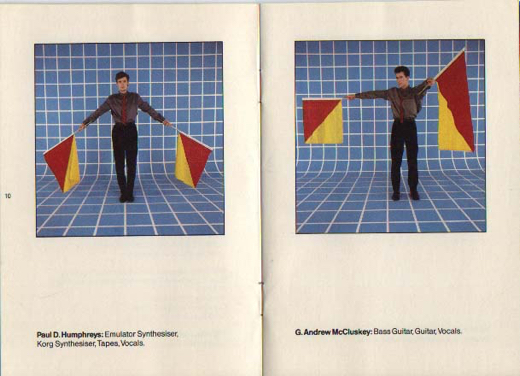 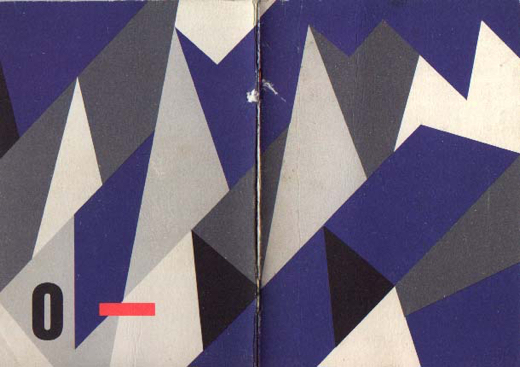 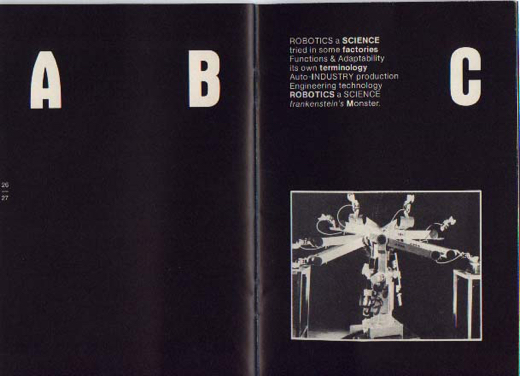 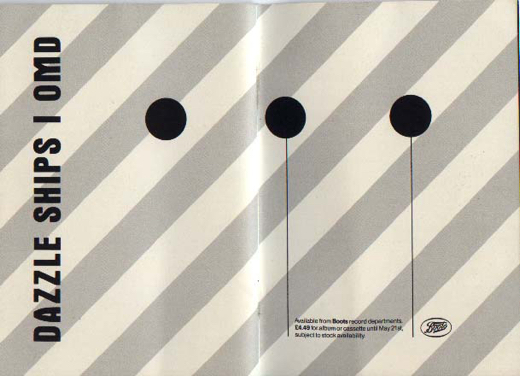 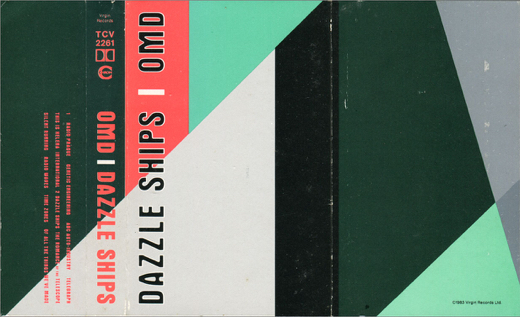 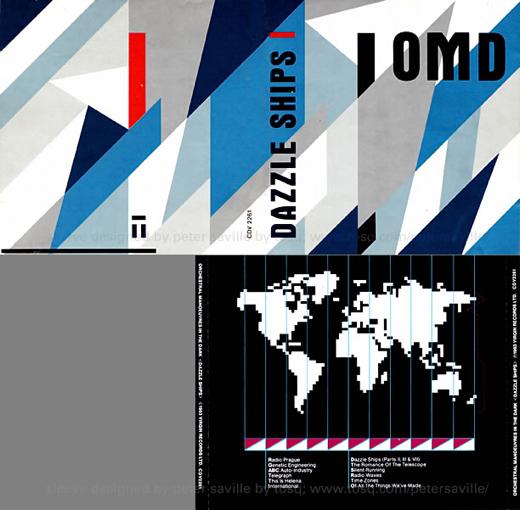 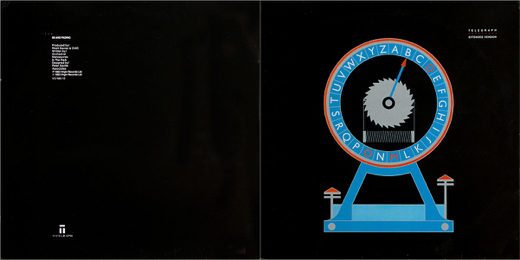 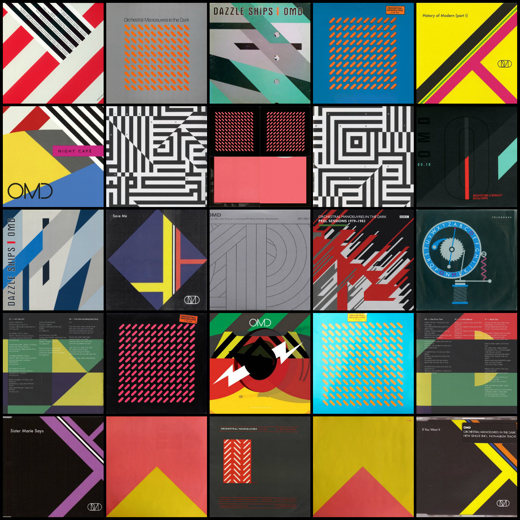