Actress Diana Rigg was born on this day in 1938. She spent her early years in India, returning to England at age eight. Rigg began her training at RADA in 1955. Her first big break on television was in a 1963 episode of Sentimental Agent. Broadcast two years prior to her debut as Mrs. Emma Peel on The Avengers, the young actress already displayed her trademark gravitas, sharp intelligence, charming wit, and powerful independence. As Peel, she introduced new fashions to television viewers, such as Mod geometric patterns designed by John Bates, black leather catsuit, and in her second season, brightly colored stretch jersey catsuits that were licensed for sale in shops. Following her seasons on The Avengers (1965-1968), Rigg starred in numerous stage productions, films, and television shows, including her own series, Diana (1973-1974), and her famous role as a Bond Girl in On Her Majesty's Secret Service (1969). She appeared most recently in Victoria, Game of Thrones (winning an Emmy Award), and she played her daughter Rachael Stirling's fictional mom in Doctor Who and  in the fantastic series, The Detectorists. "I don't want to retire," she said in recent years. "I never want to retire. What's the point of it?" Rigg made a rare appearance at the BFI in 2015 to celebrate the 50th anniversary of her time on The Avengers. She also became a grandmother in 2017! She expressed an interest in returning to the Royal Shakespeare Company and a recent return to Broadway in a production of My Fair Lady earned her a Tony Award. Diana Rigg passed away last fall at 82. Her daughter, actress Rachael Stirling, said a cancer diagnosis came in March '20 and that Dame Diana "died peacefully in her sleep early this morning, at home, surrounded by family... She spent her last months joyfully reflecting on her extraordinary life, full of love, laughter and a deep pride in her profession." For many, Emma Peel was a first crush, and I suppose I would have to make that claim, too. But for me, watching the show as a seven-year-old, the attraction was the character's intelligence, warmth, humor, and martial arts skills. She was stunningly beautiful, yes, but she was also the ideal platonic companion, ever-ready for adventure and the champion for any situation. My friend Rodney Marshall (son of Avengers writer Roger Marshall) once summed her up perfectly on a Facebook post: "Beautiful, but never decorative. Cool, but never cold. Worldy-wise, but never cynical. Emma Peel turned karate, a flick of the hair and cat suits into art forms, a raised eyebrow into a statement. She was intellectually and physically superior to her male counterpart. No female action adventure character will ever come close to matching her. No actress could have played the part better. Iconic." Learn more: Rigg published a book, No Turn Unstoned, in 1983, and her biography was published in 2004 by Kathleen Tracy. Related posts: Diana Rigg Motor Show, Shakespeare Spies Rigg, Rigg eBook, Avengers Season 5 Titles, Avengers Interview: Michael Richardson, Avengers Interview: Rodney Marshall I, Avengers Interview: Rodney Marshall II, Rare Avengers Scripts, Lost Avengers Released, Season 5 Blu-ray speed comparison, Shakespeare Spies: Diana Rigg, Diana Rigg at 76, Jean Varon Fashion, Mini-Killers, Mrs. Peel Audio Dramas. 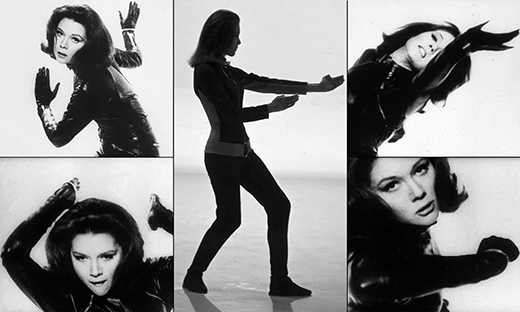